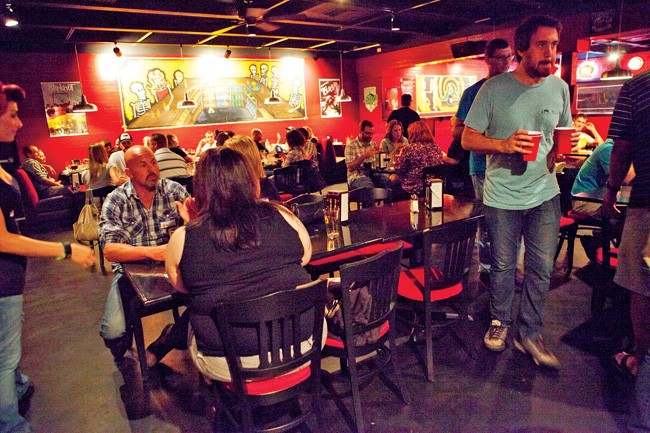 If the SuicideGirls took their alterna-geek pinup aesthetic into the hospitality industry, the resulting place of business might resemble Oblivion Taproom, a beer-and-burger joint in the former Straub’s Fine Seafood space on East Colonial. The building, once a draw for fans of the early-bird special, has been transformed into a spacious red-and-black dungeon patrolled by pierced and tattooed girls-next-door and adorned with enough skeletal art to titillate the creepiest college anatomist. But beneath the badass veneer lies a band of dedicated culinarians who take beer and bar food quite seriously. Facade aside, Oblivion isn’t a place to drink oneself into a stupor; it’s a place to chill. A gastropub? Not quite. Oblivion still appears to be finding its identity as a bar-slash-eatery, but the taproom isn’t short on character.

Eclectic music is played at a decent enough level to allow for chats, like the one we had with our server about their use of plastic utensils instead of stainless steel. Evidently, the aging septic system is to blame; until it’s replaced, patrons must settle for plastic – hardly an inconvenience, considering burgers and finger foods are the menu’s focus.

Chef Jim Goodman, though a barbecue, charcuterie and butchering aficionado, still finds it in his beefy heart to throw a bone to vegetarians. We felt seitan’s pull and gave the “bites” ($7) a go, ordering them “treachery” hot. The nuggets of fried wheat gluten were reminiscent of Ale House’s zingers, but seitan’s inevitable sogginess may lead herbivores to prefer the black bean burger ($9). And should veggies still feel left out, soy or black bean patties can be substituted in any of Oblivion’s burger offerings.

Beef burgers, it should be noted, are made fresh (not frozen), and are densely packed, not finely minced. These patties are weighty, and when stacked with gourmet toppings, they become Guy Fieri-style works of art. If the pretzel burger ($9) isn’t the Badger State’s contribution to world cuisine, it should be: The warm pretzel bun is slathered with caraway beer mustard and comes served with a side of cheese sauce. Side spud of choice: crisp tater tots served with sweet, vinegary house-made ketchup.

Not to be outdone, the “Jalapineo” ($11) is fashioned from a teriyaki-marinated patty slapped with a thick jalapeño cream cheese and crowned with grilled pineapple, applewood-smoked bacon and a passion fruit aioli, all on a brioche bun. Personally, I found it next to impossible to finish the thing, which makes the presence of “The Fatass” ($25) all the more remarkable. A beef and Italian sausage patty anchors a manwich laid with two fried eggs, chopped pork, tasso ham, chicharrónes, smoked blue cheese, Cheez Whiz, sharp cheddar, griddled onions, jalapeños and pickles. Oh, and bacon. All served on a garlic bun. Anyone who finishes it can’t possibly be human.

Fried pickles ($7) and onion rings ($7) were outstanding, thanks to a crisp batter made with beer straight from one of the taps, of which there are 40. More than a handful of drafts were unavailable, but there’s plenty here to keep beer connoisseurs slaked – Bell’s Special Double Cream Stout, for example.

Desserts were nonexistent the night we visited, but I’m looking forward to sampling the Chocolate Piggy Beer Float with house-made bacon ice cream. I can’t think of a better way to fade into oblivion than to indulge in a devilishly delicious end to a sinfully gluttonous meal.