Playfest's centerpiece performance is a comic, yet compelling, look at a historical figure 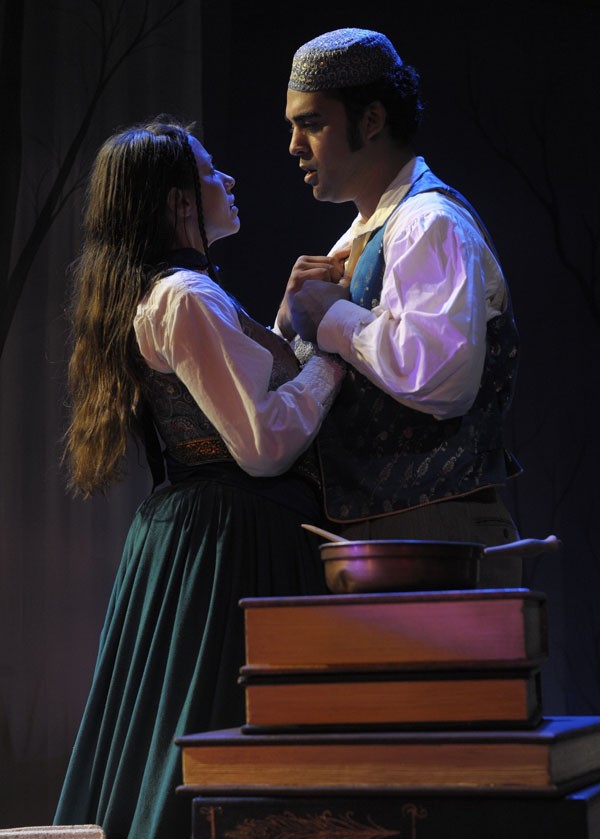 An institution dedicated to someone who's been dead since 1616 isn't the first place you'd expect to find previously unproduced plays by living writers. But the Harriett Lake Festival of New Plays, better know as Playfest, is back at the Orlando Shakespeare Theater from April 8 through 17, bringing with it workshops and readings of never-before-seen scripts, along with a keynote event featuring local playwright Mark Brown (The Trial of Ebenezer Scrooge) and the annual Fringe Festival-sponsored "Play in a Day," a show-making marathon in which a series of short plays are written, rehearsed and performed within 24 hours.

Charm, the fully staged production that is the centerpiece of this year's Playfest, opened on March 23, well in advance of the festival. It begins with a simple declaration: "I hate  this dress."

That may sound like an innocuous statement today, but in the 19th-century era of Margaret Fuller - the historical heroine of playwright Kathleen Cahill's factually inspired new script - it was practically a declaration of war. Fuller, fascinatingly embodied here by Katherine Michelle Tanner (last seen at Shakes as Laura in 2008's Glass Menagerie), isn't a conventional beauty. In the play, Fuller describers her "wide forehead," "deeply set eyes" and "large nose"; she resembles Alanis Morissette in a bustle. But her piercing intellect and fearless flaunting of contemporary convention imbue her with a peculiar "charm" that draws men like "moths to a flame."

A Latin-educated poet and essayist in an era when women were expected to be silent spouses, Fuller is invited to contribute to the influential mid-1800s literary journal The Dial, over the objections of its misogynistic founder, Orestes Brownson (Trent Fucci). Relocating to Concord, Mass., she becomes embroiled in an awkward love quadrangle with America's most famous Transcendentalists - iconoclastic authors who promoted a new non-conformist brand of spirituality. Ralph Waldo Emerson (Eric Zivot), saddled with a wife (Allison DeCaro) who only scowls and shrieks, finds his arctic frigidity defrosted by Fuller, and in a fit of "violent fondness" asks her to edit his papers. Nathaniel Hawthorne (Walter Kmiec) is too bashful to even mention his fiancee, but Fuller inspires him to overcome his writer's block with an idea about scarlet scandal. Impish Henry David Thoreau (Brandon Roberts) shares Fuller's fascination for insects and skinny-dipping, but he's possibly tubercular and/or homosexual. She bonds with Sam Ward (Avery Clark) over his collection of pornographic Rembrandts, but he soon absconds with Anna Barker (Kelli Rose Sleigh), an operatic diva who stirs Fuller's Sapphic side. Frustrated with her failure in finding love and companionship, she becomes the New York Tribune's first female war correspondent, writing pulpy dispatches from the front lines of the Italian revolution while learning the lingua franca from an amorous local count.

This tragic tale of a pioneering proto-feminist may sound a bit too fraught and fussy to be much fun, but fear not: Cahill's take on Fuller is more farcical fantasy than heavy history. In the hands of director Patrick Flick, Charm feels like children's theater for literature majors. (If you aren't up on your transcendentalism, take a pre-curtain moment to read the helpful program notes.) Skirts billow to impossible size, a statue of Descartes springs to life offering advice and subtitles are provided by a cue-card-carrying spangled showgirl. Fuller herself is so "ahead of her time" that she indulges in high-fives and other absurd anachronisms. Robin Watts' scrim-heavy set, dominated by oversized books and cracked Doric columns, along with Eric T. Haugen's impressionistic lighting (accented by falling snow and leaves) add greatly to the staging's dreamlike quality.

Not every scene-ending punch line is properly punctuated, and the fantastical froufrou occasionally threatens to render frivolous Fuller's groundbreaking stands on female equality and human rights. But with Tanner's lively performance - supported by fine work from the rest of the company - at its core, Charm is a comic, yet compelling, look at a largely forgotten pioneer whose influence is still felt today.