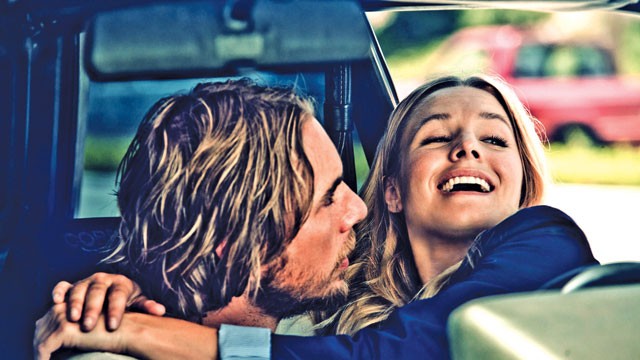 The stars of Hit and Run, a half-baked cross-country romp in the style of smirking, for-the-hell-of-it '90s flicks like The Chase and Excess Baggage, are a thoroughly likable bunch. Of course, as stars that's kind of their job, but in recent years, talents I'd mentally written off as the minor kind have found these weird little grooves that I've just completely fallen for. Dax Shepard, the formerly dopey sidekick to Ashton Kutcher on Punk'd, for example, has soared on NBC's Parenthood, where his clashes with his son's mother, played with big empathy by Hit and Run co-star Joy Bryant, reveal deep reservoirs within both actors.

Similarly, Kristen Bell, who happens to be Shepard's real-life fiancee, too often finds herself in roles that require her to be less intelligent and funny than she is when she's not acting. That was made clear by a spate of appearances abroad when The Late Show With Craig Ferguson went to Paris last summer. Ferguson and Bell, backdropped by the City of Light, hit a rom-com groove that proved them unlikely late-night soul mates – a vibe that much more expensive productions (When in Rome, anyone?) failed to elicit. Hell, even Hit and Run co-star Tom Arnold has his brilliance: He and real-life pal Shepard were, believe it or not, fascinating together on the Doug Loves Movies podcast back in 2009, and Arnold just recently made a splash with a heartfelt appearance on Comedy Central's Roast of Roseanne. And here's a piece of trivia: Arnold is partly responsible for the success of Joss Whedon, because he stuck up for him in the Roseanne writer's room when his then-wife went on her famous rampages. And need I mention that one of the greatest supporting turns ever was Arnold's in True Lies?

So back to Hit and Run, which is written and co-directed by Shepard and puts all this talent on the road for some cheesy '90s mayhem. Sounds great, right? Well, it's not. But it's sort of good! In a way.

Shepard plays Charlie Bronson, a former getaway driver currently hiding out with a new, oblivious girlfriend, conflict resolution specialist Annie (Bell), while under the watch of a witness protection agent (Arnold) who gets into the type of car trouble that necessitates unloading a clip from his Glock near a couple of kids playing in the front yard and through the window of their house where their mother watches over them. When Bronson's girlfriend's ex-boyfriend (Smallville's Michael Rosenbaum) discovers Bronson's true identity as bank thief Yul Perkins, he tips off the angry criminals, led by a dreadlocked Bradley Cooper, that this mysterious new boyfriend ratted out years ago, thus kicking off a wacky road trip involving some kind of Middle Eastern scheme.

That sounds just shitty, doesn't it? Well, that's the plot in a nutshell. Sorry, but that's literally what happens in this movie. But if something like the aforementioned The Chase or Excess Baggage is, indeed, what you're looking for – and admit it, when you're sick in bed on a rainy Wednesday, you're looking for them – then you know the actual breakdown of events is of very little use. What these movies require is against-all-odds chemistry, and Shepard and Bell have that in spades.

The film starts sweetly enough, on a close-up of the pair in bed exchanging sweet nothings with just a hint of insult in the way that only new lovers can pull off. Later, when he matter-of-factly directs her to strap herself into his tricked-out muscle car so they can outrun someone, her expression hardly changes, not because the performance is wooden but because she trusts him in a way that requires some blind faith. Hell, even when she catches up to his true identity and backstory, it's the lying she has trouble with more than his actions. By the end, they're in a dune buggy planted on the walkway of a college campus, Shepard sweetly whispering to her bedraggled face that he'll never say "faggot" again. Ah, love.

If that doesn't sway you, then you didn't grow up with the movies I did, and that's OK. You're really not missing much. But if any of this makes you grin even a little, then you're probably around my age, and you should rent this next time you're under the weather.