A boring cult, two bumbling journalists and the Cranberries make for a dull, incomplete narrative exercise in 'Sound of My Voice' 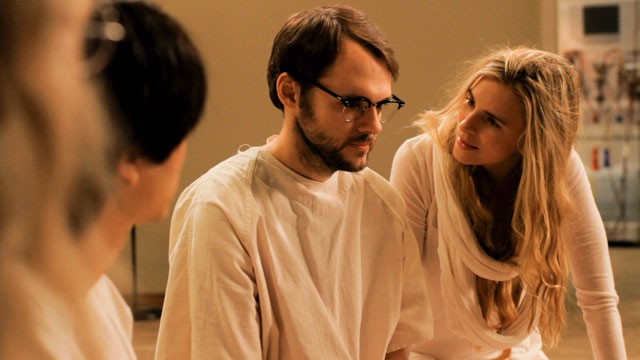 Sound of my Voice

Of the many great things going for actress-writer-producer-It Girl Brit Marling is how well she knows herself. Considering the general public knew nothing about her before the premiere of two films she co-wrote and starred in at last year's Sundance Film Festival, Marling's utter self-awareness may also prove to be her salvation.

Those two films – last year's stellar Another Earth and this month's less-than-stellar Sound of My Voice – heralded the arrival of a captivating screen presence in Marling, a lean, long blonde whose dark eyebrows help shade eyes that sparkle with wit and possibility from the golden glow of her hair. She's lithe, grounded and usually coiled, like a messenger hare for the gods. It's a look that suggests the potential for either fight or flight, both of which her character in Voice, a supposed time-traveling guru named Maggie, surely employs from time to time. No matter the film around her, Marling holds the camera's (and viewer's) attention as long as she wants it. If only she could settle long enough to remember to tell a story.

Sound of My Voice is a sketch, an inkling of an exploration of cults of personalities as seen through the eyes of two documentarian skeptics played with miscalculated casualness by Christopher Denham and Nicole Vicius as Peter and Lorna, a maddeningly pretentious couple who pose as true believers to expose Maggie's lies. They utilize video cameras embedded in Peter's eyeglasses and a couple of cheap spy gadgets, but their rational detachment is their secret weapon. They see themselves as journalists in search of truth, and that's where Marling and her co-writer and the film's director, fresh-outta-film-school Zal Batmanglij, make their first misstep.

As the couple gets pulled deeper into the basement-dwelling cult, they each worry that the other has been compromised – Peter through a perceived sexual attraction to Maggie, and Lorna due to Peter's weak opinion of her. (The movie tells us, via unwelcome narration, that Lorna is rock royalty who was in rehab before she could legally drive.) What doesn't worry them nearly enough, however, is the complete lack of usable footage they've captured or the fact that the cult they've zeroed in on for public shaming seems about as threatening as a Cranberries concert.

Hell, there's even a group kumbaya set to the band's 1990s single "Dreams." They must warn the others!

Then what happens? Well, the ending credits, that's what. Sound of My Voice is less than a wisp – it's incomplete. Just as events start pointing to a thriller of a third act, the 85-minute movie is over, leaving behind the faintest aroma of betrayal. By the time you leave the theater, you may find your sense memory of what came before immediately dissolving.

Sound of My Voice feels like a web experiment with distribution, a charge Another Earth was also brought up on by some, though I disagree on that count. Filmed with minimal budget, its no-frills, shaky-cam charms already feel dated nearly a year and a half after Sundance, and the cult at its heart is sterile and castrated: You'll find none of the green moons of 1Q84's indoctrinated or the murderous ballerina witches of Suspiria's coven or even the woodsy dark-Americana of last year's Martha Marcy May Marlene in this screen cult, only white sheets, a dialysis machine, the Cranberries and Brit Marling. Roll credits.