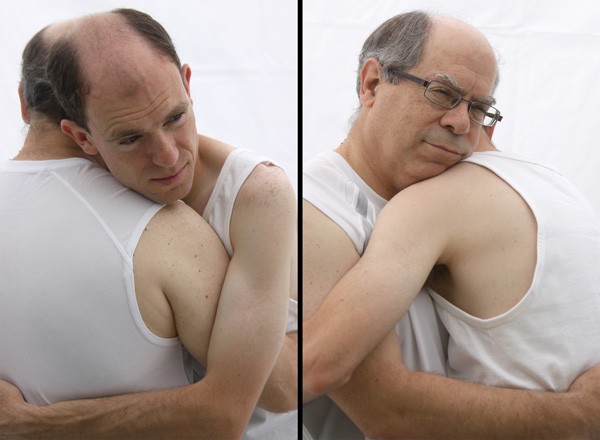 In 2005 a documentary about Warhol dealer and Pop art curator Henry Geldzahler was released, titled Who Gets to Call It Art? The film didn't have a good answer for that, really, but merely by posing the question, it lodged itself in the brains of many of its viewers (or reviewers, anyway) – who is the ultimate arbiter of whether an oversized cardboard Brillo box or a silkscreen of a movie star has the same value as a Rodin bronze or an oil by Leonardo?

Performance art drags its own baggage of questionable credibility. Just last week I was describing one of my favorite conceptual action pieces to a fellow editor – Joseph Beuys' "How to Explain Pictures to a Dead Hare" – and by the time I got to the part about how the gold leaf and honey coating Beuys' head symbolized his desire to reinvigorate human thought … well, he went from politely raised eyebrows to full-on get-the-fuck-outta-here groaning. I didn't even get to the iron slab attached to Beuys' boot (masculine strength, connection to the earth).

Marina Abramovic, the self-described "grandmother of performance art," said in a 2005 ArtInfo interview that a photo of Beuys cradling the hare "was described by some critics as a new ‘Mona Lisa' of the 20th century." At the time of that interview, Abramovic was embarking on her Seven Easy Pieces, a Guggenheim show in which she re-enacted seven famous performance pieces, including "Dead Hare." Abramovic is a particularly apt reference here, for a few reasons. First: Orlando artist Brian Feldman was one of more than a thousand museumgoers who sat across from her and gazed into her eyes during her massively hyped 72-day MOMA show, The Artist Is Present. Second: In its temporal and endurance aspects, Feldman's work is very similar to Abramovic's. Temporal art is simply art that intentionally ceases to exist; it could be a site-specific dance or a sculpture built of ice and twigs in a riverbed. Endurance art can be a bit darker (there's a stripe of vicious self-harm in the performance art repertory; e.g. Chris Burden filming himself being shot in the arm, nailed to a car, etc.) but it refers to any extreme of repetition or duration – say, for instance, jumping off a ladder every four minutes for a full day.

Feldman's projects, well-known to most Orlando cultural punters, are too numerous to examine here; indeed, their very profusion might be considered significant, a work in itself exploring compulsion. He examines and reflects back to the audience his (our) relationship to time ("Leap Year Day," in which he, yes, jumped off a ladder 366 times in 24 hours on Feb. 29, 2008), to self-image, to notions of entertainment, consumerism, religion ("Hanukkah in Little Havanaka," "ChanIKEA™," "Jai-Alai Hanukkah"), to nourishment (multiple "Brian Feldman Eats Everything Off the Menu" actions) and to politics. His most famous piece, "Brian Feldman Marries Anybody," is also the most explicitly political: In "Part 1," Feldman advertised for a stranger to marry him; in "Part 2," after a lesbian couple applied for and was denied a marriage license at the Orange County Courthouse, Feldman and local artist Hannah Miller, previously unacquainted, were wed on the spot.

So was it art or political action – or just a gag? What about "Leap Year Day" or the annual "Pillowlando" mass pillow fight? The challenge for any performance artist who doesn't choose to coat his head with honey or film himself being shot is that a lot of people aren't going to take you seriously, and a lot of people aren't going to see the difference between your project and that cute dance troupe at the Gap. (The proximity of "24 Hour Embrace" to May 28's Big Big Big Hug, a bright and breezy celebration of the international Free Hugs movement organized by local teahouse owner/community visionary Julie Norris, is a perfect expression of the contrast between art and, let's say, social activity.) Feldman's body of work is infused with a light-heartedness and humor that makes it easy to conflate with events like these.

The aura of Abramovic hangs over "24 Hour Embrace" in yet another way: Like her 2005 re-creation of those seven not-even-slightly-easy pieces, "24 Hour Embrace" is a cover. New Zealand artist Young Sun Han (who made it and granted Feldman the right to re-create it) has performed it twice now, both times exploring with strangers ethnic identity and the push-pull of intimacy, the longing to connect with others balanced against the repulsion of breached boundaries. "After reading an article in Juxtapoz about Young Sun Han's performance, where his co-embracee (?) described the piece as ‘open[ing] up an internal dialogue about father-son relationships,' it dawned on me that the fact he had selected someone other than his actual father might lead me to proceed with a re-performance featuring that very significant change," writes Feldman in an email. "I consider this to be the toughest thing I've ever done."

Feldman's "Embrace" will take place in a boxing ring, a choice I have to think expresses still more about the father-son relationship. After the first 12 hours, pairs of viewers are welcome to enter the ring for their own embraces. I hope this echoes Abramovic's staring-contest viewer/collaborators, rather than becoming a quirky Dad's Day diversion to be uploaded to Facebook, but my desires have less than nothing to do with how it will play out. In the end, Brian and Edward Feldman will stand in each other's arms, dozing, swaying, sweating, aching (and, let's hope, laughing) together for a full Father's Day.

So back to that original question: Who gets to call it art, anyway? The answer, of course, is the viewer. Abramovic's gaze only worked as art because hordes of people were willing to consider it that. Here in Orlando, Feldman's goofier projects draw hordes of curious onlookers, but not all of them would even agree that what he does is art. Feldman's work does, ultimately, hold up a magnifying glass to that line we all draw between the public and the personal (and what is art, and what isn't). His interpretation of what makes a performance "art" works for me.