Barbecue joint sends out smoke signals to the meat-hungry masses 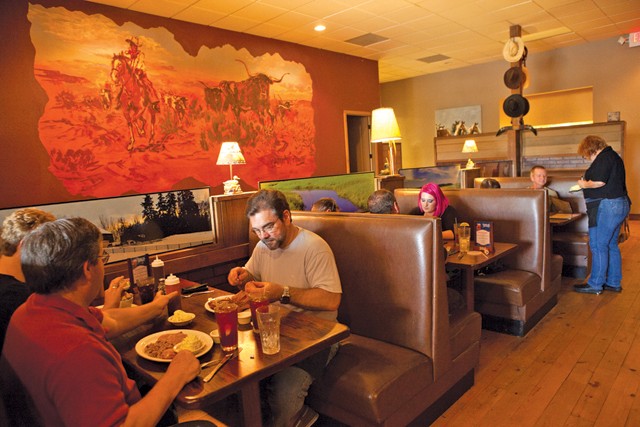 Where else but in Florida – or possibly Georgia, Alabama, Louisiana or Mississippi – would you find a barbecue joint and a catfish shack flanking a Winn-Dixie? Such culinary swagger may not score points for cities like Jacksonville, Tallahassee, Tampa or Orlando in an index of the world's most livable cities, but it's these peculiarities that make people in other cities envy us. OK, envy may be too strong a word – let's say fancy. This is what they fancy about us.

The gastronomic triumvirate sitting on the southwest corner of Curry Ford Road and Crystal Lake Drive won't be around for long, though – that's because the Catfish Joint is in the process of merging with this week's spotlight restaurant, Holy Smoke BBQ. The owners are one and the same, so that'll make the amalgamation easy, but we weren't privy to this knowledge when we first entered Holy Smoke. In fact, we were somewhat confused by seeing Catfish Joint menus sitting on a rack near the front door, a list of steaks scrawled on a menu board, and no one to greet or seat us on entering. After a couple of minutes, someone came around and led us through the impressive dining space to our wood-tabled, leather-seated booth, where we were left to behold a vista of Old West furnishings and paraphernalia: saddle racks, cowboy hats, a saloon awning and, the eye-catching showpiece, a large faux-hide mural of a cattle drive.

Clearly a fair bit of thought was put into the decor, and we returned the favor in putting a fair bit of thought into our menu selections. While the chicken pot pie ($7.99) and 18-ounce bone-in rib-eye beckoned ($25.99), we opted to keep our focus on the smoked meats – and, for the most part, they were right on 'cue.

The ambrosial wafts characteristic of barbecue joints were absent, but we were assured our meats were dry-rubbed and slow-cooked in an old hickory smoker. Proof positive: the superbly pliant hunks in the beef brisket platter ($11.99). (True, they lacked the lush succulence of the same cut at 4Rivers Smokehouse, but it's generally accepted that 4R's brisket is in a class of its own.) Sides of crunchy fried okra and chunky whipped potatoes and gravy were perfectly rendered. For an extra $3.49, we added some of the juiciest smoked turkey we've ever sampled to the mix.

Tender strands of moist pulled pork ($9.99) elicited grunts of approval, but just as grunt-worthy were soupy collard greens and the sweet baked potato. We added a couple of baby back ribs ($2.49) to the platter – not bad, but not especially noteworthy, either. Sweet, spicy and vinegar-based sauces all received their due dabs, though we were partial to the spicy.

We had especially looked forward to sampling the cupcake chicken ($9.99) – marinated for 24 hours, then slow-cooked for two hours in a cupcake pan – but the kitchen was out. So we took a look at the Catfish Joint menu and got – what else? – the catfish basket ($7.49).

Plucking the fish's light cornmeal breading yielded a flavorful twang, but we were a little surprised to find that the sweetest sounds of the evening came from silently devouring the homemade banana pudding ($3.99) and coconut supreme cake ($2.25).