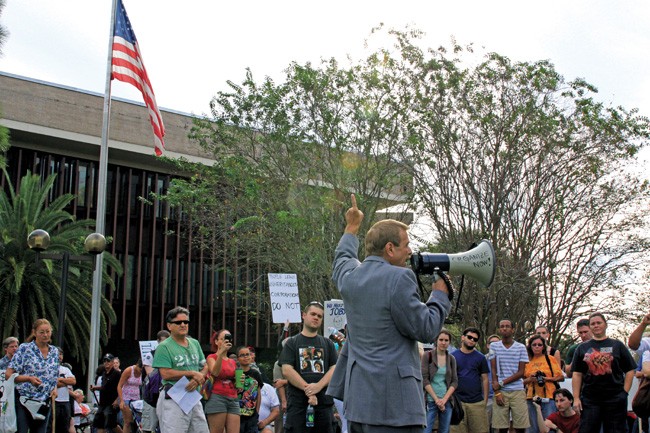 Bruce Shawen has been homeless for the past three years. His beat-up wallet holds little more than a Florida state and voter ID card. He’s lived in the City Beautiful since 2005, he says. He used to live in a bungalow near Fern Creek Avenue and Colonial Drive, which he moved out of in 2008 when he was laid off from his job as a plumber and couldn’t afford the rent. More recently, he’s stayed in a tent in the woods or the comparative luxury of a city homeless shelter.

In July 2011, Shawen filed to run for City Council. He wanted to challenge incumbent Commissioner Patty Sheehan for her District 4 seat, but on Feb. 10, he sent a disappointing email message to his supporters.

“I was unable to qualify as a candidate for the Orlando City Commissioner ballot due to the fact that I do not rent, lease or own property in the city of Orlando and am not therefore considered to be a resident or citizen thereof. (I believe Orwell called it being an ‘un-person’),” he wrote. “Despite my best efforts in producing letters from several organizations (on official letterhead) indicating that I have been known to be a resident of Orlando for many years, and despite having been a registered voter in Orlando since 2008, apparently having no rental agreement, lease or deed to property has disqualified me from the running.”

With that, Shawen pulled out of the race.

Shawen says the Salvation Army gave him proof-of-residency documentation when he needed it to obtain his state and voter ID cards, but when he asked the organization for documentation that would qualify him for the election, he found himself on a political merry-go-round.

“They passed me off from administrator to administrator for most of the time,” he says. “Then I was told by an administrator that they would not be able to give me the documentation, because they don’t want to be involved in the political arena.”

Vicki Hastings, public relations coordinator for the Salvation Army, says that due to the Health Insurance Portability and Accountability Act of 1996, which requires agencies that provide health-related services to maintain client privacy, she cannot discuss Shawen’s situation.

“However, this fact is not really relevant, since the Salvation Army can neither confirm nor deny that Mr. Shawen was ever here,” she says.

After failing to get help from the Salvation Army, Shawen requested letters from other homeless-advocacy organizations and individuals who could verify that he lived in Orlando. He also had to raise enough money to pay the filing fees required to run for office. First, he tried to get a waiver by filing affidavits, which would require him to obtain 641 signatures of registered voters in the city. He only managed to gather about 70 signatures, so he decided to find a way to pay the $1,438.34 in filing fees. He earned the money quickly, he says, by responding to advertisements in the back of Orlando Weekly.

“I was a human guinea pig,” he says. “I found an ad in the back of the Weekly and signed up for drug testing for Hepatitis C. I collected $1,100, and as soon as I could, I put it toward my campaign.”

In November 2011, Shawen brought his money and what documents he could gather to City Clerk Alana Brenner.

“I received letters from homeless organizations, from the Homeless Services Network to legal advocacy groups, stating that I was a resident,” Shawen says. “When I shared these documents, I was told they weren’t good enough.”

Brenner says that to qualify to run for office, “one must be a resident for one year and a registered voter.” According to city code, “satisfactory proof” of residency would include a lease or mortgage document, utility bills that showed enough utility usage to prove residency and a Florida driver’s license registration. The code also says that candidates can submit “any other documentation that shows their intention to be a bona fide resident at their qualifying address.”

“He was a registered voter, but he couldn’t get the proper documentation for residency,” Brenner says. He could have tried to obtain further documentation, she adds, but he pulled out of the race.

“He was the best candidate that ever came in,” she says. “He knew all the codes. He came in and told me he wasn’t going to run. His situation is unique.”

One of the letters Shawen brought to support his residency claim was from Jacqueline Dowd, a former attorney for Food Not Bombs, which organizes food sharings for the homeless in downtown Orlando. Dowd now works for the Homeless Services Network and IDignity, which helps provide identification for the poor and homeless. She says she has known Shawen for the past five years, and he has worked with the Faces of Homelessness Speakers’ Bureau, a program that helps educate the public about homelessness issues.

Dowd says she is considering representing Shawen in a suit against the city through the nonprofit social-justice law firm Legal Advocacy at Work.

“We need to clarify the definition of bona fide residency,” she says. “He laid his bed down in the streets of Orlando. Just because he doesn’t have a roof over his head, does that mean he is not a person accepted in society?”

She says the issue goes deeper than the simple matter of Shawen’s paperwork.

“It is reminiscent of the colonial days, where you had to own property to vote,” Dowd says. “This issue of residency is important because homeless people are a part of our community, they should have a voice.”

If Shawen had been elected, he would certainly have been that voice. He says that he would have pushed to have the city’s controversial feeding ordinance, which makes it illegal to serve food to groups of people within a certain radius of City Hall, to a citywide vote. The ordinance has been used to prevent Food Not Bombs from holding its food sharings at Lake Eola Park. “Let the people decide on whether or not that should be allowed,” Shawen says.

He also says he wanted to push the city to examine violence against the homeless, create a tax initiative for small businesses to hire the homeless and create an official position in city government to protect the homeless.

With Shawen out of the race, that homelessness-advocacy position is being considered by another District 4 candidate, Aretha Olivarez.

“I think that would be a great idea to have a homeless consultant, and who better to hold this position [than Shawen],” Olivarez says. “I would love to work with Bruce on something like that.”

Olivarez, who was active in the Navy for nearly 10 years and now serves in the reserves, is a consultant who helps nonprofit organizations.

“I am for the underdogs, and I have a special place in my heart for the homeless,” she says. “It’s ridiculous with what is going on with the homeless in Orlando. We need to see Commissioner Patty Sheehan out.”

When asked about Shawen and Olivarez, William Stevens, Sheehan’s aide, says Sheehan “does not have any comments” because she didn’t want to speak negatively of her challengers.

“If you’d like to ask about her qualifications or reasons she is running, then she’d be happy to answer,” he says.

As for Shawen, for now he’ll concentrate on looking for work: restaurant gigs, pruning trees, hiking up and down Orange Blossom Trail to Semoran Boulevard trying to find jobs. He says he has a bachelor’s degree from Frostburg State University in Maryland, so he may try for some substitute teaching.

“Right now, I am just concentrating on getting off these damn streets,” he says.