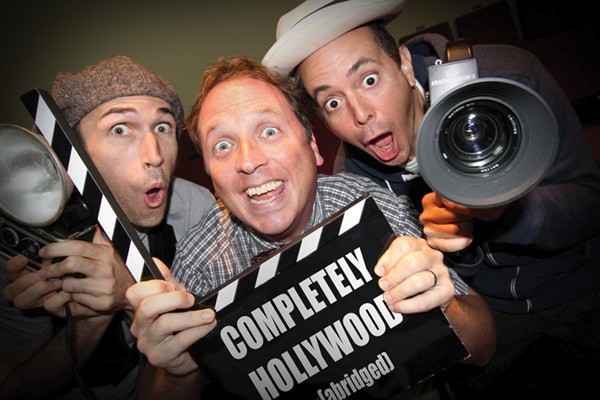 In a scene from Completely Hollywood (Abridged), the spoof of the American film industry now playing at the Winter Park Playhouse, stage actor Matt Horohoe is impersonating film actor Joe Pesci. Horohoe’s Pesci is trying to explain to fellow performer Joshua Siniscalco just why Rocky IV is the best movie ever made. His twisted logic so impresses Siniscalco that he then asks Pesci to rate Rocky V. “It’s a sequel,” he intones. “It’s crap!” Bada-bing!

While the Tinseltown sendup, written by Reed Martin and Austin Tichenor and directed here by J. Michael Roddy, is certainly not “crap,” one can “get the pitchur” from Pesci. This two-act comedy from the California-based Reduced Shakespeare Company, the team that created The Complete Works of William Shakespeare (Abridged), The Complete History of America (Abridged)and other similar works, does have the cynical feel of a Hollywood sequel – a work created to ride the lucrative coattails of the previous productions, but lacking the creative spark that lit up the originals.

In fact, most of Completely Hollywood is merely, and more often, exactly that – a game of “get the pitchur,” in which the titles of dozens of films are mentioned, juxtaposed, interpolated and otherwise mixed together in a hash of skits, one-liners, double entendres and blackouts. And while some of the mashups are extremely clever – Snow White and the Seven Samurai, Taxi Driving Miss Daisy, My Left Footloose, Gandhi With the Wind – (you get the idea) it’s not really all that funny. If you don’t have an encyclopedic knowledge of current and recent Hollywood filmography, you might miss many of the jokes.

In the first act, Horohoe, Siniscalco and Mark Baratelli – playing the professional, the egotist and the politically correct writer, respectively – tutor the audience on the 12 rules of Hollywood filmmaking. For example: Every new movie is just a combination of two old movies; action sells, so don’t rely on language; never let facts get in the way of a good movie; and so on. In Act Two, the trio performs an amalgamation of their three “scripts” in what turns out to be a bizarre mystery/science fiction/Western sort of morality tale.

There are some spiffy sight gags, a bit of audience participation (although not as much as in the original Edinburgh Fringe Festival mounting of the show in 2005) and some local references that ingratiate the performers with the crowd. But there is a vacuum at the core of the play: Self-referential wit doth not a comedy make, and “formulas for success” often wear themselves out. All three performers are talented and many of their impersonations are spot-on. Horohoe and Siniscalco were quite animated, but Baratelli, who gave a much fuller comedic performance in the Playhouse’s recent production of Five Course Love, seemed laconic and uninspired in this outing. A lot of the time, he appeared to be “going through the motions,” much like the script itself.