HARBINGER After adding another guitarist and shedding the "Trio" part of their moniker last year, Orlando's Harbinger have hit their stride on their latest, the three-song EP Millhopper. Consisting of bassist Christopher A. Wren, drumming powerhouse Daniel P.M. Fox and Darin E. Hughes and Charles E. Amyx III on guitars, Harbinger plumbs the instrumental depths that post-rockers Tortoise and Mercury Program have previously visited – the somber guitar interplay, the terraced dynamics, the polyrhythmic release. But whereas bands of their ilk get lost in studio-created atmospherics and heady interludes, Harbinger heads straight for the melody and never lets up. Their compositions can sprawl out past the eight-minute mark, but never does the band feel like it's filling up space or wasting time in the development/denouement cycle. This Thursday performance is the third of their Musicians-in-Residence stint at Peacock. See them before a recording budget affords them Pro Tools, drum machines, keyboards and enough tape to create an hour-long ode to the theremin. (10 p.m. at The Peacock Room, 407-228-0048; free)

HOT SNAKES Those who lamented the dissolution of post-core/math rock pioneers Drive Like Jehu are already salivating at the Orlando debut of San Diego's Hot Snakes. The band reunites Jehu founders John Reis and Rick Froberg, who formed Hot Snakes after Reis was on a brief hiatus from Rocket from the Crypt. And – surprise – the band pretty much sounds how you think it would: DLJ's angular angst driven through the slickness of RFTC's Circa: Now!. 2004's Audit in Progress is the band's third release, but this is their first full-scale tour together. And if the previous bands are even one-tenth of an indicator of what's in store for the live show, expect a sweaty, balls-to-the-wall free-for-all onstage. (with The Ponys; 8 p.m. at The Social, 407-246-1419; $13, $15) 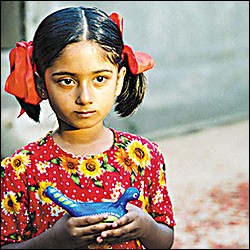 GLOBAL PEACE FILM FESTIVAL A cursory reading of recent shifts in America's political geography might indicate that the principles of international cooperation and nonviolent conflict resolution are as dead as the dodo. Yet there's still that pesky 48 percent to account for – a forward-thinking demographic that'll be the key audience-recruiting pool for the second annual Global Peace Festival as it uses the wonders of the moving image to further progressive ideals. Last year's inaugural festival suffered from an appearance of 11th-hour organization and a host site (Universal Cineplex 20) that's hardly the hub of liberal pedagogy. The follow-up, though, enjoys the benefit of owning the program schedule for six days at a far more appropriate venue, downtown's D.MAC. It's easy to envision patrons recruited by the media center's October Take Back Democracy Film Festival responding to the GPFF's lineup of features, shorts programs and educational discussions, which will examine the subject of peace from a panoply of angles. With specific topics ranging from Israeli/Palestinian reconciliation to the lifesaving efforts of firefighters, the festival will explore what it means to take peacemaking as a working philosophy. One narrative feature of particular interest is Zaman, the Man From the Reeds, a peasant story that's said to be the first feature shot in Iraq in over 10 years. With a track record like that, no one's going to be dubbing the place Hollywood Middle East, though a setback the film suffered helps explain the dearth of location shoots: Five reels of the picture were confiscated by Saddam Hussein's government before it fell and are now lost forever, proving that the cause of preaching peace on the screen has far worse enemies than Fotomat. (begins 7 p.m. at D.MAC, 407-992-1200; $7 per screening, panels $5-$7; for full schedule, visit www.peacefilmfest.org or www.dmacorlando.com)

SALOME Robert Swedberg's leadership of the Orlando Opera has been marked by a series of very clever chances taken, and Swedberg's steamy production of Salome is again pushing the buttons of our always eager base instincts. There's no need for hyperbole here: Salome is Richard Strauss' take on Oscar Wilde's version of a randy Bible story about King Herod and his daughter. Daughter Salome gets the hots for John the Baptist after the king locks him up and, after being scorned by the preacher, ends up asking for his head on a plate, a wish which she is granted only after perfoming her famously foxy dance. Singing in German (with English supertitles), significant talents Deidra Palmour and Greer Grimsley, as seducer Salome and her seducee John, respectively, will be heightened by some sort of surprise nudity (!!). If that's not enough, Swedberg has added some game to his play: The exotic "Dance of the Seven Veils" surrounds Salome with six Magic Dancers (!!!) sporting more than team spirit and less than their street clothes. If all this blue-state vice can't put red-state butts in seats, we don't know what will. (For a coincidental recap, on closing night, Nov. 23, the Sunshine Network airs Making of the Magic Dancers 2004, the documentary that follows the women from boot camp to center court to a bathing suit calendar photo shoot in Las Vegas.) (8 p.m. at Carr Performing Arts Centre; 407-426-1700; $20-$70; repeat performances 2 p.m. Sunday and 7:30 p.m. Tuesday)

GARAGE SALE AT MENNELLO MUSEUM "We've got a huge storage problem," says Frank Holt of the city's folk art museum (and his home away from home). "So this is one way to deal with it." Indeed, sticking a price tag on everything that's got to go and inviting the public to do the scouring seems like a good way to clean house: Holt and crew tried this approach a few years ago and found it most effective. (It's hard to keep the people active in Orlando's art scene, but give them a calculable bargain and they're all about it.) Offered in the eclectic mix that'll fill the front porch are some office furniture and cubicles, as well as original art, marked-down items from the gift store (plan for next year's Halloween now), books and sundry other scores. Says Holt, "There's nothing too weird, but there are some possible gift items." And do make time to browse around inside the museum itself, where what were once everyday Navajo necessities – saddle blankets – are now exalted as high art. (10 a.m.-4 p.m. at Mennello Museum of American Folk Art, 407-246-4278; free)

JIMMY BUFFETT This is a benefit for hurricane victims. "Margaritaville." "Cheeseburger in Paradise." Grown-ups puking in the parking lot. Republicans engaging in appallingly pathetic "decadence." All we can ask is this: Haven't we suffered enough? (8 p.m. at TD Waterhouse Centre, 407-849-2020; $25-$75)

THE HIVES We hate ourselves for loving them, but love them we do. Even though they drip records out slowly (which forces them to undergo ridiculously exploitative and redundant repackagings) and their flavor was so last month, we know these Swedish boys can't help the fact that the sound they've been bashing out for 10 years just happened to be stilig for a little while. So it's OK for them to be cashing in. Garage rock is forever, right? Right. Still, seeing them on morning talk shows is disorienting, but we'll blame ourselves for that. (We're not morning people, you see.) They dress so fine and rock with such calculated abandon, they will forever have a spot in our cold, cold hearts. (with The Deadly Snakes, The Rogers Sisters; 8 p.m. at House of Blues, 407-934-2583; $15)