At Drac's place, not all messages reach the front desk 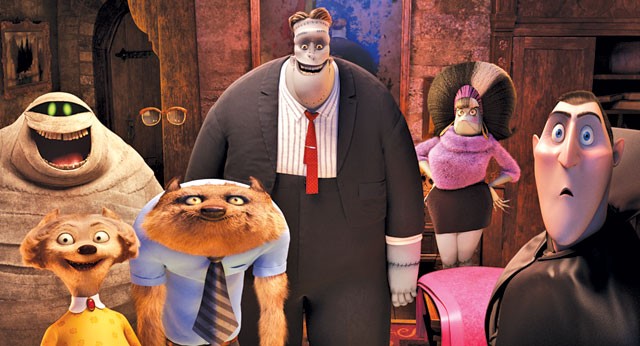 An animated monster rally can provide a fine occasion for a sermon about tolerance. Witness ParaNorman, which depicts the evils of prejudice with enough emotional realism to genuinely upset some children (which is exactly why they should see it). Hotel Transylvania flirts with that kind of social work, but ends up a mostly bland and unmemorable babysitter for kids too young to go trick-or-treating.

Hidden in the wilds of Transylvania is a castle hostelry that serves as a cherished getaway for monsters seeking a vacation from the persecution of humans. The parallels to a Catskills resort are obvious the minute proprietor Count Dracula (Adam Sandler) opens his mouth: In both dialect and vernacular, he's firmly in the Grandpa Al Lewis tradition of the vampire as crusty old Jew. Among the guests enjoying the annual schedule of bingo and charades are the Bride of Frankenstein (Fran Drescher), portrayed as a nagging fishwife straight out of a Henny Youngman joke, and a similarly kvetching, multiheaded creature with the surname Hydraberg. (Seriously.)

Into this pastoral environment stumbles … sexpot dance teacher Patrick Swayze? No, an American teen (Andy Samberg) on a backpacking tour. One look at Dracula's daughter (Selena Gomez) is all it takes for young love to blossom between them – and for Drac to panic that he may no longer be able to protect both his offspring and his clientele from the outside world he so fears.

The put-upon, see, have become the prejudiced. Yet rather than follow this soul-searching conceit to a satisfying conclusion, the movie spends a good chunk of its running time juxtaposing vignettes of forbidden courtship against sight gags involving the Wolfman (Steve Buscemi), the Invisible Man (David Spade) and the rest of the classic Universal crew. That entire setup is lifted straight from the 1967 Rankin-Bass feature Mad Monster Party, though I doubt Hotel Transylvania will be looked upon 45 years from now with the same nostalgia. The movie just isn't cute or clever enough, too rarely rising above the most obvious visual puns. The wit of co-writer Robert Smigel is particularly wasted; instead, there are flatulence and nose-picking bits that ring pure Sandler. And while the look of the film (directed by Genndy Tartakovsky of TV's Samurai Jack and Star Wars: The Clone Wars) is charming enough in its own right, it still can't compete with the character designs Mad magazine artist Jack Davis provided for MMP.

But where the movie really falls down is in the characterization of Johnny the backpacker. He's supposed to be endearing enough to melt an old vampire's heart, but he's simply a pain in the neck. Samberg – whose abrupt transition from Lonely Island hipster to Sandler butt-boy may constitute the swiftest career flameout in history – milks every last clichéd dude-ism to its utmost obnoxiousness. He's asking us to be beguiled by one of the jam-rock doofuses he used to pillory mercilessly on Saturday Night Live. Instead of hoping that Johnny would find romantic bliss with Gomez's Mavis Dracula, I found myself praying that the Wolfman would bite his head off so we could all go back to having a good time. I guess I'm just human intolerant.