Photo by Andy Paulissen Author Stephanie Daniels had to muster the courage to let her hair go free form. 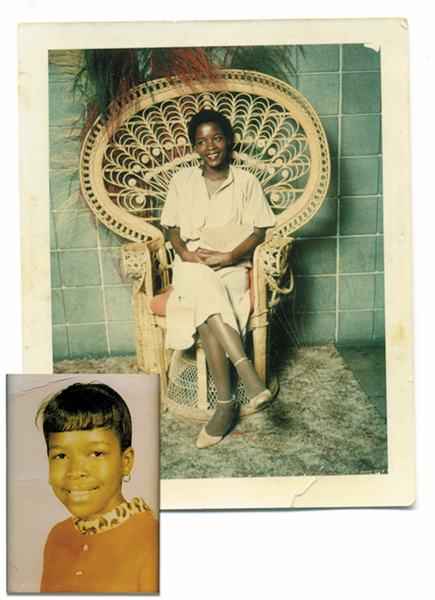 It was her form of liberation. Growing up, my grandmother would keep Mom's hair pressed. Every couple of weeks, my mother would hesitantly walk into the loud bustle of the beauty salon: chairs filled with women talking about what they'd done that week, what was the new style, about "Jack" and his slick perm. Despite all of that, her eyes were dead-set on her seat amongst it all. She didn't want to battle the familiar enemy of many black women: the hot comb.

Many black women can attest to their love-hate relationship with the hot comb. It was what you endured to be "beautiful," and my mother wasn't immune. She sat still as the comb heated up, staring in anticipation as her beautician pulled it from the stove, the smoke that wafted from it validating her fears. As the comb got closer, the fear of getting burned washed over her, forcing her into the darkness behind her eyelids. It wasn't pleasant. But society, family and that voice inside insisted your hair should look neat, neat was straight and straight hair meant an appointment with a hot comb.

But even after she resisted the hot comb, even as she got her hair cut so very short, my mother still signed on to the opinion that your hair should look neat. She wasn't alone in that. Even in the era of the afro, there was always this underlying distaste for styles that looked "unkempt." You can see it if you look back on pictures of how afros were styled. They were trimmed to the "T" and picked to perfection, not a hair out of place. This sort of unspoken rule of neatness often acted, and still acts, as a catalyst in the avoidance of hairstyles that show the true natural form of black hair. And this influenced my personal hair journey.

For years, I went to the hair salon and stared at the hot comb, just as my mother had before me. I straightened my hair, permed it, got sew-ins, dyed it. I overworked my hair and succumbed to what society and even my familial history told me was right.

But something in me resisted. I began to read books about my history, and watched as many interviews and commentaries as I could on what it meant to be black. I viewed hair tutorial after hair tutorial, looking up natural concoctions that I could make and use in my hair: coconut oil, grapeseed oil, flax seeds.

The more I dove into my culture, the more I wanted to be free within it. I saw photos of my ancestors wearing their hair in its natural state, and I learned the purpose of it. So, in response, I chose free-form locs as the truest expression of myself.

For Africans, I learned hair had always been a part of our spirituality, and always served a purpose. Often, it was looked upon as a direct line to our ancestors and the Most High. Our hair acts as an antenna that taps into a higher vibration, an idea inspired by how our follicles grow upward, towards the creator.

But through the transatlantic slave trade and colonization, the very fabric of our beliefs and what our ancestors held sacred were stripped away. Historically Africans were made to cut their hair, and were separated from the beliefs and spiritual systems that had been at the center of their communities. Their African features were looked down on, and Eurocentric features were prized. More than a century after slavery, the perm was introduced. Women and men moved away from natural hair, and placed harsh chemicals that often singed their hair to obtain the beauty standard.

We see now the residual effects in research that links hair chemicals used by black women to fibroids. Black women in the U.S. have a rate of these uterine tumors that's two to three times higher than white ones. For a 2012 study published in the American Journal of Epidemiology, the authors interviewed more than 23,000 pre-menopausal black women from 1997 to 2009 and found higher fibroid rates among women who'd used relaxers in their hair. Relaxers often contain lye (sodium hydroxide), which can cause burns and lesions on the scalp. The authors linked these burns to the occurrences of fibroids.

I've long been intrigued by the link between our ancestors' first experiences with European culture and the imprints left on our society in the present day. We live in a society of social media, where influence can be magnified as it confronts us in image after image, on screen after screen.

As a black woman, it is a constant struggle dealing with beauty. We go to get makeup and can't find our shade; access to natural hair-care products that work with our hair is limited, often manufactured by individuals who don't look like us; and of course, natural hair is deemed "unprofessional." Your African hair is called "nappy" and your body "fat"; when you turn to social media, you get choked out by the cultural appropriation.

Even in 2018, we are still trying to find our place in society without having to compromise what we look like. But it has always been a struggle for us, especially when it comes to how we perceive ourselves, and how black men perceive us.