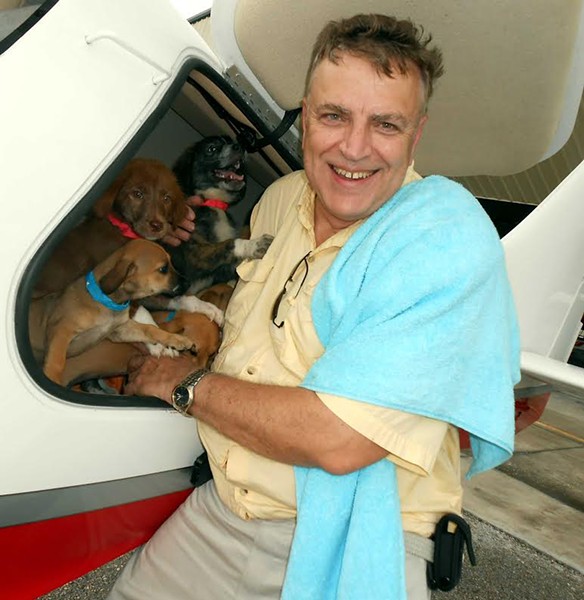 Five thousand feet up, pilots are flying some very important cargo across the country. It's not people or packages these men and women have loaded into the back of their planes: It's puppies – squirmy, soft and sometimes sad homeless animals who need a new leash on life.

In recent years, rescue-pilot programs have taken off in the South and Northeast. Pilots, almost all of them volunteers who give their time and money to the cause on the weekends, shepherd homeless animals from high-kill shelters in states where adoption rates are usually low, like Alabama and South Carolina, and fly them miles away to animal rescues in the northeast or Central Florida. The animals, many of them young dogs, are adopted or fostered in places where more people are looking to find a furry friend to take home.

Given their wings and the selfless mission to save lives, it might seem apt to compare these pilots to angels. But Michael Young, an Orlando rescue pilot who's been transporting dogs via plane for the past seven years, says it's all in a day's work.

"It's a chain of people working together and us pilots are just one cog in the big wheel," Young says. "We're not the angels. We're just the bus drivers. The angels are the people who pull the dogs and the people who foster the dogs and put them up for adoption."

Young has transported almost 1,000 dogs as a volunteer, flying the animals from Alabama to rescues around Florida. It's a labor of love – one that doesn't come cheap.

Pilots usually end up spending $10,000 to $12,000 a year maintaining their planes, and Young says it costs around a dollar a mile to fly due to fuel costs, although many of the expenses are tax-deductible because of the charitable cause. 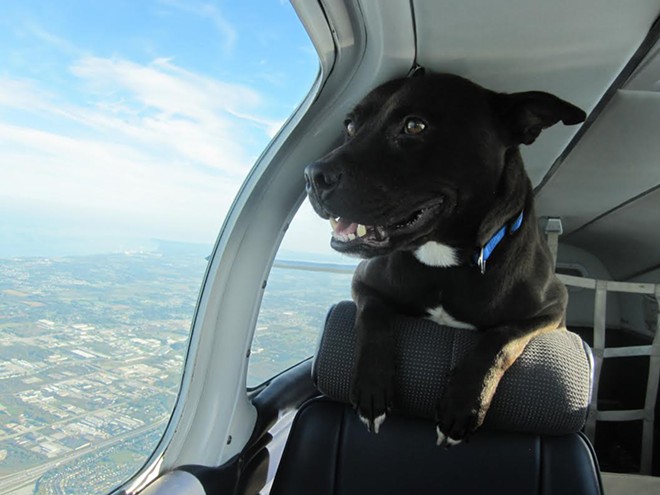 Despite the cost, Young says it's worth it to save the lives of animals who might otherwise not have a chance. Young says he even adopted two of the dogs he's flown.

It's this type of dedication that Kate Quinn, executive director of Pilots N Paws, a South Carolina-based organization that connects pilots with shelters looking for volunteers to transport animals, says she sees in all her pilots.

"These people are huge animal lovers. They're so concerned with the animals and making sure they're comfortable," Quinn says. "We've learned that pilots are looking for a meaning to their flights. They're looking for a reason to fly."

Saving the lives of 4 to 6 million animals that would otherwise be euthanized every year sounds like a pretty good reason. Quinn says that without the planes swooping in to pick up the animals at the 11th hour, many of them would have to be put down.

There's also an advantage to using planes as opposed to ground transportation to move the animals. When there are no pilots to help, dogs must be transported in car relays, constantly switching drivers and traveling in crates. On the planes, many pilots allow the dogs to roam freely. The trip by plane is much more consistent and comfortable for them.

"The animals do really well," Quinn says. "People are surprised to hear how well they do in the plane. The sound of the engine seems to lull them to sleep."

While the plane experience is better for the animals, the trips do present their own unique challenges, especially in Florida.

"Flying in thunderstorms during the summer here is a challenge. It's like Florida has the measles if you look at the weather radar, with all the red pimples," Young says. "But I've learned to do it. The best analogy is like a soccer field full of snapping turtles. ... We go fast. We go around it. We don't go through them."

That's not the only obstacle to getting the job done. Quinn points out that it takes a lot of hours and a lot of people working together just to save one dog.

"The idea came to me because it was so difficult to keep track of which transport requests I was involved with, which animals were on which transport, and who to contact," he says. "I kept thinking there has to be a better way to do this, and so I decided to create it."

Even though he also works during the week as an IT project manager, Roy says that there is a major reason he and the other pilots give up their free time for this cause – to spread the puppy love.

"The pilots and ground volunteers donate their time, vehicles and gas because they know that these animals deserve a chance at a better life," he says. "They don't ask for anything in return."

Young and Roy agree that the joy in the job comes from the love they receive from the animals they've saved. The thanks they get is spoken in the universal language of a wagging tail or a slobbery grin.

"Many people may think I'm crazy, but these animals in a rescue-relay transport know you are saving them and bringing them to a better place," Roy says. "You can see the look of relief in their eyes, and see the smiles on their face when they meet you."