After all the insanity this year brought (and, let's face it, 2017 ain't gonna answer anyone's prayers either), let's just forget the sequins and black ties, the fireworks and fanciness. Put on your comfiest jeans and your coziest flannel and head out back.

Instead of shelling out megabucks for champagne toasts or paying cover charges just to dodge a bunch of amateurs' vomit puddles, stay home. Eat good food around a backyard bonfire with your buds. Cook over an open fire. Make a big batch of cocktails to share rather than popping a hundred bottles. Simplify. (If you're still looking for a New Year's resolution, that's a good one.)

To simplify things even further, here's a menu you can follow. Don't even think about weenies and marshmallows – we're all adults here, and you'll want something full of flavor and sophistication, even if you're just sitting on tailgate chairs and sipping from Solos.

Follow this plan and you'll eat fabulously fireside on Dec. 31 without having a dish to wash on Jan. 1. That's ringing in 2017 in a blaze of glory, if you ask us.

Make an ice raft by placing fresh cranberries and four cups of hot water in a bundt pan, then leaving it in the freezer until set. Make the punch by mixing three and a half cups of cranberry juice, a cup of bourbon, half a cup of lime juice, a quarter-cup of simple syrup, an ounce of cinnamon-flavored whisky (like Fireball) and four bottles of lager beer. Use a little hot water to loosen the raft from the bundt pan and float it in the punch bowl before serving.

If you can't get to the Big Easy to partake of these broiled bivalves, doing it yourself is the next best thing. Get a big enough square of chicken wire (or a big grill grate, if you're fancy) and set it right on top of the fire until the oysters bubble. If shucking oysters isn't on your list of kitchen skills, grab a couple dozen pre-shucked from Lombardi's Seafood in Winter Park (order by 3 p.m. Dec. 30 to pick up by 3 p.m. Dec. 31).

To prepare, set the oysters on the half-shell on the grate. Sprinkle each one generously with Parmesan, minced garlic and a big dot of salted butter. Set the grate on the fire for 10 or 15 minutes, or until the oysters start to bubble and the cheese is golden-brown.

You have two ways to go here. First option: Braise a pork shoulder with a bottle of BBQ sauce in a heavy cast-iron pot or Dutch oven for two hours, then serve with potato rolls or King's Hawaiian sweet bread and pre-made coleslaw for easy pulled pork sandwiches. Or rub a pork shoulder with Mexican chilies and spices and braise it in dark beer, then pull it apart and stuff it into tortillas for tacos.

If you go the BBQ route, marinate the pork shoulder for 24 hours before cooking. Then place the pork shoulder and the marinade in a cast-iron pot with two cups of water or light lager beer. Put the cover on the pot and place the pot between the outer rim of the fire and the center. After an hour, move the pot (wear pot holders!) to the outer edge of the fire, making sure there's still coals underneath it, for two or three more hours. Remove the pot from the fire and let cool for 20 or 30 minutes. Shred the pork with a fork and layer it on fresh buns with coleslaw and bread-and-butter pickles.

For tacos, rub the pork shoulder with ancho chili powder, sugar, cumin, coriander, allspice, lime juice and salt, all to taste. Let it sit in the refrigerator for up to two days, covered. When you're ready to cook, place the pork in the cast iron skillet and pour a dark beer around it, then follow the same cooking directions as for the BBQ pork above. Serve with tortillas, pickled jalapeños, cilantro and sour cream, plus any other toppings you love. 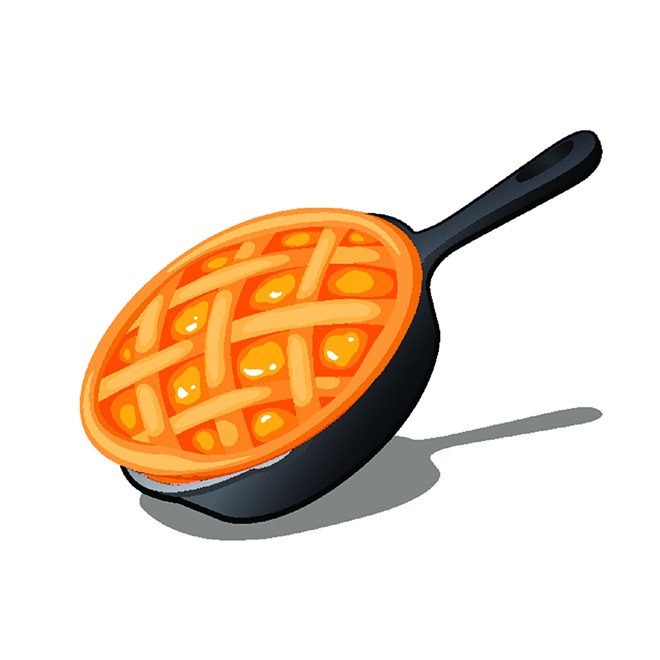 If you've got a smaller crowd, you can make this in a cast-iron skillet nestled in the coals with a lid on top. If the whole neighborhood showed up, a deep cast-iron Dutch oven is best. Whatever fruit you choose (for the most festive, we'd go apple and cranberry), the topping is the same: a cup of brown sugar, a cup of rolled oats, three-quarters of a cup of flour, a pinch of salt and half a cup of chilled butter, all pulsed in a food processor until it comes together.

For apple-cranberry cobbler, use three pounds of either Golden Delicious or Granny Smith apples – peeled, cored and seeded – cut into large pieces. Add a bag of fresh cranberries, a generous cup of sugar, and two tablespoons of apple cider. Mix it all up. Layer the fruit mixture on the bottom of the pot, then top with the streusel. Cover and place the whole thing in the fire for about 40 minutes. Move the pot to the outside edge of the fire, lift the lid and let it cook another seven or eight minutes to crisp the top. Vanilla ice cream is not optional.