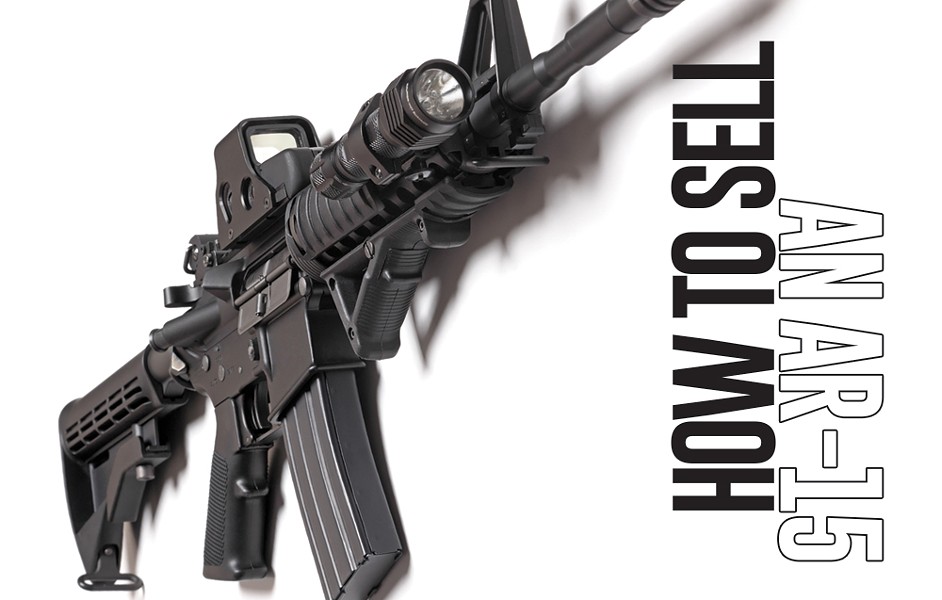 Three loud bangs echo across the warehouse walls, each about a second apart. It's an unforgiving noise, reminiscent of a battering ram meeting a steel curtain head-on. Wham – one Mississippi. Wham – two Mississippi. Wham – three Mississippi. The ringing of firepower on metal stops and then starts again, a three-peat of loud clangs in a milieu of near stillness. The jangling of tools in a workshop chimes in between shots.

It's a sunny Monday morning in early February at the headquarters of Spike's Tactical, an Apopka-based gun manufacturer. Kit Cope, the company's marketing director, points to a red metal box that's neatly tucked into one of the warehouse's back corners. The box stands about a foot higher than the average American man is tall, and on its front face there's a small circular gap, into which one of Cope's colleagues is currently test-firing a freshly assembled AR-15. It's the same classification of weapon used in the recent massacre at Marjory Stoneman Douglas High School in Parkland.

The device is called a lead trap, Cope says. It's designed to absorb the momentum of a bullet. Every firearm that's assembled at Spike's Tactical – from handguns to the company's signature weapons, an array of semiautomatic AR-15-style rifles – is tested on site before they're put into the hands of consumers. Some of the company's AR-15 models, such as the "Crusader," even come with a Bible verse engraved on the firearm's lower receiver. (For instance, "Praise be to the Lord, my rock, who trains my hands for war, my fingers for battle.")

If not for the gunshots coming from the warehouse's back corner, the setting could be described as calm. But as of late at Spike's Tactical – in part due to the warming of our nation's political climate – day-to-day operations have been anything but calm. Front office phones ringing with recurring death threats or threats to "firebomb that place" are generally considered outside the realm of calmness.

"The girls up front," Cope says, "they took the brunt of it. Even Friday, somebody called up and said, 'Hey, is this Spike's Tactical?' And he said, 'Fuck you, you're all a bunch of Nazis; go rot in hell.' Click. We get that."

On Jan. 7, the folks behind Spike's Tactical made headlines after they posted a controversial advertisement across the company's social media accounts as part of its annual design and marketing collaboration with Pipe Hitters Union, a Texas-based apparel company. Pictured in the ad, which ran in Skillset magazine, a publication with the mission of "redefining the alpha lifestyle": four heavily tattooed men wearing bulletproof vests, backs turned to the camera and seemingly relaxed but ready for combat. Each man is holding his own semiautomatic rifle as he stares down a group of masked protesters clad in all black, some of whom are holding makeshift weapons like lead pipes and heavy-duty flashlights; none of whom, like their counterparts, are holding guns. Behind the protesters, you spot a crumbling, burning city for which the demonstrators are ostensibly to blame.

When your eyes drift across the ad, it tells a short, albeit sensationalized, story. A series of cities are listed in the top left corner – "Berkeley-Portland-Charlottesville-Boston" – all of which have experienced protests gone awry in recent months. Captioned below: a series of hashtags like "#liberaltears," "#thisisntaboutrace" and – the Internet's apparent favorite – "#hillaryforprison."

But in the top right corner, the text is more provocative, and very much meant to provoke; it reads: "NOT TODAY ANTIFA."

"Antifa," shorthand for "anti-fascist" protesters, is a term used to designate far-left activists who use what's called black-bloc tactics. While protesting issues like racism and economic inequality, they cover their faces and often dress in all black to make themselves less easy to single out.