ICYMI: Rick Scott still isn't sure about climate change, a Polk County sheriff gets sued for pre-Irma shenanigans and more 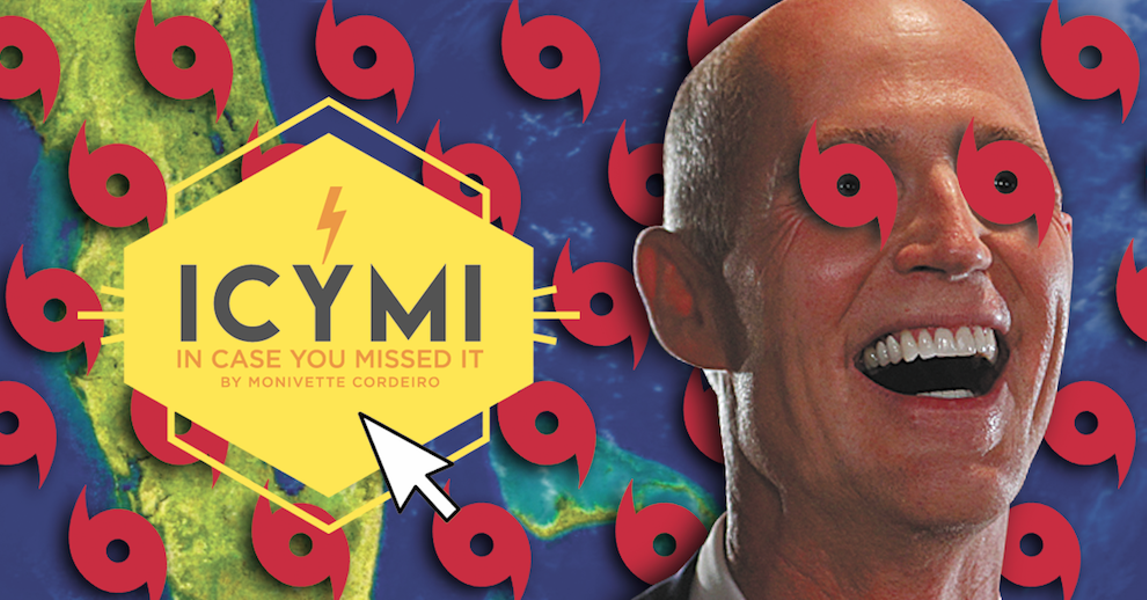 Irma tears a destructive path through Caribbean and Florida:

You'd have to be living under a rock (or with no power, as thousands of Floridians currently are) to not know how Hurricane Irma thoroughly destroyed islands in the Caribbean and parts of the Florida Keys last week. After Irma knocked out electricity and air conditioning to millions across the state, thousands of angry Floridians remain hot and still without power a week after the storm. In Florida, the death toll was 34 people and rising, including a mother and her two children in Orange County who died from carbon monoxide poisoning after a generator was left in the garage. That number doesn't include the eight elderly residents of a Hollywood nursing home who died after their air conditioner stopped working and another eight people who died in the Keys. So far, the state has listed more than $273 million in Irma costs for federal reimbursement.

Rick Scott remains unsure about climate change, even after Irma:

Gov. Rick Scott says he's still unsure about global warming after one of the strongest hurricanes on record hit Florida. While Scott was praised for his leadership during Irma, Politico reports Scott wouldn't say whether man-made climate change was real when asked. "Clearly our environment changes all the time, and whether that's cycles we're going through or whether that's man-made, I wouldn't be able to tell you which one it is," Scott reportedly said. It's probably just a coincidence that after the hottest year on record, Hurricane Harvey drowned Houston, western states are burning up in wildfires and Irma was one of the most powerful recorded Atlantic hurricanes in history. Yep.

Polk County Sheriff Grady Judd is being sued days after threatening to arrest anyone with a warrant who came to seek shelter from Hurricane Irma. The lawsuit, filed by Nexus Services and its risk manager Andres Barreno, claims Barreno was denied entry to a Polk County shelter unless he showed deputies his driver's license and underwent a background check. Judd has said his tweets threatening to take shelter-seeking people with warrants to jail were meant to stop registered sex offenders from going to these shelters. But Nexus Services alleges the Polk County sheriff was "engaging in a practice of discouraging people from seeking emergency shelter through fear, and conducting unconstitutional pedestrian warrant checks on Floridians in crisis."

Orlando is a finalist for Elon Musk's Hyperloop One transit project:

Finally, some good news: Orlando is a finalist for billionaire Elon Musk's Hyperloop One project. The tube-transit technology that allows it to travel 750 miles per hour would get riders from Orlando to Miami in 26 minutes. The 257-mile route in Florida is one of 10 winning plans for the Hyperloop One project. Maybe next time we get a hurricane, all those congested highways during evacuations will be a thing of the past.