In A History of Water, Maya Lin applies architectural solutions to ecological problems

In the contemporary art scene, they don't get much bigger than Maya Lin. Lin became widely known while still an undergraduate architecture student at Yale for winning the design competition for the Vietnam War memorial, to be built in Washington, D.C. in 1981. Her anti-celebratory monument inspired heated debate at the time, but has long been acknowledged as a turning point in the history of this building type. More recently, she's become a powerful voice in the environmental movement with her What Is Missing? Foundation.

I cannot help but see Ms. Lin's architectural training coming out strongly in her current exhibition at OMA. Maya Lin: A History of Water is more about the idea of water than about water itself. There is definitely an architect sending us messages inside this museum. "2x4 Landscape," a wave form, is made of grillions of individual studs fitted together in a precise way, like little soldiers. It is an architect's reproduction of water, but it isn't water.

Except for some maps, which bear the touch of her actual hand, these are all construction projects she designed: Lin didn't get on the floor and bang all those 2-by-4 studs together herself, and she provided plans for someone else to hammer the individual pins into the wall to make her Pin Rivers. (Hansen Mulford, curator of OMA, tells us that Lin supervised the installation via Skype.) They are directed, designed, scientific – and yet delicately beautiful. 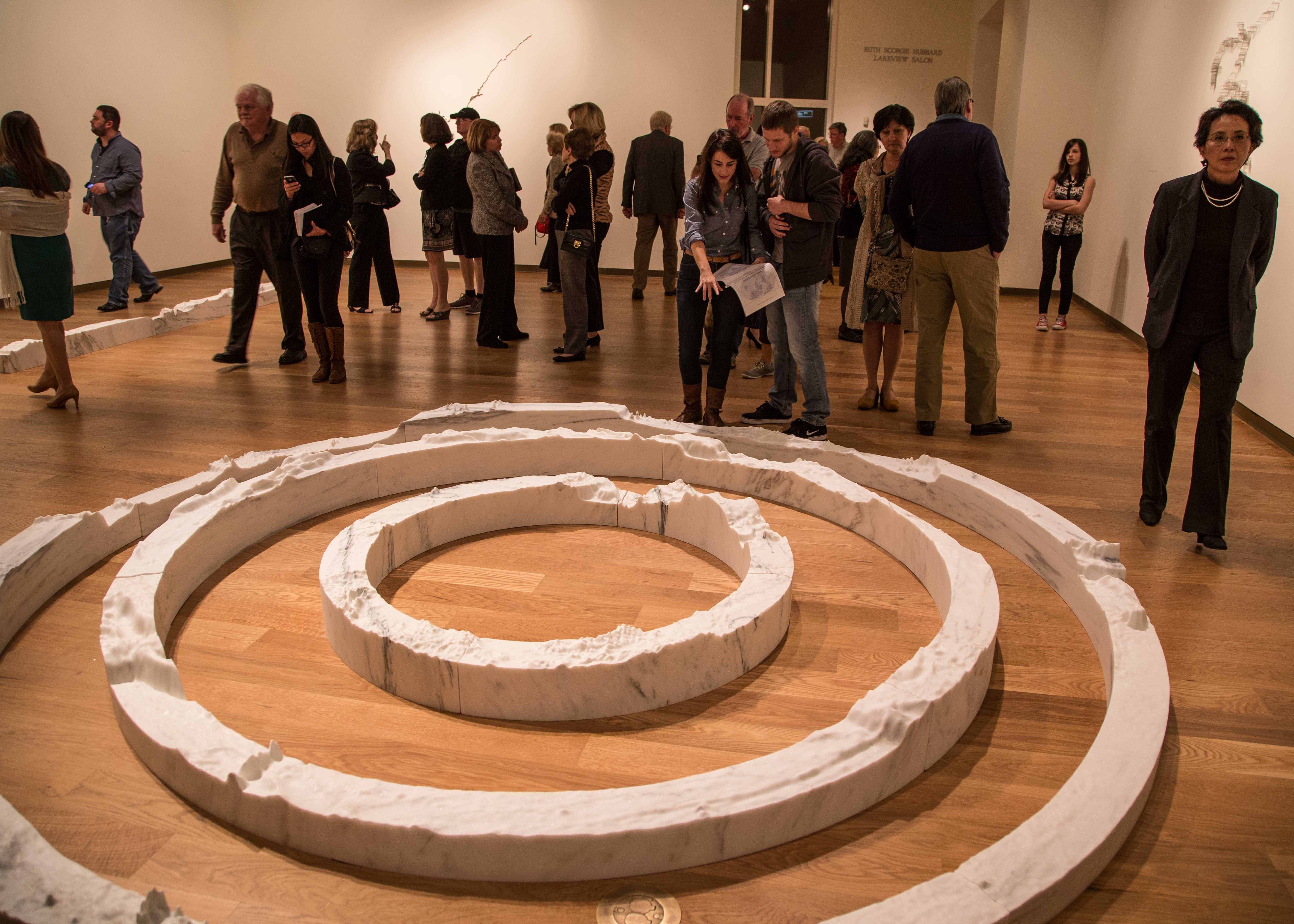 Marble circles and strips further her quest for water's effects: With "Arctic Circle," "Latitude New York City" and "Equator," she's represented the earth's form in three concentric marble circles. Water is implied, but stripped away, leaving the naked body of the earth exposed to view. "Water Line," her majestically suspended black grid, seems not so much like the form of the earth at a particular point, but rather like the Cartesian organization behind so much of our architecture today. (Lin calls it "a drawing in space.") Its organic humps and dips, however, are nature playing at being architectural on one level, while they are also architecture trying to be natural. It is a delicious intellectual puzzle.

Lin's work is so important today because she balances on that razor's edge between science and art. Architecture has a scientific basis: thoughtful analysis of a design problem, leading to the application of materials science and engineering into a design solution. And yet it must have some art to it also. Architecture must connect to us emotionally, tell us stories, and create a shared environment full of poetry and joy. Lin manages to walk on this tightrope with her minimalist work, which is why it compels so much rich conversation.

I found History of Water thinly linked to What Is Missing, Lin's current project, which is deliberately pushing her work further into the future. It is a library – to which anyone can (and should) contribute – of sounds, stories and photos of species we remember from our past that are not here any more. It is another anti-celebratory monument in her bold tradition, and it's a significant, if deeply regretful, gift to be given to future generations.