In ‘Gidion’s Knot,’ teacher and parent spar over treatment of a student with tangled results

With male-dominated dramas like American Buffalo and Orphans, Theater on the Edge has already established that they can do testosterone-soaked shouting matches as well as anyone in Orlando. Now, with their current production of Johnna Adams' ripped-from-the-headlines heart-wrencher Gidion's Knot, this sophomore troupe demonstrates that a show starring, directed by and designed by women can shake the walls every bit as well as the boys.

Gidion's Knot is set inside a Chicago public school, in a cheerful fifth-grade classroom (another impressively detailed design by Samantha DiGeorge) whose colorful posters of mythological gods serve as counterpoint to the gloomy plot.

We spend 90 tense, intermission-less minutes trapped with teacher Heather (Krystal Glover) in her classroom, as she verbally – and physically – spars with parent Corryn (Natalie Bulajic) over the suspension of her gifted but troubled son and its tragic consequences.

To reveal much more risks ruining some of the script's twists, but I feel obligated to provide a trigger warning/spoiler alert that the subject matter swiftly spirals into online bullying, homophobia and preteen suicide. 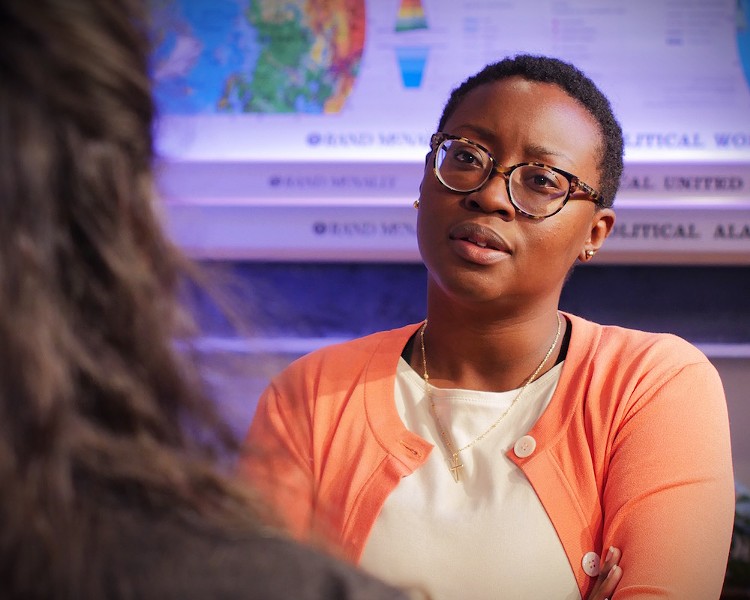 It's three-hanky stuff, and Adams' dialogue has a poetic edge that helps twist the emotional knife. But the hot-button topics are treated superficially, doled out sparingly for maximum shock effect but never deeply explored. Worse, the play is structured as a mystery, but the big reveals can be seen coming a mile away; without the element of surprise, the successive "shocks" feel like ghoulish grief exploitation.

Whatever its shortcomings, Adams' play provides two actresses an excellent opportunity to show off their dramatic range, and Glover and Bulajic take advantage of it with gusto. Glover gets the less interesting arc to play, since she's crying from the opening curtain to close, mostly vacillating between barely controlled frustration and abject fear. Bulajic, on the other hand, gets to emote everything from broken helplessness to bloodcurdling rage, and you can practically see the micro-objectives processing behind her expressive eyes as she assails Glover's reticence with one tactic after another. Director Pam Harbaugh keeps the pair circling the pint-sized school desks like cage fighters, but isn't afraid to let silence speak volumes between the agony-laden lines.

Corryn says she's searching "for something authentic in a field of bullshit," but there are no answers here for the questions raised, beyond a despondent observation that "dead children change nothing." Gidion's Knot is too bleak and brutal for me to say I "enjoyed" it, but if you want to see two superb actresses leave everything they have on stage, Glover and Bulajic deliver with a bang.