In Sette, Va and Trina Gregory-Propst have themselves a mainstay in the making

Sette, the buzzy Ivanhoe Village restaurant by Se7en Bites owners Va and Trina Gregory-Propst, may draw inspiration from Italy's food culture, but it's got a Brooklyn spirit at its core. The Propsts, you see, eloped in New York City back in the summer of 2013, then made their way across the Williamsburg Bridge to enjoy a wedding-day dinner inside the comfy confines of the D.O.C. Wine Bar.

"We talked that night about one day having a restaurant just like that," says Trina, and just three months after opening in a space that's seen the ghosts of Brian's Restaurant wage war on any new occupant, Sette appears poised to become a neighborhood fixture. No, it may not specialize in Sardinian fare, nor employ D.O.C.'s moody grotto aesthetic, but, like that Brooklyn boîte, the food is all about homespun rusticity and most of it proves irresistible.

You've doubtless heard about the scratch pasta Va so joyfully extrudes every day – up to 100 pounds of it, she says – and you'd be doing yourself a solid by throwing your face into the lasagna ($23) formed from one long noodle, or letting ribbons of wild mushroom pappardelle ($25) lap your chin with dribbles of umami – it's the only way to do these dishes justice.

My dining comrade, a classy dame who won the opportunity of eating with yours truly in a charity auction supporting A Gift for Teaching, ravaged the pappardelle in impressive fashion, pistachios, Calabrian chilies and all. "I'd come back just for that," she calmly stated, then, more excitedly, added, "and that!" She was pointing to a bowl in which one gorgonzola- and fig-stuffed arancini ($11) remained, under a pancetta crumble and a drizzle of pesto cream. We looked at each other and did the dance of polite silence. You eat it. No, you eat it. No, you. No, you! Hmm, maybe I should eat it. Nah, maybe I shouldn't.

In the end, we got the orb packed up for takeout. Don't make the same mistake, dear reader. If there's one rice ball left, somebody eat the damn thing! 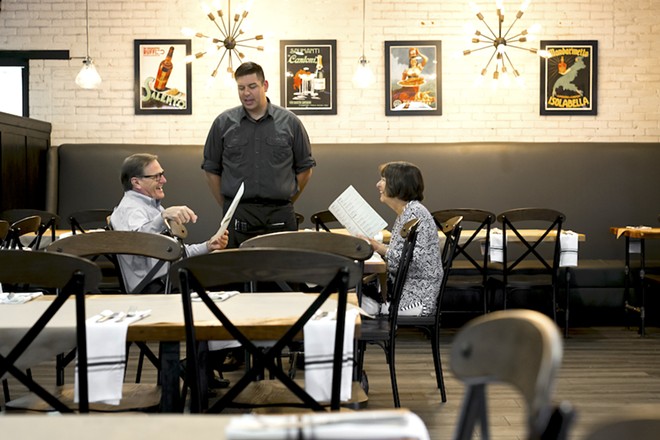 We didn't quite polish off the sweet-and-meaty assemblage of sausage, fennel and blistered grapes ($11), either, but not out of some protocol of courtesy. No, our eyes were diverted from the Umbrian dish after a "pot roast" risotto ($23) whipped up by Nonna – the bespectacled, red-aproned goddess of overfeeding, flabby arms and backhanded compliments – materialized from above. Or so it seemed. Oh, we didn't finish the risotto either, but microwaved offerings were served to giddy adult children of Italian grandmothers the following day.

From the stack of platters on our table, there was just one dish that failed to rouse. "The salad was just OK," said my guest. She was referring to the "cucina" ($9), a dense pyramid of romaine studded with cukes, tomato, goat cheese, pine nuts and garlic-Parmesan croutons. It's slicked in a Dijon vinaigrette and, on paper, this should be a killer salad, but the flavors just didn't mesh. I'd say it was the vinaigrette, but I know that dressing has a loyal following, so what do I know.

And by now you've likely sensed that portions here are large, so don't be alarmed by the large-format beers by Italian craft brewer 32, or the big-as-your-head desserts bearing all the hallmarks of the Se7en Bites imprint. If there ever were an exercise in futility, it would be trying to determine the more gratifying ending – a hefty slab of lemon cake ($11) or the tiramisu semifreddo ($11). Many would say neither and opt for a plate of amaretto cookies and milk ($9) instead.

My advice: Take a chance. It'll more than likely pay off. It's what the Propsts did, after all. They rolled the dice in opening a restaurant at this once ill-fated locale and, clearly, the gamble paid off. In Sette, they came up sevens.