Independent podcasters create radio by, for and about Orlando 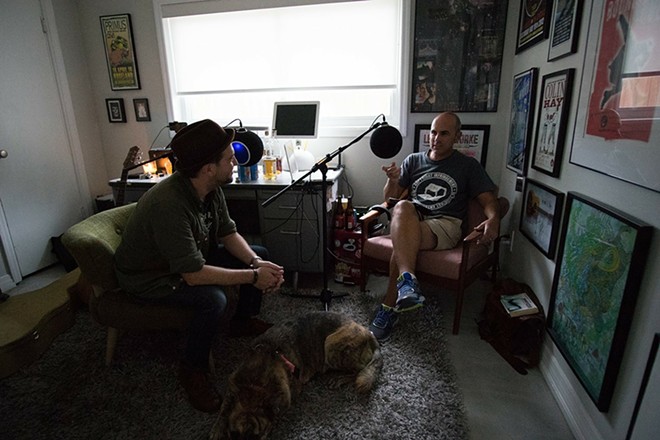 Peter von Taborsky launched his one-on-one interview show, Scotch and "Good" Conversation, in November 2015. Von Taborsky sought to do something fairly ironic with the medium: Turn off everyone's cell phones, refuse to use the internet for reference, and get to know his friends and some of Orlando's most interesting people through good old-fashioned conversation. The show is loosely structured in a way that creates a genuine connection between him and his guests: He tells the guest three things he knows about them, then he shifts between roles as interviewer and subject, asking his guest seven questions about themselves while they ask him three. So far his unique idea has been a success – von Taborsky's palpable interest in his guests and his willingness to be open and honest when answering their interview questions (as well as letting his guests read pages from his high school diary) has struck a chord in Orlando and beyond.

What's the main focus of your podcast?

Peter von Taborsky: I like the idea of people coming to me, and having a one-on-one conversation with them. I like the idea of shutting off our phones, shutting off the computer. And if I'm talking to someone and we're talking about a record or a movie and we don't know who directed it, we don't immediately go to the phone. We don't immediately look it up. We try to figure it out. I have really talented, amazing friends, so I thought, "I'll just interview them and have them interview me." We'll get done with some podcasts, I'll sit with someone I've known for eight years and I'll say, "You realize this is the longest we've ever sat in a room and had a conversation?" And I love that.

Do you have any background in radio that helped you create your podcast?

PVT: In the '80s I went to broadcasting school and I got a job as an intern on a radio station down in South Florida. I think I did it for about two days. 1980s radio was ultra-wacky stupid horrible. It was just a whole lot of Hawaiian shirts and captain hats and guys on coke. I thought my whole life that was what I wanted to be when I grew up and then I realized it wasn't.

Jumping into the podcasting thing I really had no idea what I was doing. I record in GarageBand. In broadcasting school, we put everything on reel-to-reel and cut the tape. I looked at it and I was initially scared of it, but I realized it was the exact same thing as cutting tape, you're just doing it digitally. I have some really talented friends who helped me set up and write some music, and helped me get all my ducks in a row. Then I just took it out there and flew it up the flagpole.

Episode to start with: Episode 30: "Tossing furniture in the pool, fishing, whiskey, baby butt thongs & the beer pocket – a conversation with Jacob Kaplan"

When someone moves to Orlando, excited friends and family often say, "Why are you moving to the Magic Kingdom?" or "I can't wait to come visit you at Hogwarts!" While there's more here than Disney, Universal and the rest, theme parks make up the backbone of Orlando's massive tourism industry and the city's economy in general. But when blogger Ken Storey (who writes for Orlando Weekly, among other outlets) went looking for a radio show about the City Beautiful's central industry in 2014, he came up empty.

Storey decided to round up other bloggers writing about theme parks and create a podcast discussing Central Florida's tourism industry, covering lesser-known stories and smaller attractions, and hosting guests involved in the industry's technical side who were often overlooked by more fan-based podcasts. In October 2015, Orlando Tourism Report found a terrestrial radio home on WPRK 91.5-FM in Winter Park, broadcasting live on Fridays from 10 a.m. to noon.

Why did you start your podcast?

Ken Storey: If you go to any major city, you'll find radio shows covering the central industries of their town. Orlando was missing that. I didn't understand why no one was talking about the tourism sector from a local's perspective with the understanding that those listening are familiar with – and likely working in – the industry.

What makes your show unique?

KS: The idea is to elevate the discussion beyond the press releases and blurbs that most of the theme park community conversation involves. I honestly got some inspiration from how TMZ does its television show. I wanted to cover the news behind the news, so I created a team of bloggers.

Everyone involved in OTR has their own media outlet where they cover the basic story; then we come together to discuss the other aspects of the story.

What are the benefits to your podcast of having a terrestrial radio home and access to a professional studio?

KS: Having the live radio format has meant we can be engaged with listeners in real time as they tweet or call into the show. We never had live callers or live tweet responses when we were only a podcast. It's helped us get guests much easier.

Interviewing guests in person is much different than via Skype or WebEx. I've found that having the two hours of live radio with a guest sitting across the table from me has meant deeper and more meaningful interviews. At the same time, the radio show means that I now have twice as much work to do to prepare it for the podcast. There's a lot of technical stuff that goes into the radio show that a podcast alone doesn't require.

Episode to start with: Episode: "Orlando Tourism Report at International Association of Amusement Parks and Attractions"