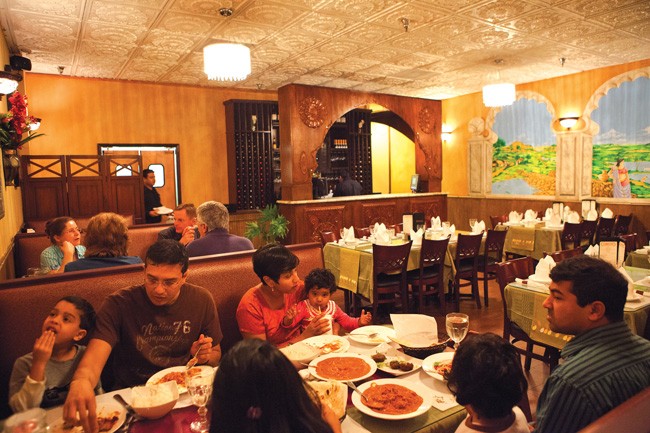 On the western divide of Highway 17-92, near the northern edge of Winter Park, in a derelict and ever-deteriorating shopping plaza that was once a bustling complex of commerce and blue-light specials but now begs for sweeping gentrification, sits a restaurant that defies the manifest decay. It’s a restaurant positioned to establish itself across the street in Winter Park Village but, because of more affordable leasing options, a restaurant on the wrong side of the proverbial tracks. That scores of diners willingly traverse the Center of Winter Park’s dimly lit parking lot and dodge its unrepaired potholes is, surely, a testament to Amit Kumar and the buzz surrounding his latest venture – Tamarind Indian Cuisine.

Kumar, who established himself as the Curry King of Central Florida with his popular Aashirwad and Bombay Café outlets, has boldly gone where nearly no Indian restaurateur has gone before – the city of Winter Park. Hardly a strange new world, the city, until now, was sadly devoid of proper South Asian fare (apologies to the Full Sail-adjacent Moghul Indian Cuisine and the short-lived Lotus Café on Park Avenue), but Kumar’s reputation appears to be stimulating the sort of chatter necessary to set afloat any restaurant undertaking. On one recent Friday evening, in fact, every booth and table in this modest space was occupied by diners seemingly in the know, with a line of about eight more patiently waiting near the entrance. So while servers, composed in the face of a full and boisterous dining room, rushed about, we found ourselves getting lost in the heady redolence of rasam ($3), the infernal South Indian soup, and delicately fried, heavily seasoned samosas ($4).

The kitchen doesn’t so much challenge the general perception of Indian food as focus on making familiar dishes better, be it sizzling chicken tikka ($13.95) or lamb pasanda ($16), cooked in a cashew paste. A subsequent visit on a less lively, though surprisingly busy, Tuesday night confirmed our initial findings: Pliant masaledar lamb chops ($19.95) exploded with tandoor-fired flavor; bold, aromatic machli tikka ($16.95), caked in masala, were worth the unusually long wait. Hariyali tikka ($4) cutlets, on the other hand, were lacking – the mashed filling of potato, cilantro, mint and green chilies could’ve used a little minced lamb, though that would essentially render them shami kebabs, a Pakistani staple. The dish called “Tamarind special chicken” ($13) was our favorite of the evening. The chicken lollipops cooked in an explosively rich tomato gravy enlivened with tamarind necessitated an extra order of naan ($2.25) to sop up the peppery sauce.

As compensation for our prolonged wait for dessert – a wait, I should add, that went completely unnoticed on our end – we were given complimentary kheer, a thick, creamy rice pudding ($2.95), and a gracious act to be sure. As compensation for a prolonged wait for an Indian restaurant, Winter Park has been given Tamarind, an act that’s sure to reap benefits for the city’s curry-starved denizens.