Inked in the clink

by Dege Legg and Travis Gauthier 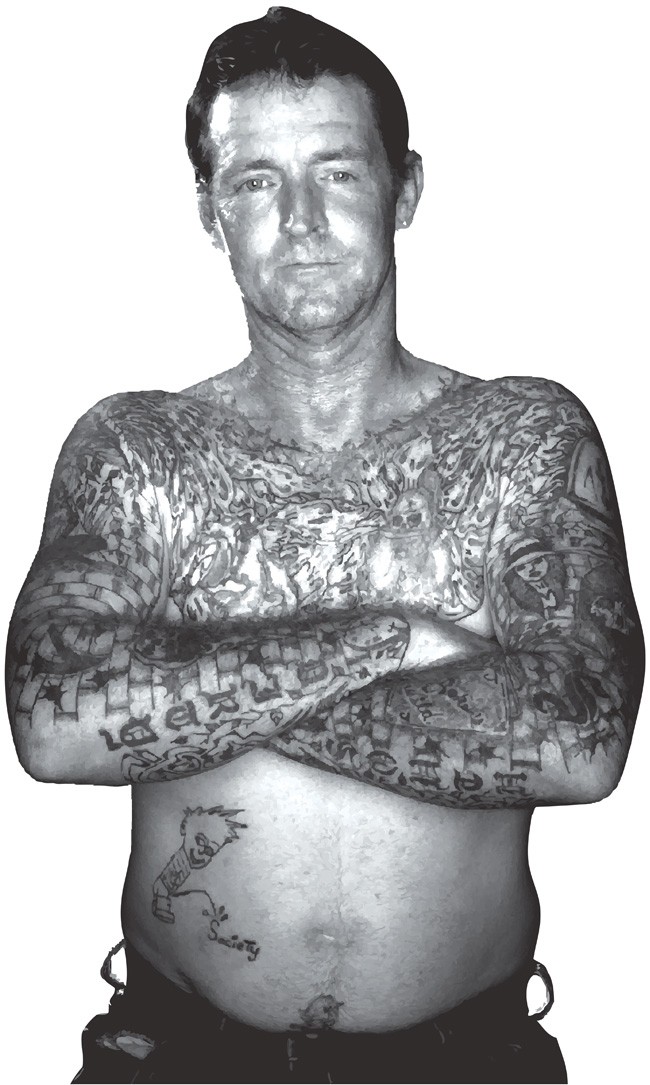 From its origins as decorative body modification in various ancient cultures, tattooing has gone mainstream in America during the last generation. Its detail-oriented evolution as art exemplified by modern tattoo artists like Guy Aitchison, Nikko Hurtado, Paul Booth and others is equally matched by the gaudy overdrive of popular culture and its take on the form, manifest in prepackaged apostasy and the theatrical bravado of prefab tats, tramp stamps and tribal tattoos. Walk through any Walmart and you’ll see a slovenly parade of assorted inked badges on people – festooned swag signifying trivial gains, unbroken loyalties, panoramas of mulleted heroics and an assortment of other postmortem Americana – all of it peppered across the arms, necks and legs of moms, dads, dudes, chicks and ghostly strangers as well as spendthrift trustafarians rocking $2,000 sleeves while gumming on the teat of outsider culture.

But no tattoos carry as much weight, respect, menace and symbolic power as those of ex-convicts tattooed in prison. Tribal war cries, gangland affiliations, shibboleths, insignias, teardrop kill counts, hard-time tallies and various forms of outlaw iconography engraved like caution codes into the skin. Leave your skinny jeans at the gate, Ponyboy. This is the world of real outlaws: long-timers, gangsters, one-percenters, killers, hardened criminals, shanks, shakedowns, race riots, solitary confinement and a host of other things that characterize the insular culture broiling within the confines of the American prison system. It’ll put some saltpeter in your bad blood, quick.

Born in Delhi, La., in 1964, Victor “Versus” Sandifer is a prison tattoo artist. He has spent 21 years doing time in both Texas and Louisiana, much of it giving and receiving tattoos. His arms and torso are a calligraphic maze of ink and ivy, bearing the literal scars and stripes of a man who has seen many an episode in the hourglass cages of the penitentiary. On parole since May, Sandifer is seeking employment while residing in a men’s shelter and going about the process of getting his life together. Betraying many a stereotype, he is articulate, sharp-witted, polite and friendly. With his razor-wire squint and institutional tan, Sandifer still has the lean muscularity of an inmate as well as the tense peripheral awareness of someone who has served time in institutions where sedate calm can be interrupted by bloodshed at any moment. Aside from that, Sandifer is pretty shy about his tattooing, saying the thought of being a working tattoo artist on the “outside” never really occurred to him until recently.

Dege Legg: Where have you done time in Louisiana?

Victor Sandifer: I been in almost every prison in Texas and Louisiana. That’s over a 21-year career.

What was the worst prison?

Darrington, Texas. Dangerous. Full of gangs, all carrying weapons. I had to carry a weapon every day. Saw at least one person a week get killed. Seen a couple hang themselves – they couldn’t take it. Scary place when you’re 19. I was young and built pretty good. I could fight. I can still fight, but I hate to. But you got to get your respect, then they don’t mess with you. Soon as you get there, you’re going to fight. It’s unavoidable. Have to fight back. They’ll challenge you just to see what you’re made of. If they find a weakness, you’re in bad shape. You’ll never get out of it.

How did you get into the trade of tattooing in prison?

If you don’t have money or family helping you out, you have to find some kind of hustle. Some legal. Some not so legal. You have to make the decision: How much trouble can I afford to get into? I got into tattooing in 1983 through a Mexican guy at Darrington who was short (near release) and fixing to go home. He taught me the trade.

How do you make a prison tattoo gun?

There are two types. For shade work, you use a Walkman tape player. The motor is slower and turns less rpms. For line work, you use the tracking motor on a portable CD player – it turns at a higher rpm. I always make a pair. You take the motor out. Mount it to a modified ink pen cap with Saran Wrap and then mount that to the barrel of an ink pen cut to length. Break the ballpoint off the pen. Run your needle through it. It slides right in. Once you get that mounted, you pull the spring out of the pen and stretch it out over a candle till it goes straight and pops in the middle. When it breaks, it’s going to leave a perfect point on both sides – that’s going to be your needle. The heat tempers it into it a perfect point. Then you cut it to length with fingernail clippers. Slide it through your barrel, mount it to the hub on top of your motor and then hook the wires to four AA batteries. Mount it to your wrist with an Ace bandage – you’ve got yourself a tattoo gun.

How many tattoos have you done over the years?

I’ve probably done two or three thousand tattoos in prisons. From single letters to full back pieces and whole sleeves. I’ve done plenty of tattoos on guards, too.

What do you use for ink?

People melt checkers, chess pieces, Bible pages, toothpaste, ink pen caps. But that ain’t good, because the polyfiber in them gives you bumps. I use Johnson’s Baby Oil. It’s petroleum-based. You burn it into soot and that becomes the ink.

What are the penalties for getting caught with a tattoo gun?

Depends on the place. Some take 90 days good time from you and lock you in a cell block for 180 days.

How much for a sleeve?

How do they pay it?

Sometimes I get it in “commissary” – stuff that they buy from the prison store. Some have their people send me a money order to my prison account. If it’s just a small piece, I do it for two or three packs of smokes. You do more single pieces than sleeves, because money’s obviously hard to come by.

Who were your best customers in prison?

I tattooed everybody: Mexicans, Chinese, white, black, all kinds of people. I did them all.

What kind of tattoos would they gravitate toward?

You got a lot of diehard ABers out there, but you also got a lot of old-school Southern rockers that just want a ZZ Top tattoo.

What’s the meaning behind teardrops?

Depends on the state you’re in. Some people wear them to count time under their left eye. Under the right, it signifies a dead homeboy. For some it’s the number of people they’ve killed. In Louisiana, it doesn’t mean as much – they just wear teardrops to be having them. In Texas, a lot of tattoos are gang-related.

Did doing tattoos help you pass the time in prison?

Yes. When they find out you can do tattoos, it’s a never-ending process. There is always somebody next on the list who wants to get tattooed. When you don’t have money or support on the outside that becomes your hustle and trade. It’s like having a job on the street. Regardless, I’ve always really enjoyed doing it.

Who is the best tattoo artist you’ve encountered in prison?

Uncle Pete at Angola. Been there 30-something years. Everybody knows him. He charges a lot, but he’s well worth it.

You’re a smart and well-spoken guy. How did you get started in the criminal life?

I got married at 17. Had a son at 18. Went to work for a petrochemical company making $27 an hour in 1981. Bought a new double-wide, a pickup, put my wife in a Trans-Am. I had a bass boat, a four-wheeler, a catfish pond, four acres of land, a dog, a cat and a horse. Even a horse trailer. But every day I did the same thing: get up, go to work, come home, watch TV and listen to the wife gripe. It got old. I got tired of it. Felt like I was missing something. You can have everything and it’s still not enough.

So I started riding with a motorcycle club in Texas. Got into the methamphetamine trade in the ’80s. Transporting from El Paso to Beaumont. But I didn’t get into real trouble till I started doing it. Drugs and girls. I lost my head. Went downhill from there. Sold to an undercover narc and got a slew of dope charges. Bang. Straight to prison.

Did the outlaw lifestyle suit you at the time?

I ain’t going to lie; I loved it, but it ain’t an easy life. I’m having a hell of a time getting a job now because of it. When I apply for a job, they see me. That’s strike one. Next is the background check, then it’s over. People can tell these are prison tattoos – no color in them. They automatically deem that I’m a bad person. That makes it hard.

What’s the moral to the story?

Don’t do the crime unless you can do the time … because you have to live with the consequences. You can be rebellious without going to prison. My advice to young guys: Just do right and stay away from it. I’m here to tell you it ain’t where you want to be. I lived it over 20 years. Now I’m back out here, trying to find a job.

There ain’t nothing fun about prison. It’s not glamorous. When the lights go out, you’re there by yourself. Ain’t nobody can help you but you. And it ain’t going to get no better. And it can always get worse … at any moment.

What’s next for Victor Sandifer? Where’s the road lead?

I’m getting old. I’m 47. Feel like I’m running out of time. If I catch another felony, it’s three strikes and I’m over with. I ain’t been perfect, I’ve made mistakes, but I’m a good person. I don’t like violence, but I won’t let anybody run over me – that’s a man thing; you take care of your business. Eventually, you have to make a change. But at a certain age, nobody wants to hire you for anything. It’s hard just to get somebody to give you a chance … hard, hard. I just want a little job where I can work and enjoy what I’m doing. Pay the bills. Not make a fortune – just get by. Just do my little thing and be happy. I just need somebody to give me a chance. Just a break, that’s all. Just a shot.

Dege Legg, aka Brother Dege, is a writer and musician living in Lafayette, La. His website is degelegg.com. n