International cuisine is not well-served by Rooster's kitchen

No charge for extra protein, though 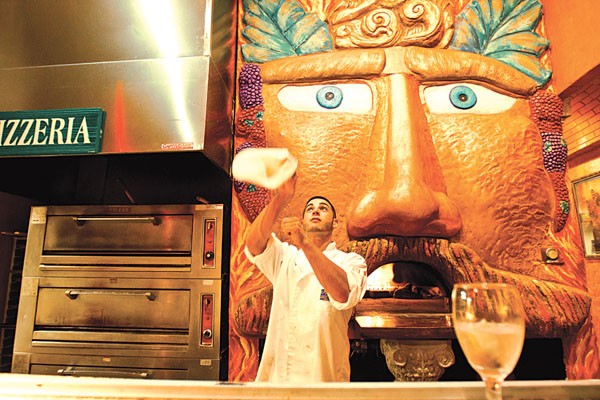 "If I were to open a global kitchen," my shiny-domed, stubbly-faced dining comrade noted, "Rooster's is the name I would use." And with that snide declaration, our unforgettable experience at Rooster's Club N Global Grille commenced.

Opening the doors revealed an eccentric amalgam of design elements that, frankly, took a while to fully behold. An Ionic column in the middle of the dining room fronted a garish mural of Roman god of wine Bacchus, with a working pizza oven for a mouth; paintings of assorted periods and styles drew prolonged stares before we focused on an elevated stage surrounded by faux brick and a mural of the World Trade Center. (Really.) Roosters abound, primarily in the form of sculptures perched on most of the restaurant's window sills, motionlessly strutting for the handful of diners, drinkers and patrons popping by to catch the live music and bellydancing.

Roosters are a symbol of good luck ­- "good food, good fun and good energy," our delightful and charming waitress affirmed - and after perusing the vast menu of Mediterranean, Chinese, Thai, Persian, Indian, Italian, American, Jewish and Mexican offerings, we were cautious, yet sufficiently hopeful to believe the kitchen would surprise us with its culinary range and breadth.

And surprise us it did. Midway through the Far East/Far West ($19) - at the outset, this was an enjoyable bowl of mussels, shrimp and fish medallions in a light, spicy sauce over pasta - said dining partner was scorned by the fickle spirits of the cockerels. After exhaustively chewing on what he assumed to be a morsel of seafood, he pulled from his fishy yap a bristly wad impaled with a stick. A closer inspection of the indigestible detritus convinced the three of us that the item was arthropodic in nature. Waves of nausea swept over my dining partners. Their queasiness fed my amusement; as abhorrent as the situation was, laughter seemed to be the only emotion I could muster.

Naturally, we summoned our waitress, who, upon being handed the buggy nugget, fought to contain her shock, horror and (like me) chortling. The response from the management? An apology from our inculpable server and an assurance that the dish - just that dish - would be comped. Not once did the chef, manager or owners (who were in the kitchen) stop by to offer a confession, concession or condemnation. In fact, our waitress notwithstanding, no one seemed contrite at all.

So, what does one do after suffering through such a gastronomic ordeal? Why, order dessert, of course! The chocolate mousse ($6) and raspberry tart ($6) weren't made in-house, so we figured we were safe.

Of course, I'd be remiss if I didn't mention all the other average-to-mediocre dishes we sampled, from the "World Tour" appetizer sampler ($16) to the Persian kebabs ($16) to the Philly cheesesteak pizza ($18.50) though, really, there's probably no point if you've read this far.