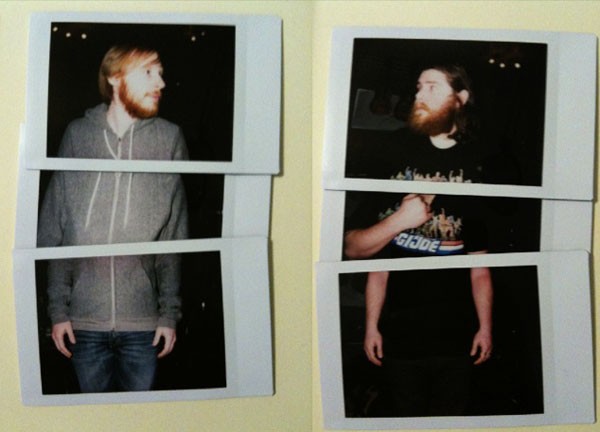 While the collaboration of two headstrong musical leaders seems more like a death wish than an answered prayer, Andy Hull and Kevin Devine extinguish this expectation and pave the way for a newfound optimism for the union of song-writing frontmen. As Hull led Atlanta indie rockers Manchester Orchestra, New York-based Devine focused on his own career as a folk-rock musician. The two had no intention of joining forces when they agreed to open for rock outfit Brand New in 2007, but after spending time on the road together and garnering respect for each other’s differing musical approaches, Hull and Devine (collectively known, along with other members of Manchester Orchestra and Brand New, as Bad Books) found themselves clawing at the doors of collaboration. When Devine first heard Manchester’s sonic endowment, he feared his own sounds might fall flat in comparison.

“I remember watching them and thinking, ‘All right, we’re gonna have to really show up every night. There’s not gonna be a night off.’ We were gonna get creamed if we didn’t turn out,” says Devine. “From there on, both creatively and personally, all three groups [Brand New, Manchester Orchestra and Devine] have kind of challenged each other to keep getting better at what we do.”

Challenging each other wasn’t the only thing Hull and Devine aimed to do with Bad Books, their debut album: Bearing idiosyncratic pop, feathery rock and largely accessible acoustic tunes, they pushed themselves to flee their comfortable singer-songwriter zones and enter the world of editing and producing, using their individual artistic outlooks on songwriting to extend one another’s capabilities.

“I just kind of had to let go,” says Devine. “Like with the song, ‘You Wouldn’t Have to Ask.’ I brought that song [to the recording sessions] with a different bridge for it, and if we had been recording that song as a Kevin Devine song, the bridge I had written probably would’ve been the bridge and there wouldn’t have been a structural change. But when Andy heard it, he was like, ‘This song is fucking great, but the bridge should be like this.’”

Devine remembers the realization that this change was more than superficial: “It was like, ‘That’s what I’m here for. I’m here to collaborate with these people and if they have input and ideas, it’s good for me, moving into my next stuff, to be more open-minded.’”

Allowing Hull to manipulate his breezy harmonies nudged Devine from contrived lyrical niceties toward impulsively brewed accompaniments, like the sublimely placed guitar riff that tears through the end of the Devine-penned “You’re a Mirror I Cannot Avoid.” Hull’s song, “Texas,” parallels Devine’s willingness: Rather than emphasize his typically heavy instrumental support, Hull’s gravelly vocals highlight his murmured lyrics. (“I am a towel that is soaked to the core / heavier now than it’s gotten before / and something inside of me needs more and more.”)

This receptiveness illuminates a striking opposition in their songwriting: While Devine agonizes over every word to the point of self-deprecation, Hull goes with his gut.

“I’ve always had this perfectionist impulse in my head,” says Devine. “I’m a bit intense and self-critical about the editing process, and I kind of like it to be dazzling by the time it’s first shown. [Andy] writes a ton and doesn’t use all of them. In that way, I think he’s a little more instinctive and intuitive, and I’m trying to take a little bit from that approach and blend it with the way I tend to do things already.”

Employing their differences and the advantages of their union, he says they labored over “developing harmonies that were really cool, accentuating some things and coming up with guitar lines that were almost like secondary melodies.” Even while heavily editing the album’s 10 songs (of which Hull and Devine each contributed five), they managed to keep the peace.

“I would say 90 percent of making the record went really, really smoothly,” says Devine. “We spent so much time around each other that our personalities mostly mesh, almost without effort at this point. Some guys [from Manchester Orchestra] I’ve lived with for months at a time; I watched some of them get married; they’ve slept in my apartment for weeks. It’s kind of like some surrogate family. Blending our two separate approaches ended up being not super-argumentative and pretty easy to get through.”

The two plan on tending to their musical obligations outside of Bad Books first, but Hull, Devine and the guys of Manchester aren’t ready to withdraw from this avant-garde record-making ease just yet.

“I can’t see why we wouldn’t [continue as Bad Books],” says Devine. “We all want to. We all like spending time around each other. It literally took us six days to do the record that’s out now. It’s not exceptionally strenuous, and I think now that we’ve seen there’s a response to it and that it’s something we can actually get out there and do, I think it’s something we all wanna do.”