Though lacking the smell of burnt rubber and risk of decapitation, Don Garlits racing museum is a good way to hop up an afternoon 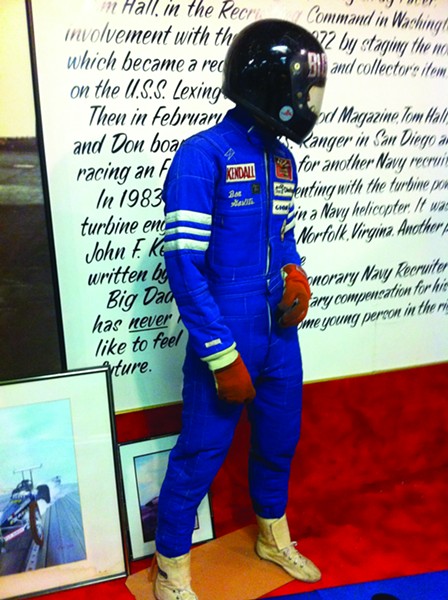 There’s something paradoxical about the long drive up Interstate 75 to Ocala’s Don Garlits Museum of Drag Racing. As delightful as I find the anti-abortion billboards strewn along the road every .25 miles – not to mention the subliminal effect of the equal number of Medieval Times billboards, which: have you been there? I totally want to go! – no, much as I enjoy all that, it seems perverse to spend an hour driving a measly 70 miles per hour to go look at cars that scream up to 340 mph. Unfair, even.

I should admit up front that I don’t know a damn thing about racing. But I lived for a while in Southern California, where custom car culture is seen as a legitimate art form, having bred artists like Ed Roth and Robert Williams and inspired no less a snob than Tom Wolfe (The Kandy-Kolored Tangerine-Flake Streamline Baby), and anyway this Fall Guide is all about the odd amusements Orlando has to offer, so I was game. Also, I’m a big fan of badasses, and Garlits, aka “Big Daddy” Don Garlits, aka “the Florida Swamp Rat,” is nothing if not that. His museum, really just a pair of warehouses crammed to the rafters with cars and memorabilia, is a shrine to not just his own badassery but that of dozens of other drivers whose cars he has collected. There’s a slightly homemade feel to the exhibits – a sign proudly proclaims that no tax dollars support the museum, and the organizing principles of a traditional curator are conspicuously absent – but it’s no grimy garage: The cars are all shiny and dust-free.

The space itself is crowded but clean; hand-lettered signs perched on easels next to the cars relate fusty Swamp Rat nuggets: “At Long Beach CA for the 1970 AHRA Grand American, in the final against Richard Tharpe, the tranny exploded, cutting the car in two and severing my right foot. I sold the wreckage to TC and Connie Swingle” (!). Next to a sign might lurch a mannequin in groovy 70s jumpsuit and helmet or, inexplicably, one in a powder-blue leisure suit and pith helmet. Racks of trophies and cases of medals gleam in DIY plexi reliquaries.

The majority of your fellow visitors will prowl through the rooms talking of blowovers and Cacklefests and such, debating the relative merits of Swamp Rat 5A (“1963 Dodge blown 413 cubic inch Max-Wedge engine”) and Swamp Rat 6A (“mandrel tubing bender and some ‘Swoopy’ tail sections by Arty Ross”) and batting around names like Mopar, Pogue and Moon. But it’s OK if you don’t know what the hell they’re talking about. I was happy just to wander the cluttered aisles and focus in on the details, eyeballing the frankly astounding design details on some of the cars’ chassis, geeking out on the miniature motor shop (complete with little 2-inch-tall pit lizards and wee piles of Pennzoil cans and oily rags) in the “engine room,” wondering what the hell all those gauges and dials do. Best of all is the Port-A-Tree, where you can test your reflexes off the line against a partner. The thrill of the Christmas tree is yours!

Garlits’ residence is on the property, right near the entrance gate; you might even see him cutting his lawn (rumors of a top-fuel funny mower are unconfirmed but awesome).