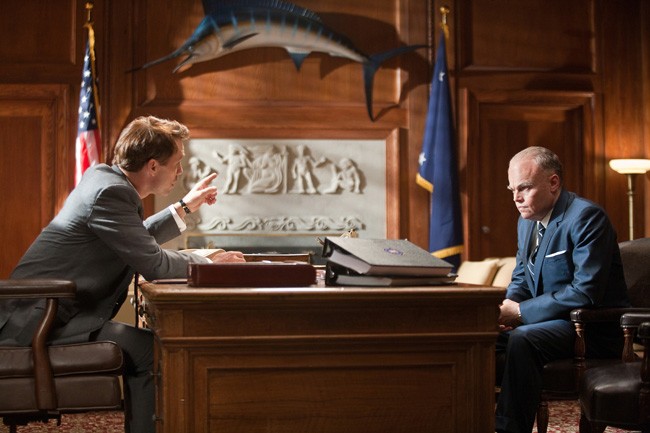 It starts with the eyes. Those baby blues are gone, replaced with dark brown contacts, almost single-handedly turning a vulnerable face into a determined one. In the service of Clint Eastwood’s J. Edgar, Leonardo DiCaprio looks like a shark and moves like a bulldog, always testing the length of the chain of sensible authority that holds him back. It’s a thorough transformation on the star’s part, a saving grace for a film that otherwise plays hopscotch with what’s actually known about the first director of the Federal Bureau of Investigation.

Dustin Lance Black’s screenplay flows freely between John Edgar Hoover’s later days, as he dictates his memoirs to a number of younger agents (when not contending with the Kennedys and Martin Luther King Jr.), and his early career, as he moves up through the ranks of the Justice Department and forms the FBI as we know it. In between fights against the ever-looming threat of Communism are the glamorous gangsters of the Depression era, the Lindbergh baby kidnapping and significant advancements in the field of forensic science and intelligence gathering.

Both in and out of the office, Hoover is surrounded by admirers – his mother (Judi Dench), his secretary (Naomi Watts), his second-in-command (Armie Hammer) – and critics alike, as the man’s noble goals come to fruition through increasing amounts of subterfuge. When we see Hoover telling his version of his life story, he insists that the public deserves clarification between heroes and villains, a mission statement evocative of The Man Who Shot Liberty Valance’s division between fact and legend.

Fact plays a questionable role in this film, as Eastwood and Black don’t shy away from rumors about Hoover’s closeted homosexuality and cross-dressing. The relationship between Hoover and Hammer’s Clyde Tolson is akin to that of Charles Foster Kane and Jedediah Leland, with the latter serving as an ultimately futile angel on the former’s shoulder, until it blossoms into something more. Handsome and gentle as Hammer is, it’s not hard to see why Tolson would make a worthy companion and confidant in Hoover’s eyes. However, as we see in just one withering scene from an otherwise doting Dench, the guarded Edgar is plagued by insecurities and unwilling to pursue any romance that might be wielded against him like so many of the secrets that he has filed away against his own political adversaries.

The looseness of accuracy stems from both an unreliable narrator and a willfully speculative screenplay, but it’s no more or less entertaining in its hypotheses than last month’s Anonymous or last year’s The Social Network were. And much like Jesse Eisenberg’s turn in that film, DiCaprio operates at a constant remove throughout, masking personal vulnerability with a quest for justice on a national scale. His portrayal is that of a man who craves power and then cowers behind it, ordering raids without conducting a single arrest himself, eager to fingerprint and identify the criminals while simultaneously pointing fingers and blackmailing with closed-door discretion. When moments verge on unwittingly perfect awards-bait parody (mostly regarding the more salacious nature of Hoover’s personality), the gravity and doubt of DiCaprio’s performance keeps the gossip grounded.

As for Eastwood, everything about his direction is dutiful. The visual palette of Tom Stern’s cinematography is expectedly desaturated, the editing by Joel Cox and Gary Roach is brisk given the 137-minute running time, the old-age makeup is effective – questionably so in Hammer’s case, though – and Eastwood’s score is a generic, tinkling thing. He tells a tabloid story with all the flair of Times New Roman, and while Hoover himself may have resented the film if he could see it for himself, some portion of his psyche would still savor the glory.