From tapas to trumpets, Maitland jazz lounge has matters well in hand 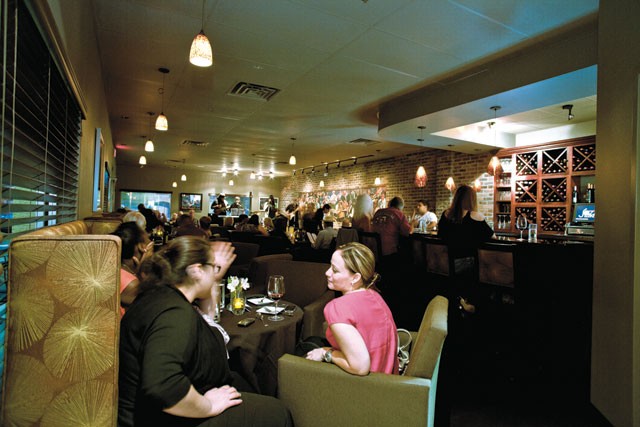 When dessert was done, and the band wistfully played "Autumn Leaves" in a room awash in shadows as the rain fell outside, the blue notes struck me as appropriate for a lounge named Jazz Tastings. But I'd be lying if I said the subdued mood was indicative of the place as a whole – quite the contrary, in fact. The warm greeting by owner Rory Frazier had us feeling like old friends; nods from the band had us thinking we'd been mistaken for regulars; and our waitress couldn't have been sweeter or more accommodating.

Why, even the menu – an interesting selection of savory small plates – came with a heartful of soul. Perusing the 15-item bill of fare, we chose a handful of dishes, and before we could say "Salt Peanuts, Salt Peanuts!" four of the five dishes we ordered were laid out before us (none of which included briny legumes).

First up: a trio of lump blue crab cakes ($13). The boilerplate orbs were made interesting only by the roasted tomato relish and black bean chili on which they sat and the garnish of horseradish-caper sauce. Springy pan-seared scallops ($15) fared much better and, again, the bottom layer – this time a chorizo-plantain fritter – was tops. (I should mention that the plates we were eating from weren't switched out, so there was a bit of adulteration and sauce-mixing going on.) When it came time to sample the chicken & waffles ($11), we simply took turns sticking our forks and knives right into the serving plate, which held three buttermilk-basted, panko-fried cutlets atop miniature wild rice waffles. Like Dave Brubeck, we took, ahem, a Time Out to fully savor the virtues of this dish, right down to the sweet splash of peppercorn-sherry cream.

In the penultimate platter sat three tournedos of beef ($15), sublimely flavored with a Negro Modelo demiglace and served with saffron fondant potatoes and wilted Swiss chard. Had the filets not been cooked medium-well, the beef could've shared top billing with jazz guitarist John Valeri. Our final dish, the one we had expected to arrive first, was the fried green tomato stack ($10) – layers of fresh mozzarella rounds, Spanish smoked paprika and a horseradish-dill remoulade. Apart from the heavy-handed saucing, chef Jose Bofill (ZaBella, Urban Flats, El Bodegon) can take deep Southern pride in this effort.

There's variety in the limited wine selection, but let's just say that Giant Steps are taken with the markup. Of the two desserts on hand, we devoured the pecan bread pudding ($8), flavored with Kentucky bourbon and accompanied with butterscotch bananas Foster, in mere seconds compared to the rum cake ($8), which lacked the spiced rum-flavored punch we sought. So we sat and enjoyed the sounds of Valeri and his band, but when we walked out into the stormy night, it was the moody, melancholy vibe of "Autumn Leaves" playing in that darkened room that stuck with me. While the food, drink and company were golden, it seemed only fitting that we left this jazz joint feeling Kind of Blue.