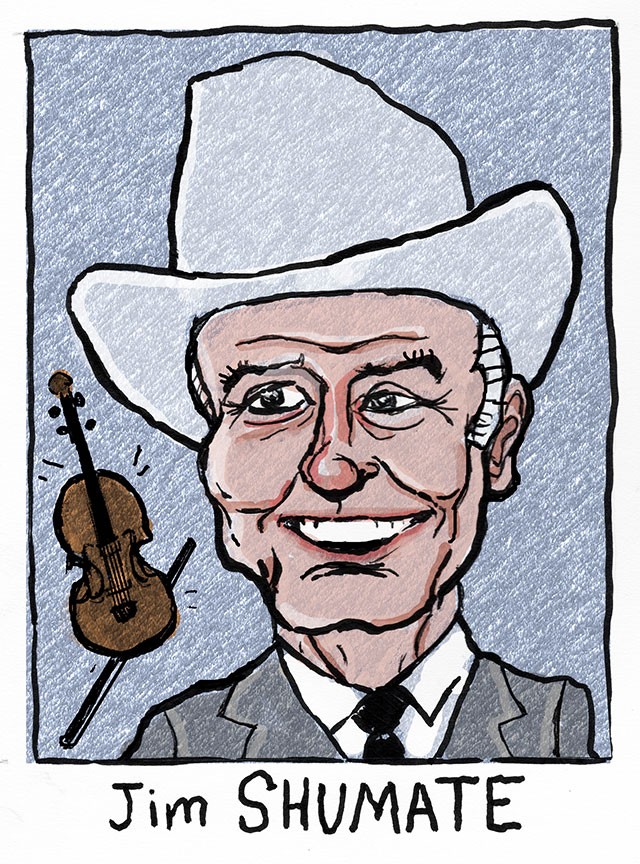 The story of how Jim Shumate was discovered sounds too precious to be true. But it’s part of his legend, and it goes something like this: In 1943, iconic bluegrass musician Bill Monroe was just passing through Hickory, N.C., on his way to Nashville, when he happened to tune into local radio station WHKY, hoping to catch some decent country music. Don Walker and the Blue Ridge Boys were playing a live show on the air, and something about the fiddler caught Monroe’s ear. Fortuitously, Monroe’s fiddler, Howard Forrester, had just given his notice, so as soon as he got back to Nashville, Monroe made a call to the 20-year-old fiddler he had heard on the air. His name was Jim Shumate, and he had been working as a furniture salesman.

“The telephone rang and a voice said, ‘This is Bill Monroe,’” Shumate later recalled, noting that all of his life he’d wanted to play the Grand Ole Opry, and Monroe was his bluegrass idol. “That shook me up, you know. He said, ‘Now you play the fiddle, don’t you? You’ve got Howdy Forrester, Tommy Magness and three or four others all mixed up together. If you play that type of fiddle, that’s what I want.’”

Shumate packed his bags and caught the next bus to Nashville, and the rest is history. The young fiddler played in Monroe’s Blue Grass Boys band every Saturday night at the Grand Ole Opry, and anywhere else they could get an out-of-town gig during the week. Shumate recalled once that he didn’t realize that the Blue Grass Boys were so influential on bluegrass music until it dawned on him while traveling with the band that other groups he saw playing live shows were imitating their style. “Every one of them would be trying to do the very same thing we had done on the Opry the night before,” he said. “I said, ‘Fellows, we’re making some kind of history, but I don’t know what it is.’”

Shumate quickly gained a reputation as an innovative player, and just a few years after he started playing with Monroe, he was asked to join to join Earl Scruggs and Lester Flatt in their band, the Foggy Mountain Boys. Though he wasn’t a big fan of recording – he preferred to play live – he can be heard on the Foggy Mountain Boys’ legendary first albums, and he’s now considered one of the best fiddlers in bluegrass. But Shumate, a simple man, soon grew tired of being on the road and traveling with the band, so in 1949, he quietly returned to his modest job as a furniture salesman in Hickory.

His contributions to bluegrass did not permit him to fade into obscurity, however. He was inducted into both the Bluegrass Hall of Fame and the Blue Ridge Music Hall of Fame, and he was presented with the North Carolina Folk Heritage Award. He continued to write his own music and recorded a bit here and there over the years, but even after receiving awards and accolades, he never let his talent or his reputation go to his head. When asked once about his playing, he simply said: “I just thank God for the gift that I have in it. And every day I live I can play it a little better than I could the day before.

Shumate died at 91, after suffering from renal failure.