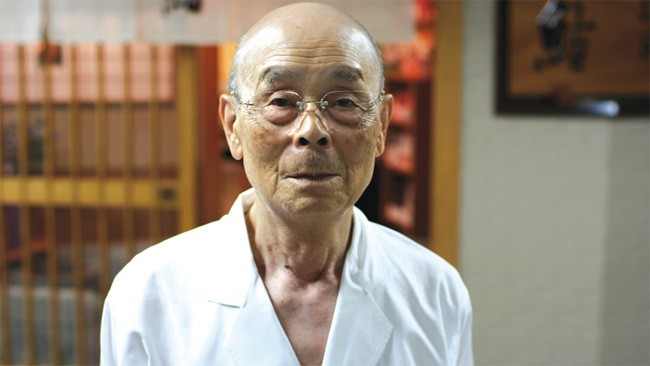 If, as it's been suggested by just about every successful person, the key to happiness lies in repetition, then Jiro Ono must be the happiest man on Earth. He's certainly one of the most acclaimed. Ono runs Tokyo's Sukiyabashi Jiro, a 10-seat institution located in a subway station that received the rare distinction of three Michelin stars. The Michelin reviewer claims the top ranking was the only one adequate to describe Ono's craft. But the drama buried within the tiny cuisine destination is one of philosophy, art, sport, succession and rivalry.

Director David Gelb, in his first feature outing, magnificently captures both the imperial undercurrent and empirical preciseness behind the operation of Sukiyabashi Jiro, matching the film's cinematography with the shop's spic-and-span sterility and utilizing long-lens serenity so that Ono's hypnotic monotony –  the chef claims the secret of greatness is in doing the same thing every day, whether that be devising original methods for pressurized rice cooking or buying choice cuts from hand-picked, similarly maverick market men – transforms into a guru-esque state of mind.

Jiro Dreams of Sushi could have easily maintained its distance and awe throughout, presenting an unquestioned tribute to Ono's flawless craft. But Gelb makes it look so easy that he humbly edits around his own methods, which must be effective. How else does he get such great material? How did he get this enraptured circle of critics, chefs and fans to reveal juicy bits like a second-born brother's bold attitude regarding opening his own restaurant rather than wait his whole life to inherit the mantle, or oldest son Yoshikazu's unsolvable inner riddle: He longs to inherit his 85-year-old father's crown, but the longer the elder Ono exhibits his perfectionism, the harder it will be for Yoshikazu to ever live up to. How about the whispers that it was Yoshikazu who earned those three Michelin stars, and not the father?

Dreamlike and uplifting, Jiro Dreams of Sushi is one of the year's best and most entrancing films.