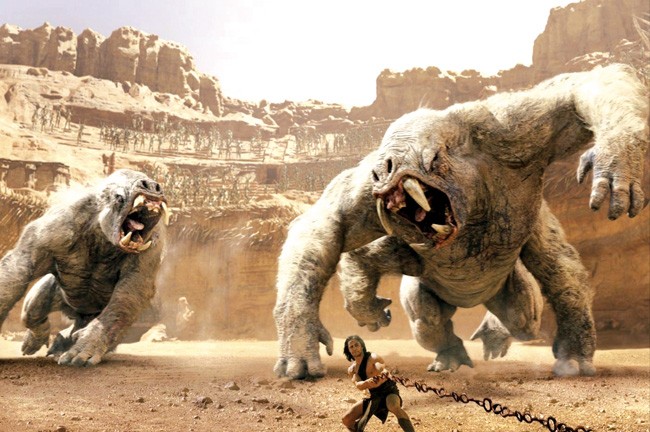 Since their publication in the early 20th century, Edgar Rice Burroughs’ tales of a Confederate soldier mysteriously transported to Mars influenced and inspired many a fan of sci-fi and fantasy works, including filmmakers and authors. So it’s little wonder that, upon having its own long-awaited screen incarnation, John Carter cannot help but resemble that which it has begat. Today’s Potter-fed tweens won’t know any better, though, and should be easily taken in by the film’s loud and colorful world, while parents sit back and consider a time when pulp material wasn’t dominated by pixels.

Director Andrew Stanton (Finding Nemo, Wall-E) doesn’t skimp on establishing Burroughs’ people, creatures, places and politics, almost to a fault. Beginning at the end, John Carter brings in Burroughs himself (Daryl Sabara) to determine why Captain Carter (Taylor Kitsch) would suddenly pass away, bequeathing everything to his nephew. As the author-to-be digs into his uncle’s journals, the story jumps back to chronicle John’s unwitting adventures on Barsoom (read: Mars).

Once the narrative settles down from its mystery-teasing framework, things fall into the familiar monomyth formula: a civil war not unlike our own between the humans of Helium and Zodanga; an outsider like no other who can leap further and punch harder, thanks to a lifetime spent in heavier gravity; an arranged marriage that empowered princess Dejah Thoris (Lynn Collins) refuses to accept; and an assassination attempt organized by a crew of ethereal spirits led by Matai Shang (perpetual villain Mark Strong).

Even at 132 minutes, the film feels breathlessly whittled down to a manageable set of plot points and a cast of archetypes. Kitsch has the growly voice and requisite pecs to play an intergalactic gladiator, but boasts little charisma with which to sell us on his disobedient streak and eventual change in conscience. Better is Collins, reasonably incensed by her circumstances, capable of fighting her own battles (though she must still be rescued in the end) and equally easy on the eyes.

Strong, along with pawns Dominic West and Ciarán Hinds, are equally flat in their displays of authority, although Stanton’s experience in animation means that the voice casting of the digitally rendered Tharks – giant, four-armed green warriors played well by Willem Dafoe and Thomas Haden Church, among others – pays off better. Similarly welcome, in an all-too-fleeting performance, is Bryan Cranston as a commanding officer with whom Carter clashes early on.

The novelty of the Tharks’ four arms doesn’t wear off easily; the gag of the entire race mistakenly calling Carter “Virginia,” after his home state, does. The unimpressive use of 3-D brings little to the experience, while Michael Giacchino’s rousing score adds a lot. There are nice touches throughout – a character forced to take himself hostage, a speedy dog-like companion, a well-timed smack to the head – that help offset a story burdened by power plays, parental struggles, family tragedy and even a doppelgänger chase.

Contrary to the problem that John Carter the character initially faces as he bounds across the face of a new planet, John Carter the film operates with a bit too much gravity for its own good, more likely to dazzle your average 12-year-old than summon your own inner child.