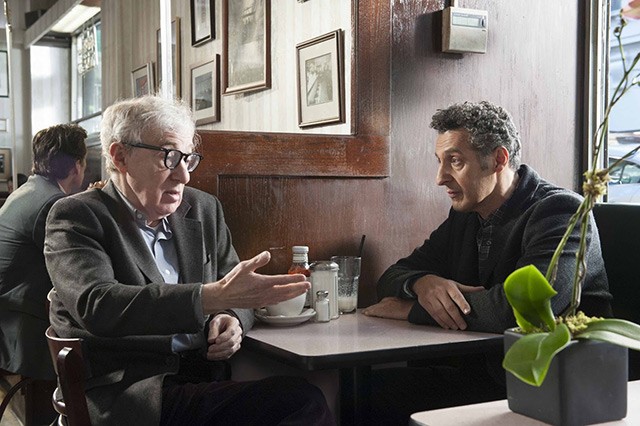 John Turturro is not, objectively speaking, a handsome man. You know this, and I know this. He knows it, too. Subjectively speaking, that changes. He’s confident, conversant, funny and has a hint of the maniac in his eyes. His face, you find as you take all of that into consideration, has real character.

In Fading Gigolo, which sees him play a mild-mannered florist turned reluctant (but rather high-priced) gigolo named Fioravante, that punim is the tool that Turturro wields as both actor and director. If he were handsome, it wouldn’t be a comedy; if he were without the many traits that give him character, it would just be a joke. But his face is the Goldilocks example: just right.

With Woody Allen as his pimp, Murray, Fioravante becomes the No. 1 loverman of his ZIP code – for a price, which they split. It’s all in practice for the initial request that comes to Murray from his therapist (Sharon Stone), who nervously wants him to arrange a three-way for her and her curious best friend, Selima (Sofía Vergara).

It’s a somewhat scatterbrained, novelistic film, though. The real plot is set off when Murray brings his adopted black child to the “lice lady,” a Hasidic widow named Avigal (Vanessa Paradis). Thinking she needs some comfort, Murray suggests Fioravante’s services under the guise of massage therapy. En route to her session with Fioravante, the Jewish neighborhood watchman (Liev Schreiber) with a lifelong crush on Avigal follows her to the appointment and susses out Murray’s plan, eventually kidnapping Murray to bring him before a rabbinical tribunal.

A complicated plot is fine for a novel, but in film, simple is almost always better. Each half of the plot is strange and funny in an entirely different way, but the two never mesh as a whole like they might in a novel, so the wildness of this storyline grab bag leaves the stitching far too visible.

But there is an almost perfect passage around the middle in which all of the extraneous elements part to the side and the film’s loneliness is examined. Fioravante and Avigal are characters from two different worlds, worlds that make it impossible to do anything about the budding connection they find together, but they smash face-first into the wall of love without worrying about it. For the briefest moment they find themselves. Not as a couple, but what they’re about as individuals.

It’s an elating, surprising piece of story, but it’s far too short-lived. Despite some funny moments, especially early on, before the film decides that it wants to be a little bit more than a straight comedy, you would have to say that the gigolo storyline doesn’t really fit into the film outside of the title. It’s a MacGuffin, but not on purpose. It was meant to be the funny part, but the story outgrew it and no one told Turturro. It’s brave to do something so different, but brave efforts don’t always work out. If they did, they wouldn’t require any bravery.