KELLER WILLIAMS Although we're still trying to figure out Keller Williams' deal – he's an acoustic guy who's not a folkie, a bluegrass guy with nary a twang and a nonjamming fixture on the jam-band circuit – plenty of people seem perfectly content to be confused. His slow-burn popularity among collegiate types and dirty hippies is typically the sort of acclaim that repels us, but there's something infinitely appealing about his goofy grin and highly enjoyable music that makes us forget about all that. He's a madman on guitar, writing oddly structured songs that run up to the brink of noodle and then, in the nick of time, pull back. (with Raul Midon; 7:30 p.m. at House of Blues; 407-934-2583; $18-$40)

THREE MO' TENORS Though the stated purpose of this three-man concert is "to showcase the African-American tenor voice, rarely heard in classical opera," it'll be more than Italian odes to fallen women that tumble from the mouths of the featured vocalists. In keeping with the stylistic diversity of their professional backgrounds, tenors Ramone Diggs, Kenneth Gayle and Marvin Scott will apply their tonsils to a program that uses opera as a launching-off point for forays into jazz, show tunes, gospel and hip-hop. And while sponsor/beneficiary the Metropolitan Orlando Urban League is lending us these tenors, it's donating a portion of the evening's proceeds to the worthy cause of Katrina relief. Meaning that, come hell and high water, black voices will be heard. (7:30 p.m. at Carr Performing Arts Centre; 407-849-2001; $50-$125) 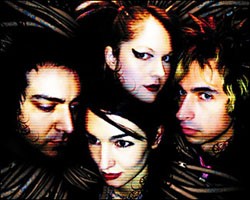 MINDLESS SELF INDULGENCE This band represents another chapter in an increasingly long book called Heavy Metal Has Lost Its Fucking Mind. We've said it before, and we'll say it again: Anyone who's convinced that metal in 2005 is the same as metal in 1985 has not been paying attention. At all. These guys are heavy and aggressive but, like, techno-sounding and stuff. Not "industrial" techno. Danceable techno. With screeching noise and an overwhelming stage presence. Totally metal, but totally not. (with Suicide City, Retard-O-Bot; 7 p.m. at House of Blues; 407-934-2583; $14-$17)

THE MUSTARD SEED 20TH ANNIVERSARY GALA Dedicated to furnishing housing for people in the process of rebuilding their lives – from personal or natural disasters – the Mustard Seed of Central Florida always has its hands full, but its pockets need some filling, too. Especially now, as people displaced by Katrina come calling. Valiant Mustard Seed volunteers are responding to the usual needs as well as to the emergency influx; they set up a special disaster fund, but this elegant fund-raiser was planned ages ago. The ticket buys a cocktail reception, a silent and a live auction, dinner and dancing. And there will be a heartfelt recognition of founder and executive director Carol Kane. As the website explains, in 1984 Mustard Seed "grew from the personal commitment of a compassionate woman who saw all homeless people, regardless of race, creed, or social status, simply as 'God's children' in need of assistance." Can't afford the ticket? Visit the website to donate or volunteer. (6 p.m.-midnight at Disney's Contemporary Resort; 407-875-2040; www.mustardseedfla.org; $150)

HISTORY These guys are one of our favorite local bands, and we really wish they would play out more often. (It's fine to avoid wearing out your welcome in local bars, but you gotta help us remember you're around.) When they do wind up on a bill, History is often the highlight of the show, with an engrossing blend of sonic overload and punk-powered energy that leaves the indie-rock kids struck dumb and the punk kids wondering why all their CDs at home sound like crap. They remind us of a cross between later Cave In and, like, Stereolab. OK, we didn't say History's sound made sense, we just said we liked 'em. (with Watch Me Disappear, The Other Side of the Sky, What's Yr Damage?; 9 p.m. at Will's Pub; 407-898-5070; $5)

PARK AVE CDS MUSIC SHOWCASE Having a panoply of "music stations" on your cable dial doesn't mean that your chances of encountering actual music are particularly high. To cast a "nay" vote against airtime-sucking newlyweds and Best Weeks Ever, make plans for a monthly pilgrimage to DMAC, where Park Ave CDs will present screenings of the latest music-related DVDs to hit the market. First up is an examination of select cuts from a four-disc box set that spotlights the work of accomplished music-video directors Anton Corbijn, Jonathan Glazer, Mark Romanek and Stéphane Sednaoui. Admission is absolutely free – which, when Bright House fees are figured in, is less than it cost you to enjoy U2's "Mysterious Ways" the first time. (7:30 p.m. at DMAC; 407-992-1200; free with ticket available at Park Ave CDs' Winter Park and UCF Student Union locations)

HORRORPOPS Before she led cheerleading chants about bananas, Gwen Stefani was the queen of ska, but those days are long gone. And good riddance. At its best, ska was an excuse for no-talent punk rockers to rape the corpse of Bob Marley and at worst an excuse for drunken frat boys to behave like drunken frat boys. Enter the Horrorpops. These Scandinavian badasses are more psychobilly than ska, but we dare you to listen to their latest disc, Bring It On!, and ignore the debt that singer and stand-up bass-slapper Patricia Day owes to No Doubt. Then again, who cares? With her blood-red lips, Bride-of-Frankenstein hair and straitjacket miniskirts, Day is the sexiest little hellcat this side of Bettie Page in her BDSM prime. As for the music – the ghouls-and-guitars scene is looking for a great white hope, and this is the band that's going to bring psychobilly to the masses. Catchier than cholera and as deadly, Bring It On! boasts the Bauhausian doo-wop of "Walk Like a Zombie," the Angus Young-on-crystal-meth pop-rocker "Freaks in Uniforms" and the return-of-the-king-of-rock revenge fantasy "S.O.B." (with Roger Miret & the Disasters, Left Alone; 8 p.m. at The Social; 407-246-1419; $10)