Photos and story by Christopher Balogh

A rodeo cowboy paces on the platform near the metal chute. Inside awaits a bucking horse that he's never even met. The horse kicks wildly inside the close quarters, making high-pitched ringing noises with every pummel. The cowboy psychs himself up for the moment that he holds on for dear life in front of an audience of 4,000 at the 77th Silver Spurs Rodeo in Kissimmee, Florida. He slaps his face and chest to awaken that warrior spirit. His eyes focus on the horse, darting a look of superiority over the animal.

"He's got four hooves, two ears, two eyes and a brain. He can do absolutely whatever he wants," says Lane Rowland, a 25-year-old cowboy based out of Dalton, Georgia. "You never know, but I'm going to try to best this animal."

On Rowland's left arm, his riding arm, is a self-made shock absorber fashioned of tape and braces. It's a preventative measure that has been years in the making, as he learned from teachers in his past, including his own father.

"I grew up in it. My dad rode horses and fought bulls," he says. "In my mind and from what I've been taught, it's one of the best challenges of life."

Just to be part of the history of this place can be considered an honor.

It's one of the oldest rodeos in the country and the largest east of the Mississippi. In 1941, it all started as a club of the Osceola County Ranchers. They performed the Quadrille, a sort of square dance on horseback, all over: in the Orange Bowl Parade, in the inaugural parade for Florida Gov. Spessard Holland, at benefits for disabled children and World War II veterans. Their notoriety grew, and in 1949, the club acquired 15 acres on Highway 192 and built the Silver Spurs Rodeo Arena. The first rodeo in this new location was held July 4, 1950. In March 2002, demolition began on the historic arena and construction started on the new Silver Spurs Arena, which reopened in October 2003.

Since the 1950s, the tradition has lasted seven decades. Family roots lie at the center of this rodeo. Chris Baker, the current but retiring Big Boss of the Silver Spurs Rodeo, is a part of that history.

"My grandfather was a professional rodeo cowboy and won it in the early 1950s. He won the Cheyenne Frontier Days," he says. "My father rode through high school and college. Both of my brothers went to college on rodeo scholarships. I was more into playing football, but I grew up in it. It was part of the family business."

The Baker family has had members in the Silver Spurs Rodeo Club since the 1960s. The whole family, including Chris, raised cattle and ran a rodeo bucking-bull business — selling bulls to rodeos.

Baker, when he's not running the big show, is the director of the Osceola County Sheriff's Office Investigative Bureau, serving as Captain, an officer for 26 years. As Big Boss of the rodeo for the past two years, Baker finds passing the torch to be part of the tradition, not a relinquishment.

"I'm just stepping aside, not stepping away," he says. "I'll continue to serve as a member and help out in any way, but it's somebody else's turn to take this opportunity."

Baker gives due credit to all the cowboys and volunteers that make the show happen. He says that what matters most to him is that they put on a good show for the people who paid their hard-earned money.

And that Friday, after Rowland made his cash-winning eight-second ride, a standing ovation happened at the very end of the night. An ovation partly due to the last competitor, their hometown hero, Dee Lewis. 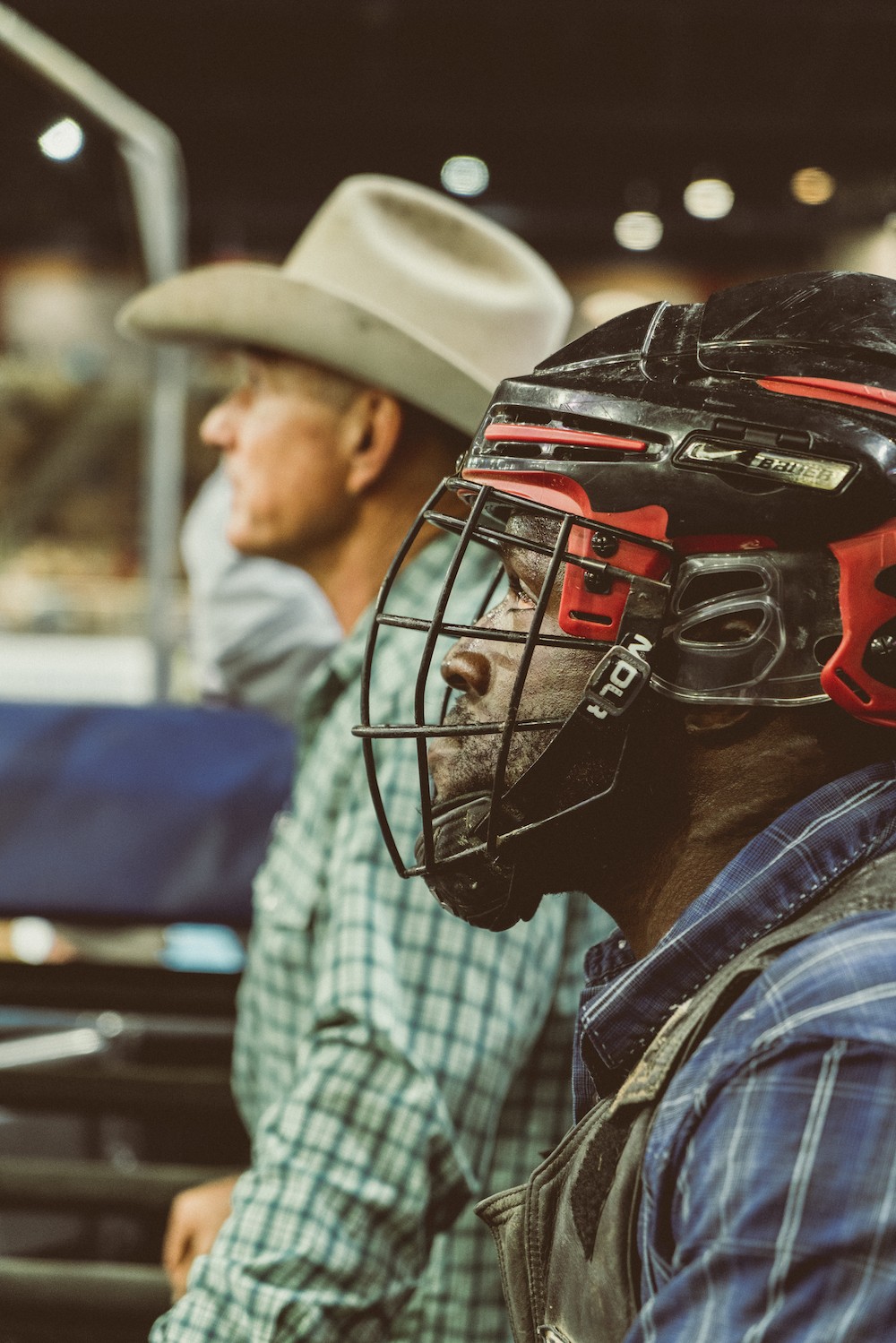 When the announcer said his name during the bull-riding category, the crowd got to their feet. Yes, it was the last ride of the night, but still, it takes a certain type to gain the respect of this audience. Dee Lewis has just that. At 27 years old, even though he was raised in Fellsmere, Florida, Lewis calls Silver Spurs Rodeo home. He's won this rodeo in the past and many others across the country.

Lewis has been bull-riding since the age of 10. He says he grew up in "the hood" in Fellsmere, but started hanging out with the "right crowd with a different lifestyle."

"I owe a lot to the Lathero family [owners of the Fellsmere Riding Club]. At 10 years old, and throughout high school, I would go to their bucking arena and ride bulls every Wednesday," he says. "What they did for me is worth more than a million dollars."

Lewis looks like a fullback in cowboy jeans. His initials are branded on his spurs. When he waits his turn on the platform, his bull rustles and gobs of snot fly from its nose. The bull looks mean, but Lewis doesn't waver. He stands still. He barely speaks to those around him but wears a smirk lightly on his face. He didn't stay on for eight seconds that night, but it doesn't faze him.

"I have a different mindset. I used to be wild and get all amped up, not anymore," he says. "I don't practice or prepare through the week. I've won years past and been bucked off years past. I just ride and do my job. I love it."

His practice is the game itself. Normally, pre-pandemic and pre-injury (he currently has an injured wrist from a car accident), Lewis says he would compete in rodeos nearly every weekend. He has competed in Louisiana, Alabama, Mississippi, Texas and Nevada. Now, his schedule is on semi-hiatus until he heals but he will pick up rodeos along the way.

When he's not riding bulls, he works for a vacuum company that cleans sewer lines and storm drains throughout the state of Florida. But riding bulls is where his mind always takes him.

"I watch videos every day of bull riding. I critique and watch my [own] videos of bull riding over and over," he says. "I live off it. It's all I think about. When I turned 19 years old, I won a touring pro event that paid out $10,000 and thought, 'I guess I made it.'"

His 3-year-old daughter has been on the road with him since she was just 11 weeks old. Teaching kids about how you can come from nothing and succeed is a big part of why he does it. He says he recently did an interview with PBS Kids talking about his career in rodeo.

"From where I came from, I want to give kids hope, that's why I did that interview. To let them know you can do whatever you want. Some people didn't think I could be the bull rider I am today," he says. "I've traveled and competed all over. It's a blessing."

Lewis takes this notion seriously and wants to bring this attitude toward his next goal: He hopes to join the Bill Pickett Invitational Rodeo, the first all-Black touring rodeo association in the country. In turn, he hopes that this opportunity will help him enter the Professional Bullriders Association and compete in big shows like Cheyenne Frontier Days.

"This goal of mine could set me up for the rest of my life," he says. "It will also help me work towards getting into the Professional Bullriders Association and earn sponsors."

Not everything at Silver Spurs Rodeo is about bucking your way to the top. The tradition that started this rodeo, the Quadrille, is an entry point into horsemanship for kids.

The Quadrille isn't Little League. They aren't using tees — these are real horses. No ponies here. In the month of May, middle- and high-schoolers practice at the Silver Spurs Club Ranch in Kenansville. An outside arena sits off the Florida Turnpike; horses run wild in the fields behind it. These young cowboys and cowgirls pull up to practice with their families and their own horses in tow.

Calling it "square dancing on horseback" is something of a colloquial statement. It's true horsemanship, a strength of command over the animal. It's choreography with nature. Sets of two riders weave in and out in patterns with a corresponding duo across the arena. They make circumventing moves and ride in opposing circles as well as harmonious roundabouts. It's a well-rehearsed play of skills that takes time and patience to master. Ashley Fluke, the chair of the Quadrille, sees it as a satisfying part of her volunteer job and a tradition that runs in her family.

"My great-uncle Oscar 'Slim' Partin was a founding member and the original Quadrille chair," she says. "During practice, they will get drills wrong or have trouble with a horse, but it's very rewarding to get a big hug and thank-you after a performance. It takes talented riders with dedication and commitment. It's hard to give up Sundays for several weeks and occasional weeknights. There are leadership opportunities where kids take on lead positions and coach younger riders."

Even though the view is something from the past with old Western traditions, the modern world does sneak in. While some of the young riders wait to enter the arena on horseback, they check Snapchat and Instagram, scrolling on the saddle. Fluke's 15-year-old niece, Natalie Booth, likes to hold back until the main event.

"I don't like to take photos or videos of the practice," Booth says. "I'd rather show it when we're at the rodeo, putting on the final performance."

The Quadrille was a hit at the big show. The audience roared when they hit the dirt on their way into the arena, seemingly knowing that this event was the lodestar for the entire Silver Spurs Rodeo. Without the Quadrille, it's possible to think that the arena that they sit in wouldn't even be there. 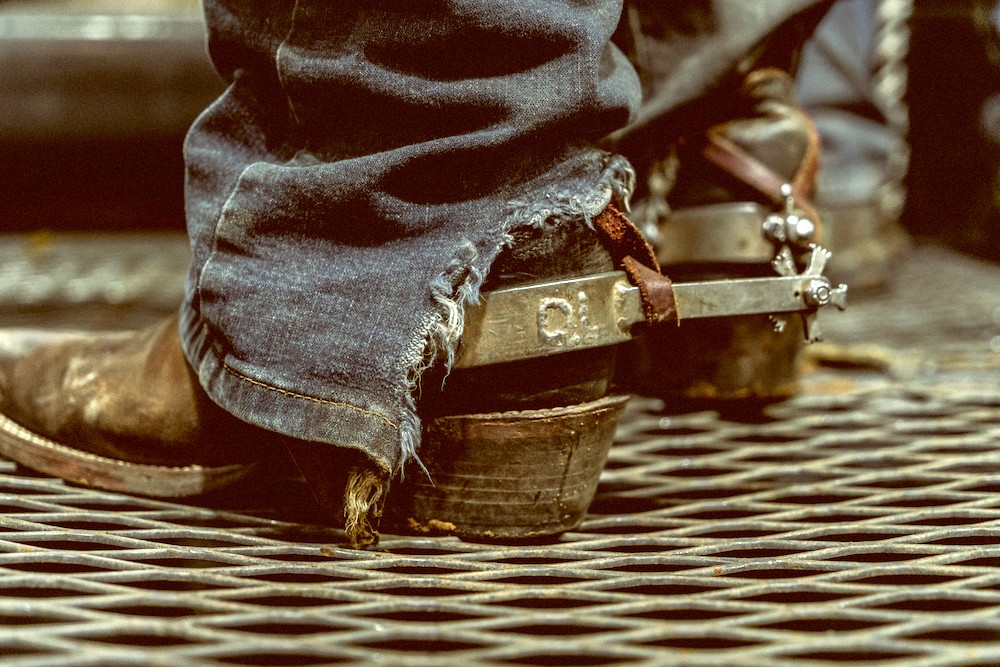 More than a sport

These are cowboy athletes. This is not a sport that you can just hop on and try out. It's a battle with Mother Nature. Animals have brains and personalities, and these cowboys and cowgirls figure out how to overcome their defenses. They learn to build up the nerve, knowing it's possible they might get battered by a horn or hoof. They can work out and practice as much as they want, but until they get into that dirt arena with that animal — that's the real experience. The real sport of it. The Kissimmee community stands firmly along with this historical tradition. The sport grows sometimes in lifestyle, sometimes in family. Sometimes in both.

Rowland, the Georgia-based cowboy, believes it's the last true American sport and does more than just entertain.

"Before any rodeo, you're going to pray. You're going to show respect to the military, law enforcement, firefighters and healthcare workers," he says. "Then, you're going finish it off with the national anthem. After that, you're going to be watching some of the coolest stuff you've ever seen in your entire life."