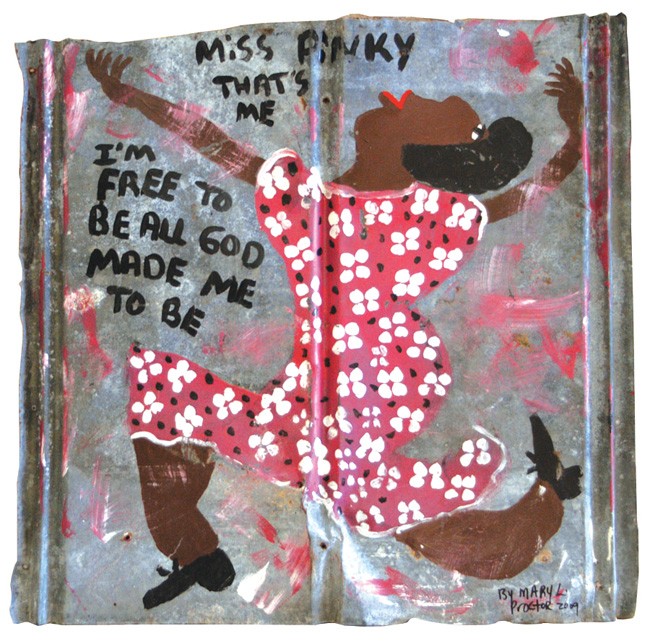 The Art of Missionary Mary Proctor

I have two mutually exclusive addictions – accumulating obscure collectibles and watching Hoarders on A&E – that, considered in combination, often make me mutter, “There but for the grace of God go I.” But what if I did go there, and instead of burying me alive under adult diapers and kitty corpses, divine grace turned my refuse into renowned art that appears in prestigious galleries around America? Why then, I’d be successful self-taught artist Missionary Mary Proctor, who will be in Winter Park this Friday for the opening of an exhibit dedicated to her work at Crealdé’s Hannibal Square Heritage Center.

Mary Proctor’s life is a literal embodiment of the adage about God closing one door and opening another. In 1995, she was a 35-year-old junk dealer in rural north Florida, surrounded by scrap and suffocating with grief for her beloved grandmother, aunt and uncle, who had just died in a fire. One day, Proctor says, the Lord told her to try painting one of the old doors piled in her yard, telling her, “The door is the way.” By early the next year, she had a solo show in New York of her spiritually inspired creations. In the 16 years since, her work has been collected by institutions focused on folk art including the House of Blues chain and Orlando’s Mennello Museum of American Art, which provided pieces from its permanent collection for the Hannibal Square show.

My first encounter with Proctor was in Baltimore’s magnificent American Visionary Art Museum, where a pair of her 84-inch doors are displayed. After meeting the artist at Downtown Disney’s annual Festival of the Masters, where she is a regular participant, I began collecting her work for myself (if you can call two pieces a collection). A typical Proctor piece is a female figure painted on a piece of reclaimed wood, embedded with a dense collage of recycled knickknacks and emblazoned with inspirational or autobiographical text. One of the pieces I own is a person made of vintage action figures – wrestler Randy Savage, some green Army men, a Star Wars tauntaun – called “There Live a Child in Me Want to Run and Play”; the other, “Amazing Grace,” is a woman wearing a dress made of old jewelry and wristwatches. Like most so-called folk artists, Proctor’s work is unconcerned with grammar and anatomy (my “Grace” has 11 fingers), but it exudes intense color and emotion. And I admire her Warholian approach of reproducing smaller, more affordable copies of her oversized iconic pieces – though her most epic work, a 200-plus-page “autobiography” on tin plates, is apparently off-limits to all wallets.

Crealdé School of Art’s executive director Peter Schreyer, who curated the show with pieces from Proctor’s Tallahassee home-slash-museum, says: “I’m not an art historian, but I’m very interested in pop culture, [and] have known Mary’s work for over a decade … [it’s] a great honor to bring her work to a historic African-American heritage site.” Schreyer feels confident the large assemblage of Proctor’s work – between Proctor’s privately owned pieces and those loaned by the Mennello, they’ve collected more than 30 pieces, though he isn’t positive how many will be in the final gallery installation – will be very popular with visitors. “The big deal for me and the community is that Hannibal Square will be hosting a noted Southern artist,” Schreyer says.

You can hear Missionary Mary speak at 7 p.m. Friday at Mt. Moriah Missionary Baptist Church, and meet her at the adjacent Heritage Center between 8 and 9:30 p.m. Proctor will also lead a community workshop on Saturday for residents and Crealdé fellowship students to create collaborative pieces that will remain in the center’s collection. All events are free to the public, thanks to grants from Orange County Arts & Cultural Affairs. The show runs through April 21, when it will be bookended by the third annual Hannibal Square Heritage Center Folk Art and Traditional Craft Festival, once again featuring the Florida Highwaymen and plenty of soul food.