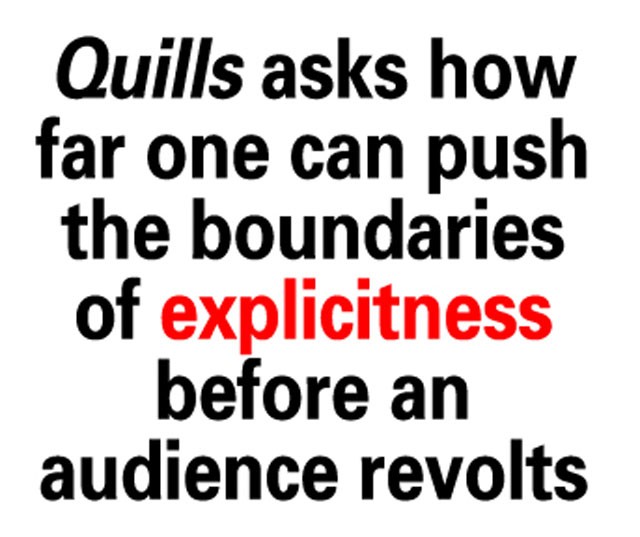 To research this column, I normally alternate between terrifying adventures – ziplines, zombies, Dragon Ball Z fans, etc. – and the relative comfort of the theater. This week I combined the two, thanks to a collaboration between one of Orlando's newest theatrical teams and one of its most unconventional venues.

Nearly 20 years ago, I was shanghaied into spending New Year's Eve at the Vault, the long-vanished Manhattan club made infamous in Madonna's Sex book; for an impressionable teen, it was an intimidating experience. I've had some small spectator experience with bondage, domination and sado-masochism (BDSM) in the years since. Still, I'll admit feeling more apprehensive upon approaching the Woodshed last Thursday night than I would riding any roller coaster. But I can't imagine a more appropriate atmosphere in which to stage a play about the man after whom sadism is named than an establishment dedicated to exploring the painful practice.

The Woodshed ("a private membership club dedicated to the practice of social nudism and the expression of the BDSM arts") wasn't nearly as scary as I expected. Located five miles south of downtown in an anonymous industrial park off Orange Avenue, the club isn't the dank dungeon I'd feared. In fact, the lobby looks downright ordinary, so long as you overlook the chrome phallus in the display case. In the main room, a high-ceilinged warehouse with a black dragon design painted on blood-red walls, bondage hardware dangles from the rafters. For what was planned as a one-weekend-only run (since extended through Aug. 16), the Woodshed hosted Holly Frost and Samuel Butcher's production of Quills. Doug Wright's 1995 black comedy (later a film starring Geoffrey Rush and Joaquin Phoenix) portrays the Marquis de Sade, a notorious 18th-century libertine who penned prose "so pornographic that it drove men to murder, and women to miscarry." Wright's graphic fantasia, set in pre- and post-revolutionary France, imagines the Marquis (boldly embodied by Brett Carson) swinging a metaphorical sword against Dr. Royer-Collard (Stephen Lima), the censorious administrator of Charenton insane asylum, where de Sade was imprisoned, with humanist priest Abbé du Coulmier (Bruce Ryan Costella) caught between them.

De Sade seduces a saucy seamstress (Kimberly Luffman), but when he sparks a riot among his fellow inmates he's stripped of his clothing and the right to speak. Written in the wake of conservative attacks on the National Endowment for the Arts, it was the author's intent (faithfully adhered to by director Butcher) to explore how far one can push the boundaries of explicitness before an audience revolts. The answer, based on the response of the small but supportive opening night audience, appears to be "really fucking far."

As stated above, the Woodshed is an ideal environment for an exercise in inducing discomfort, but that doesn't make it a good venue for proscenium-style staging. The bare-bones props and industrial floodlights were sufficient, and a soundscape of shrieks and stomps added to the haunted-house vibe. Unfortunately, a riserless seating arrangement resulted in obscured sightlines; a climactic scene set at floor level was invisible to anyone not seated along the center aisle. Some scenes were lethargically blocked, with actors shifting slowly from pose to stiff pose while shouting at each other.

Luckily, the trio of veteran actors was able to elevate the evening. Marion Marsh Skinner was vivacious and vicious in her too-brief role as de Sade's estranged wife, and Lima (despite a vaguely aristocratic affectation in lieu of an actual accent) imbued his self-righteous cuckold with a mix of pettiness and pathos. Carson – long respected locally as a comic actor – fearlessly exposed his considerable dramatic talents; his Marquis started out a buffoon, but burned with radical resolve once his garments were confiscated. The balance of the cast came across as somewhat unseasoned and too contemporary, by comparison. As the timorous priest, Costella initially appeared too milquetoast to be a credible foil to Carson, but as Coulmier became the play's protagonist, Costella compellingly cut loose with the crazy.