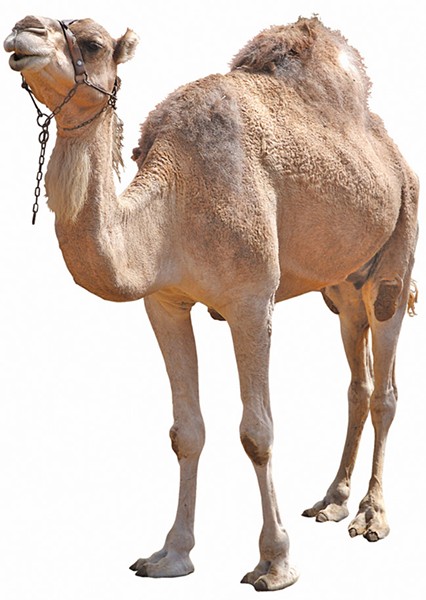 What is the responsibility of cultural institutions when exploring politically sensitive topics? How should the idea of “authenticity” be evaluated in an edutainment context? And what the heck happened to the kissing camel?

These were just three of the questions swirling around my head like a sandstorm after attending the Orlando Science Center’s quarterly Cocktails & Cosmos. I’d attended several of the adult-oriented parties in the past, so when OSC’s public relations director, Jeff Stanford, offered the invite, it seemed like an ideal way to spend a Saturday evening. Centerpiece of this Cocktails & Cosmos was the Orlando premiere of Arabia, the first Imax film – or indeed, film of any kind – shot entirely inside the kingdom of Saudi Arabia.

Our host for the screening was Hamzah Jamjoom, star of the film, who was given a warm reception by the near-capacity crowd. Jamjoom prefaced the presentation with some opening remarks that almost exactly echoed the interview I’d recorded with him the day before (which you can see for yourself on Orlando Weekly’s Culture2Go blog). A Saudi student who came to Chicago’s DePaul University to study film, Jamjoom started as a camera assistant on Arabia before the producers decided to promote him. The finished film, which Jamjoom narrates with British film legend Helen Mirren, focuses on his journey home and interactions with his family in scenes of “everyday” Saudi life.

Jamjoom comes across as personable and passionate in efforts to eliminate myths and “clear up misconceptions” about his homeland. And visually, the film is a stunning advertisement for the stark beauty of Saudi Arabia, from epic vistas of the vast deserts to breathtaking fly-bys of Riyadh’s ultramodern skyscrapers. But as someone with a lifelong interest in the complex culture and history of the region, some of the narration landed uneasily on my ear. I anticipated the pro-forma post-9/11 platitudes (“We’re not all extremists,” “We all want freedom to change”) but was taken aback by tidbits that could be interpreted as more insidious, such as this: “Visitors [approaching a Bedouin camp] would be asked ‘friend or foe?’ The answer could be a matter of life or death.” More troubling were oblique references to restrictions on women’s freedom, with repeated invocations of “the code of honor” and “modesty”; from a brief shot of Saudi women decorating their nails in bright colors, I suppose we are to infer that their subjugation isn’t as bad as we’ve heard.

Finally, in an effort to emphasize its thesis that Arabia is entering a “third golden age” of scientific advancement (thanks to massive new technical schools seeded with royal oil money) the film fudges evidence of an earlier golden age of Islamic enlightenment. It’s true more Westerners should know about 11th-century optics pioneer Ibn al-Haytham.But ahistorically anointing the Persian as an Arabian proto-Newton is a stretch, and fits into a pattern of appropriating ideas from conquered cultures (Indian, Zoroastrian, African) and rebranding them as uniquely Islamic Arab achievements. And then there’s the film’s odd assertion that Islam was the “catalyst” responsible for the Renaissance, when Europe’s intellectual explosion didn’t extend beyond Italy until after the Moors were expelled from Spain.

OK, so I’m an arts observer, not a film critic, and the movie was a travelogue, not a muckraking exposé. I wouldn’t expect an Imax movie about my home state, New Jersey, to center on Camden’s slums. But the unease I felt exiting the film was only intensified by the party upstairs. Again, authenticity is in the eye of the beholder – but the blond, blue-eyed dancers of Orlando Bellydance Performance Company gyrating in spangled harem pants to bass-heavy Arabic hip-hop didn’t scream “traditionally Saudi” to me. Neither did the abundant alcohol,though the bars appeared to be the main draw for many of the attendees. At least the free hummus and grape leaves from Tony’s Deli were authentically delicious, if generically Mediterranean.

And the camel? Sir Gus, the friendly kissing camel cared for by the Bahia Shriners(the guys with the fezzes and midget cars) was supposedly there posing for photos. But he must have gone to bed early, because by the time I went looking, there wasn’t a dromedary in sight.

Instead, I made a late-night swing over to the Florida Tap Room, where Skill Focus Burlesque presented “Sci-fi Vixen” stripteases to a bar full of screaming fanboys – and fangirls. Skill Focus’ pseudonymous sirens (you may recognize several as local theater stalwarts), who recently sold out a superhero-themed show at downtown’s Blank Space, combine classical burlesque gestures with creative pop-culture costumes. Unlike the evening’s earlier events, there was nothing apologetic or artificial about this display: The spectacle of Mass Effect’s Commander Shepard shedding her space armor or Alien’s Ellen Ripley rocking face-hugger nipple pasties should fuel local fan-fic for years to come.