James Brown is gone, but if they ever crown the Hardest Working Musician In Orlando Show Business, John deHaas has to be in the running. 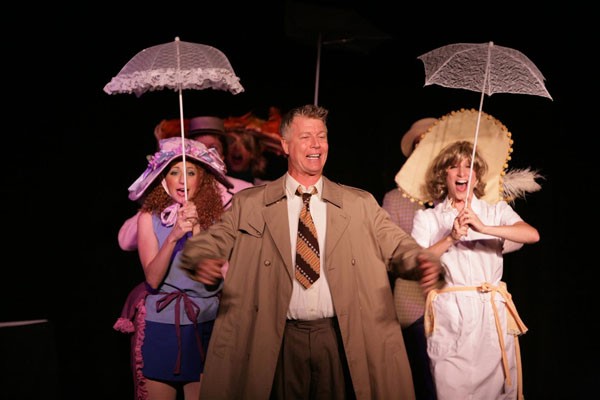 James Brown is gone, but if they ever crown the Hardest Working Musician In Orlando Show Business, John deHaas has to be in the running. Have you been to the Treasure Tavern dinner show near I-Drive? DeHaas is the music director there five nights a week. Seen Michael Wanzie’s production of [title of show] at the Parliament House? He’s the deadpan onstage keyboardist. Sung at Universal Citywalk’s Rising Star karaoke club? He probably backed up your baying playing the keys. If you’ve been to any attraction in town with a live accompanist, you’ve likely heard deHaas play.

So it’s no shock that Orlando’s most prolific freelance pianist has taken on yet another gig. This time, though, deHaas isn’t a hired gun. Instead, he’s calling the shots as the producer/writer/composer of Halloween: The Musical, a parody of John Carpenter’s 1978 screamer that’s carving out a two-night run at the Shakes this Friday and Sunday.

DeHaas’ show started with a rejection from the Orlando International Fringe Festival producer Beth Marshall. In 2007, with the All Hallows Fringe fundraiser approaching, John was inspired to pen a 10-minute mini-musical retelling of Halloween, a film that fascinated him with its terrors and plot holes as a kid. Marshall told deHaas that submissions had to be original works, not adapted. So deHaas put the idea in a mental drawer until he mentioned it during a conversation with Wanzie, who offered an October 2009 slot at the Parliament House’s Footlights Theater. Despite the fact that he hadn’t written the show yet, deHaas agreed. He used downtime during rehearsals for a cruise-ship gig to adapt his original screenplay, deHaas says, and compose a score for piano and cello (his first time writing for that instrument, with the aid of cellist Paul Leiner).

With director Douglas White of D-Squared Productions, deHaas staged six performances at the P-House. That initial production was exceptionally minimal, he says, and starred David Houde as the drag dopplegänger of Jamie Lee Curtis. (Heather Delmotte, an actual woman, plays Laurie Strode in the new production.)

The next step was the 2010 Orlando Fringe Festival, for which deHaas applied and received a United Arts grant. Unfortunately, the Fringe lottery landed him at number nine on the wait-list for the May event, and by March he decided to bow out and begin searching for another venue. DeHaas soon discovered that there aren’t many affordable independent venues in town. “Some wanted a ton of money ... some wanted to wait and see if their other clients [would book],” he says.

Salvation arrived via Jamie Mykins, the Lowndes Shakespeare Center’s operations manager, who discovered a two-day opening in the Margeson Theater’s calendar. DeHaas is enthused about the opportunity to work in the space, which he calls his ideal venue for the play.

Audiences wanting a foul-mouthed gore-fest should go elsewhere; like the original film, this show is restrained by modern horror standards. “I don’t think there are any bad words, [and] the goriest we get is [a victim] pulling out a red scarf when she gets stabbed,” deHaas says. Halloween groupies should get a kick out of seeing John Graham, who played Bob Simms in the original film, returning as the psycho psychiatrist Dr. Loomis, the musical’s narrator. Graham’s role has been revised to be less self-referential, but still gives the musical’s Bobby incessant acting advice, an inside joke that should tickle true fans.

Even if you don’t know the original flick, you can appreciate the range of musical styles on display in the score. Songs range from the Meatloaf “Bat Out of Hell”-inspired opening and a Music Man “Put on Your Sunday Best” spoof, to girl-group and Motown homages. And, as deHaas learned during his time with the Mama Mia national tour, “Every good musical ends with a mega-mix.” So even though the characters all die, he says they “somehow end up singing” an encore medley.

Maybe the biggest mystery is how deHaas gets away with this unauthorized adaptation. He’s reached out to Carpenter,  Halloween’s original director, and received a tacit nod of approval, but rights were sold to notoriously prickly producers, the Weinstein brothers, years ago. So far, deHaas is following a friend’s advice: “The best thing to do is do the show and wait until you get sued.” That hasn’t happened yet, but if you’re looking for deHaas and can’t find him at any of his many gigs, go check the nearest intellectual-property prison.