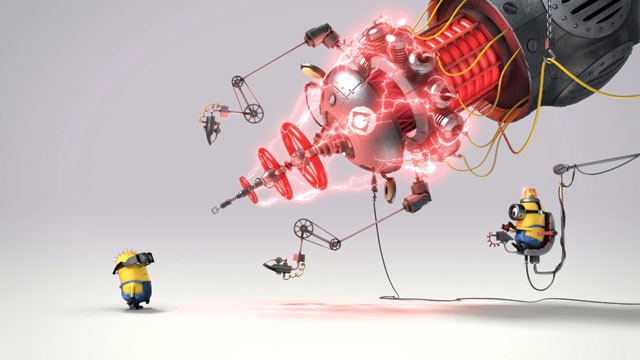 An aphorism among actors (apocryphally attributed to Edmund Gwenn) posits, "Dying is easy, comedy is difficult." That goes double for theme parks attempting to inject humor into their thrills. It's simple to stoke screams with extreme speeds, or evoke awe with aerial explosions. But provoking genuine joy among attraction attendees is extraordinarily difficult. While some Disney shows (like Epcot's The American Adventure) make me teary every time, only MuppetVision 3-D still makes me smile after repeated viewings. So I'm happily surprised to say I laughed out loud at Universal Studios Florida's new Despicable Me Minion Mayhem not just during my first ride, but my second, third and fourth go-rounds as well.

I came late to the Despicable Me party, only catching the 2010 animated feature on cable after Universal announced the new ride's spring debut. Even if it doesn't compete with Pixar's CGI classics, it's easy to see how the film landed (along with Shrek and its sequel) as one of the only non-Disney flicks among the top 10 animated box-office champs. Voicing the orphan-adopting übervillain Gru, Steve Carell invested his gift for goofiness in a character completely opposite to his Office persona, with unexpectedly heartstring-plucking perfection. While preparing for next year's follow-up, Carell and all the franchise's other creative principals (including directors Chris Renaud and Pierre Coffin) reunited to create a ride that honors both the absurdity and emotion of the original.

Guests can't miss the facade of Gru's cartoonishly creepy house, which now greets visitors as soon as they enter the gates of Universal Orlando's original theme park. The characterless soundstage that once held the Jimmy Neutron attraction has been overwhelmed by a platoon of Gru's yellow midget Minions, who cling to fake propaganda posters on the walls. Once past the (not air-conditioned) exterior queue, a pair of pre-show holding rooms indoctrinate inductees into an unglamorous new existence: We've been unwittingly recruited to join Gru's army of henchmen, who have a hard life, judging by the painfully funny experiments we witness them being subjected to in the instructional safety video. (Though it's comforting to know our 3-D glasses "are guaranteed to last five times longer than the person wearing them.")

Soon, we're welcomed into Gru's living room – lovingly appointed with hand-painted wallpaper, freaky family portraits and sly sight gags – and then into his imposing laboratory. A second warm-up sequence, shown on super-sharp screens disguised as observation windows, introduces Gru's adorable wards Margo, Agnes and Edith. The precocious prepubescents are in charge of our transformation and training to join the Minion masses; resistance is futile, lest Gru fry us with his dreaded Fart Gun.

By the time they enter the actual ride chamber, long-time Universal visitors will have realized that Despicable Me is actually a redressed revamp of the same simulator system that's been shaking riders around since The Funtastic World of Hanna-Barbera opened with the park in 1990. While the changes to the bucking benches guests buckle into were largely cosmetic, the screen has been enlarged and enhanced with hi-def 3-D projectors. The result is a rollicking, but not excessively rough, tween-friendly ride though Gru's subterranean lair. Even the smallest or most sensitive can enjoy the show with stationary seats in the front row, and all ages appear to enjoy grooving with costumed characters to "Boogie Fever" in the post-ride disco dance party.

Universal is anticipating attention for this capstone in their "Year To Be Here" summer marketing campaign, but some unexpected demolition in the neighborhood may steal the spotlight. During last week's press preview I pestered Universal Creative's Mike West on the future of Soundstage 44 (former home of the long-closed Hercules & Xena show) which was recently torn down after sitting dormant for almost a decade. His entertainingly evasive answer: "Just airing it out, letting some light in."

My money is on a year-round haunted house, but fanboys are foaming for Transformers. After experiencing the brand-new Michael Bay-approved robots-in-disguise adventure at Universal Studios Hollywood last month, I can't imagine fitting that multistory masterpiece of mind-blowing metal madness into USF's available footprint. And while the ride's intensity and immersion have been amped up to 11, its story beats and ride system are too similar to Island of Adventure's Spider-Man to comfortably coexist at the same resort. For the foreseeable future, you'll need to fly west to meet Bumblebee and Optimus Prime in person.