Evidence of the alien invasion at OMA and Mother Falcon 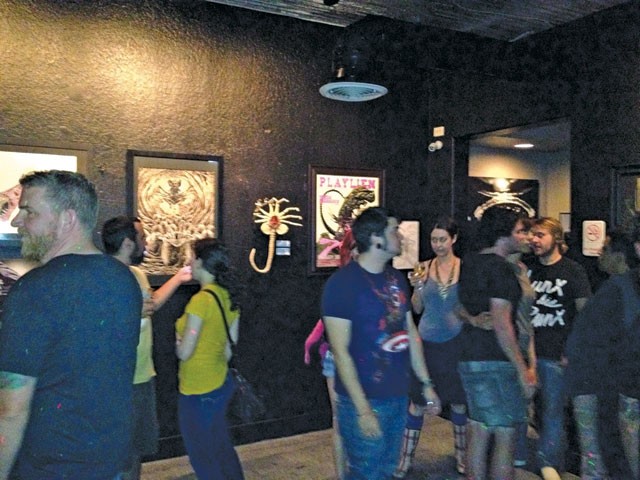 Two issues ago, in a column chronicling my adventures with the Big Nazo monster puppet troupe, I issued an alert for what I assumed at the time was the opening advance of an alien invasion. Today, I offer an apology for my error, because it appears that the aliens are already among us, and have been for some time. So, with a friendly salute to our benevolent visitors from regions beyond, I present two case studies proving the existence of extraordinary emigrants in our midst.

It's been many moons since I made it to one of the Orlando Museum of Art's 1st Thursday parties, but then I heard that June's Francophile: All Things French would pay tribute to some exotic planetoid called "France." Since all references to the place were Sharpie'd out of Florida schoolbooks sometime during the Bush administration, I rented a documentary on the region called Midnight in Paris. Apparently, the populace spends all its time walking in the rain, drinking heavily and time-traveling with Ernest Hemingway.

Anna McCambridge-Thomas, chair of the event, told me she wanted to bring the feel of Montmartre into the museum, and based on my extensive research (cited above), I think she succeeded. It started with Loch Haven's perpetual PITA parking situation – just like Paris – and the steady drumbeat of rain – again, just like Paris. The snaking line of several dozen umbrella-sheltered patrons waiting in the wet to enter the museum formed a particularly Parisian picture and was also an early sign that this was to be one of the better-attended 1st Thursdays I've been to.

Inside, College Park bakery/café Les Petits Pleasures started things off sweetly with a selection of delicate pastries and quiches arranged in colorful rows. Naturally, beer and wine were on hand to wash the calories down. Just off the main lobby, a gallery was hung with French-inspired artwork. And because you can't have Paris without performers, the Glazer Trio (led by Benoit Glazer, musical director of Cirque du Soleil's La Nouba and host-proprietor of the Timucua White House), Emotions Dance and poet Logan Anderson were on hand to provide entertainment.

Conclusion: Though there is anecdotal evidence that these "French" beings may mutate into cheese-eating frogs, they've got good taste. Verdict: Mostly harmless.

Only 48 hours after my last alien encounter, I was alerted to the imminent invasion of the Thornton Park area by some extremely lethal xenomorphs. The landing location, codenamed "Mother Falcon," turned out not to be a sibling of the Aluminum Falcon (Google it) that blew up the Death Star, but rather a pocket-sized bar and art gallery adjoining a custom T-shirt shop. In any sane society, the sight of interstellar certain death would send citizens screaming into the streets, but here in Orlando we treasure our terrors. How else to explain the sizable crowd spilling out onto the Washington Street sidewalk, straining to get a glimpse of H.R. Giger-inspired gore generators?

In case you aren't up on your seminal sci-fi, last Friday's Alien-focused art show was Mother Falcon's homage to the enduring film franchise that Ridley Scott inaugurated in 1979 and recently returned to with the sort-of-prequel Prometheus. (A respectful aside: Don't allow the middling review in last week's OW to dissuade you from seeing Prometheus, preferably on an IMAX screen; apart from some late-game logic lapses, it's a powerful blend of popcorn-tossing pulp and thought-provoking mythology.)

There must be an oversupply of talented Alien fans in Orlando, because the call to artists yielded a couple dozen witty and well-wrought homages to imagery from Scott's masterpiece and Jim Cameron's pulse-pounding sequel. Fortunately, I didn't spy any shrines to Winona Ryder (somnolent co-star of the quirky fourth film) or references to the wretched Alien vs. Predator spin-offs.

Between the life-sized facehugger sculpture (hung with a small sign saying "Do Not Molest") and the Playalien magazine cover (featuring the queen alien in a bikini), it's hard to pick a favorite piece. But I especially adored Cake Marques' "More Fun With Our Friends" ("A Little Weyland Yutani Corp. Book"), a spot-on Little Golden Books satire with a comically chilling twist.

Conclusion: Orlando's citizens don't seem to grasp that the appearance of acid-blooded assassins is an occasion for alarm, not alcohol. Verdict: Game over, man!