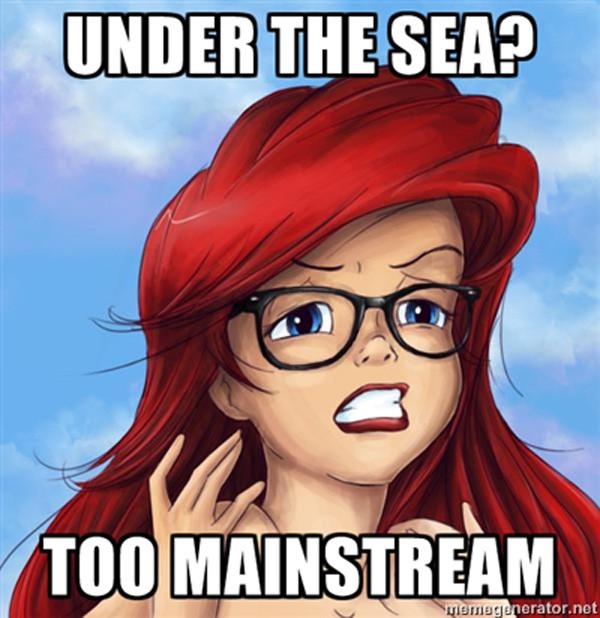 It's hard to believe, but a  quarter-century ago the Disney animated musical nearly became extinct. In the mid-1980s, then-CEO Michael Eisner began his tenure by reviving the Mouse House's faded live-action film department with adult-oriented hits like Splash and expanding its stagnant theme parks. But the animation department, once the heart and soul of Mickey's empire, remained on life support thanks to spectacular failures like The Black Cauldron. Just when it appeared Disney's hand-drawn cartoons were done for good, a Danish damsel swam along and single-handedly saved the company's tail. The 1989 release of The Little Mermaid is credited with kicking off the "second golden age" of film animation, sparking a string of hits – Beauty and the Beast, Aladdin, The Lion King – whose critical and financial success was unrivaled until Pixar's rise a decade later.

Flash forward to today, when Disney once again needs Ariel to save its ass. On the West Coast, their much-derided Disney California Adventure Park is emerging from a billion-dollar makeover, a belated attempt to rectify the cost-cutting that crippled Disneyland's little cousin upon its ignominious 2001 opening. In Orlando, Universal's Harry Potter has been happily eating Mickey's lunch for the past year, having prompted an unprecedented 30 percent jump in annual attendance at Islands of Adventure (according to the recently released 2010 TEA-AECOM industry analysis) while WDW's market share declined.

At both American resorts, a major component of Disney's new battle plan is elaborate dark rides dedicated to their piscine princess. The Little Mermaid: Ariel's Undersea Adventure won't appear in Orlando until late 2012 at the earliest, when it debuts as the linchpin of the Magic Kingdom's revamped Fantasyland. But visitors have been flocking to Anaheim in droves since the ride's June 3 premiere, regularly resulting in hourlong lines. You can't drive on a freeway or turn on the television in Los Angeles without seeing a billboard or commercial advertising the new attraction. Disney's reps have been extolling it on the Internet as the modern-day answer to the classic Haunted Mansion, and the ride is rumored to have cost in the neighborhood of $100 million, putting its budget on par with Universal's blockbuster Harry Potter and the Forbidden Journey robocoaster.

So, what does such a massive amount of money and hype buy you? As a die-hard Disnerd (and co-author of an upcoming book about Disneyland) I flew west last week to find out for myself. Sadly, I can't recommend you do the same, unless you enjoy being underwhelmed. At the risk of being a bigger witch than Ursula, I say this is one fish you may want to toss back in the sea.

Before I bash our seashell-bra-clad star,I'll start by praising what works. For starters, the ride is a sorely needed addition to California Adventure's uneven attraction lineup, which boasts a bevy of off-the-shelf carnival rides but only two other family-friendly indoor adventures. Running time is a solid six-plus minutes, a healthy length by modern standards (though anemic compared to Disneyland's 15-minute-long Pirates of the Caribbean). The film's beloved musical score by Alan Menken and the late Howard Ashman is well-represented, with the songs "Part of Your World," "Poor Unfortunate Souls," "Kiss the Girl" and of course "Under the Sea" all prominently featured with the original vocal performances intact. That last song gets an especially elaborate treatment, with a showstopping celebration starring Sebastian the Crab and dozens of plastic pals. And the ultra-efficient Ominmover ride system keeps the long queue moving swiftly.

But, while colorful and kinetic, Little Mermaid is ultimately uncompelling, comprising technological hits (the enormous undulating Ursula animatronic is awesome) and massive misses (Ariel's semi-synchronized lips look badly Botoxed). Some sections are stunningly detailed, while others seem unfinished. Worse, the storyline's second half is severely shortchanged, with the villain's demise a backgrounded  afterthought.

The ride's real failure is one of perspective. Walt's original attractions put the guests in the protagonist's shoes; you never saw Snow Whitein her Scary Adventures because you were living the story through her eyes. Imagineering went overboard reusing the "you're on a tour when something goes terribly wrong" plotline in everything from Star Tours to Expedition Everest, but all great Disney rides are first-person experiences. Little Mermaid, by contrast, is purely passive, with the guests merely outside observers. I rode once with Steve Barrett, author of the best-selling Hidden Mickeys guidebooks, and we both derived more fun looking for the secret three-circle symbols than from the attraction itself.

There's still time for Disney to correct their missteps before Ariel arrives in Orlando, and the film-accurate castle facade being built for the Florida version is a good start. But anyone who thinks this fishy female is a boy-wizard-beater better think again. We'll have to wait until Cars Land opens next year in California for the next true Disney E-Ticket experience, because this damp dame is a disappointing D-minus at best.