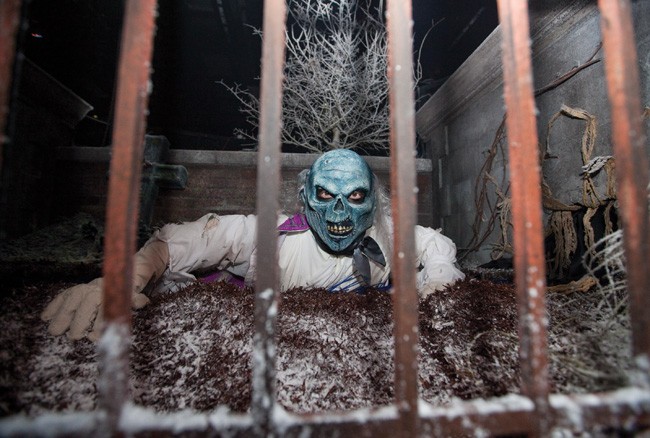 Just like that sinister seven ofspades that always seems to show up when I hit on 15, Universal Orlando’s Halloween Horror Nights (“HHN” to its gore-crazed fans) has returned again to haunt the all-hallows season. On Sept. 23 I braved the 21st edition of the popular annual event, facing stinging rain, tables of severed flesh and ravenous creatures – and that was just the VIP media reception.

If you’re expecting signature scares from previous years like Jack the Clown and the Chainsaw Drill team, you’re out of luck; this year is a reboot to launch the event’s third decade. But though the overall event isn’t as thematically integrated this year, the houses’ decor and effects have reached a new peak. The environments and apparitions in this year’s mazes seem more imaginative, more innovative, more ear-shatteringly loudthan ever before. The only kudos I can’t bestow is “scarier”; until Universal reinvents the way they conga-line the crowds (or at least 86 the flashlight-waving attendants shooing you along), I’ll continue to shrug my way past the predictable startles.

Here are my personal superlatives for HHN21 (and a couple of “golden turkeys” for good measure), based on my opening night experience. Keep in mind that the event might evolve over the month-long run, so your screamage may vary.

The three houses inside Universal’s soundstages are always the most immersive, but this take on a traditional graveyard sets a new standard with frigid air and actual falling snow. Watch for the corpse crawling out of its grave and a forced-perspective vista of the necropolis.

John Carpenter’s 1982 The Thing is one of my all-time favorite films, and Universal’s 2007 Thing-themed maze was tough to top. But this version does it one better, placing you in the middle of an Antarctic assault by icky alien atrocities. Here’s hoping the soon-to-be-released prequel is half as visceral as this maze.

The trenches of World War I were a real-life horror show, so it’s almost surprising that Universal hasn’t built a haunt around them before. The claustrophobic dirt-and-barbed wire maze filled with deafening gunfire and banshee nurses is freaky enough, but seeing a doughboy get torn in half at the waist, leaving his severed legs standing without the rest of him, is a sight I won’t soon forget.

Most Literate: Nevermore: The Madness of Poe

It isn’t often that AP English comes in handy at Halloween, but observant readers will spot nods to The Pit and the Pendulum, Annabel Lee, The Masque of the Red Death, The Cask of Amontillado and more of the macabre author’s creations. Most frightening of all: the prosthetic foreheads worn by the Edgar Allan impersonators, making them all look like the hydrocephalic rat from Pinky and the Brain.

Ever walk the Spanish fort queue at Disney’s Pirates of the Caribbean and think, “This would make a great haunted house”? The designers of this voyage through Columbus’ ill-fated fourth ship apparently did. From the awe-inspiring sails to the wickedly tilted lower decks, this maze has an eerily authentic sense of space and scale, though scares were scarce.

Trippiest Visuals: The In Between

Past haunts have used 3-D glasses with limited success, but this interdimensional expedition (via Ouija board) hits it out of the multiverse with mind-mangling colors that literally leap off the walls. Watch your alcohol intake; this crazy kaleidoscope can send even sober heads spinning.

Last year’s popular steampunk scarezone returns as a humid shuffle through a rusty human-filleting factory. As if the exposed sinew and smashed viscera weren’t appetizing enough, you can expect to be spritzed with an array of unidentifiable fluids. Hint: Keep your mouth closed.

This blackly comic twist on 4th of July, Arbor Day and other holidays boasts lots of clever detail, like the “other white meat” trussed up on the Thanksgiving table. The “humor” house is usually among my favorites each year, but I was rushed past the video loops that set up each environment, making this one a frustrating exercise in “huh?”

Patrick Braillard and Jason Horne (PB&J Theatre Factory) are two of the funniest guys I know. But aside from some sharp political jabs, the pop-culture spoof they’ve created, taking over from longtime writer Mike Aiello, is the most toothless in years. Next year, either ignore the libel lawyers and cut the dance routines, or just retire the time-traveling phone booth for good.