Where does a bad Jew go during the Christmas season? The Holy Land Experience, of course! 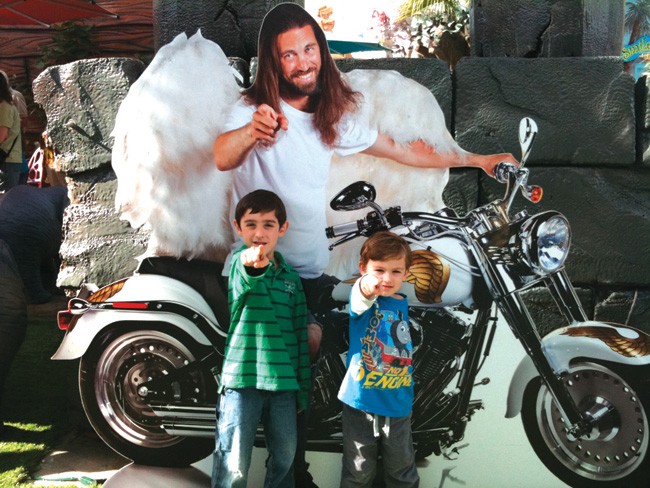 Here’s a Christmastime confession: I’m a bad Jew. Sure, I’ve got all the Semitic signatures – prominent proboscis, nearly unpronounceable name, lifelong love of lox and bagels. But when it comes to orthodox observance, I’m strictly a Yom Kippur and Pesach participant (that’s akin to being an “Easter and Christmas Catholic”). So, where in Orlando can a semi-agnostic, super-secular member of the tribe turn to during this season of spirituality? Why, to the Holy Land Experience, of course! (A quick HLE primer: Holy Land Experience is the Christian mini-theme park near the Mall at Millenia, originally founded by messianic Jew Marvin Rosenthal for the express purpose of convincing his fellow Chosen People to choose again and pick Jesus. HLE is now owned by Trinity Broadcasting Network, purveyors of “prosperity gospel” televangelists like Joel Osteen.)

Yes, I’ve done this schtick before, sort of. My 2009 visit to HLE was on the occasion of the attraction’s annual “free admission day,” a legally mandated open house held to maintain their tax-exempt status (granted because they exhibit biblical manuscripts). That event was such a madhouse – with mounted police, hovering helicopters and hordes of pseudo-pilgrims turned away at the overcrowded gates – that I barely made it inside before day’s end.

Last week, I was invited to take my first in-depth tour of HLE since 2004. Upon arriving, the first thing that struck me – as it did on my first trip – was how nice everyone is. Guest relations representative Jane Wilcox, a smiling, grandmotherly type with a charming British accent, showed me around and didn’t even blink when I let slip my non-saved status. Every other employee I encountered appeared ultra-enthusiastic, even by Disney standards, greeting me with a hearty “Have a blessed day!” They’re so insistently friendly that if I didn’t know better, I’d think they were Mormons.

The second thing that struck me was how well-executed HLE’s scenic design is. The re-creations of first-century landmarks were crafted by ITEC, who also built parts of Islands of Adventure. It’s what I imagine Epcot’s Israel pavilion might have looked like if security fears hadn’t scuttled that proposed expansion in the 1980s.

The third thing I noticed was how small HLE is. At only about 15 acres, you could fit it inside any of the Magic Kingdom’s themed “lands” with room left over. Walking around the entire facility takes less than 15 minutes – and don’t worry about long waits for the rides, because there aren’t any. Unless your kids are seriously ga-ga over God, you’ll have trouble keeping them busy here. I brought along a friend’s children as test subjects: They had fun in the pocket-sized play area (populated with surreal stand-ups of Satan and of Jesus on a motorcycle) and were compelled yet creeped out by the crudely animated Jonah in the Whale diorama. But after an hour, they were bored silly and begging to leave.

Adults, on the other hand, can fill a day seeing the numerous new live shows that have been installed in recent years. Though the scripts are overwrought and offer theologically tenuous interpretations of ancient Jewish history (Jesus is a Gentile, but Caiaphas and Saul have Borscht Belt accents?), I’ll stack the thespians of HLE’s Century acting ensemble against the actors at any local attraction. Not only do they each perform more than a half-dozen unique shows daily, but most are called on to deliver gut-wrenching, tear-stained soliloquies; not the usual theme-park fluff. You might even recognize a few from local legit stages; I spotted Scott Browning, a fixture at Art’s Sake Studio, snoozing in the garden of Gethsemane. I especially appreciated the production values in “Forgiven,” “Legna” and “Why I Love Him – Four Women Who Loved Jesus” – if only more local stages had sound and lighting systems as slick as HLE’s Shofar Auditorium. Of course, the newly revamped Passion drama is still the primary draw, with Centurions kicking the holy crap out of Christ (a family viewing area thoughtfully shields young believers from the copious gore) and a spangled Second Coming encore.

There are still too many moneychangers in this temple ($8 for a reheated Chick-fil-A sandwich?!?) but I had a better-than-expected experience among the faithful. If you aren’t blessed enough to find the $35 admission fee in your budget, you can attend Sunday morning services for free or a Friday night taping of TBN’s Praise the Lord inside the glitzy new Temple of Nations theater (think Vegas meets the Vatican). Or just drive by after hours for a look at their outdoor displays of holiday lights and hideously out-of-scale Nativity-scene animals. Just tell Jesus that the Jew sent you.