Seth kicks off the season of getting with a trip to IAAPA, the world's biggest walk-through wish book for theme-park geeks 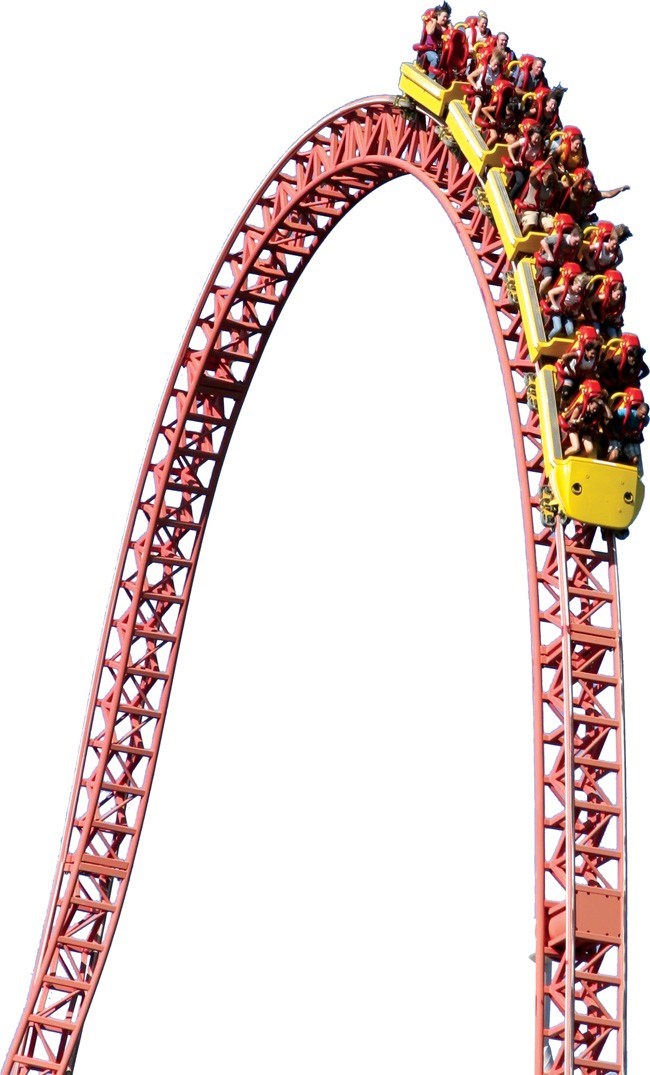 I’m ready to launch into the holiday season, which really means one thing: loot. Lucky me, I recently attended the world’s biggest walk-through wish book for theme-park geeks. From Nov. 14-18, the annual International Association of Amusement Parks and Attractions expo drew more than 25,000 attendees to the Orange County Convention Center, forming a funfair that completely engulfed the cavernous North/South Building.

If you’ve never attended, it’s hard to imagine how massive IAAPA’s meetup of ride-makers and treat-bakers has become; picture the Central Florida Fair times 50, and you’re halfway there. I spent almost four hours power-walking the expo floor’s mile-long alleys, only stopping to examine the most interesting displays; I still couldn’t see everything inside, much less the outdoor areas. But even at a brisk pace, I was able to pick up on some potential trends that may turn up at area attractions, along with a few outliers I hope might make it into the amusement mainstream.

Even though IAAPA reported a 3 percent attendance increase over 2010, the convention center’s midway seemed slightly diminished. While there were still plenty of seizure-inducing light displaysand towering inflatable creatures, I missed the massive indoor rides, most of which moved outside. Zamperla, which demoed drop tower rides on the floor in years past, had a fairly dull booth this time, as did coaster builders Bolliger & Mabillard and Maurer Söhne. And I wasn’t brave enough to try the Fishpipe, a giant spinning human hamster ball filled with water that I can only compare to an industrial washing-machine simulator.

Real thrill rides may have been scarce, but virtual ones were abundant. At past expos I noted an explosion of 3-D; this year, the coolest 3-D demo on the floor came courtesy of local firm Crunchy Logistics, which showed me the home entertainment holy grail: my first glasses-free big-screen 3DTV. The resolution is still a little low, but it really works, even with multiple viewers. With a little work, this could be the future of your living room.

However, three dimensions apparently aren’t enough anymore, as Triotech was promoting “the world’s first 7Di” virtual interactive dark ride, and I saw at least one poster promoting “9D.” I’m not sure I have enough eyes for that. The best multidimensional joyride I sampled was Alterface’s Desperados 5Di, an upgrade of the ride-slash-game I enjoyed a couple of IAAPAs ago. It was still a rough prototype, but any day I get to shoot 3-D zombies in the head is a great day.

Speaking of zombies, there were two standouts among the haunt suppliers. Scare Factory combined dozens of its animatronics into a horror-themed shooting gallery that genuinely made me jump. Even scarier were Pale Night Productions’ high-tech haunted house props; I wish I’d closed my mouth before that guy’s head exploded 2 feet from my face.

While such arcade attractions may show up at small stateside entertainment centers, there was little on display for our local megaparks. The most impressive life-size coaster cars on the floor were bound for California (Mack’s Manta for SeaWorld San Diego) and Australia (S&S’s Green Lantern for Warner Bros. Movie World). Mostly, IAAPA made me want to hop a plane to Europe, where Mirabilandia, Legoland Billund and Europa-Park are getting wild new coasters and multimover-maker ETF is installing dark ride vehicles that travel sans tracks. Then I’d continue to Asia, assuming China’s Fantawild and OCT East parks are as cool as their IAAPA model makes them look. And while there, I’d be sure to check out the Transformers ride Universal Studios Singapore is about to unveil. If it’s really all it’s being hyped as, I may have to forgive Michael Bay for his cinematic abominations.

After my globetrotting trip, one thing is sure to bring me back to America’s amusements: the food. Fried fatand sugar-coated sugar is the real carnival come-on, and IAAPA’s endless edible samples are no exception. After decades of apathy, I was finally won over by Dippin’ Dots’ new freeze-dried cappuccino crumbles, and Robofusion ice cream drew a crowd with its sleek (but slow) synthetic sundae maker. But the big winner at this year’s IAAPA was the Keystone state, thanks to offerings from Pennsylvania stalwarts like Snyders of Hanover, Rita’s Italian Ice and Philly Pretzel Factory. The hot handouts from the latter (complete with several varieties of spicy mustard) were the best taste of the Northeast I’ve found in Orlando – at least until next year, when we’ll get the area’s first Wawa convenience store. Now that is the 2012 attraction whose opening I’m anticipating the most.