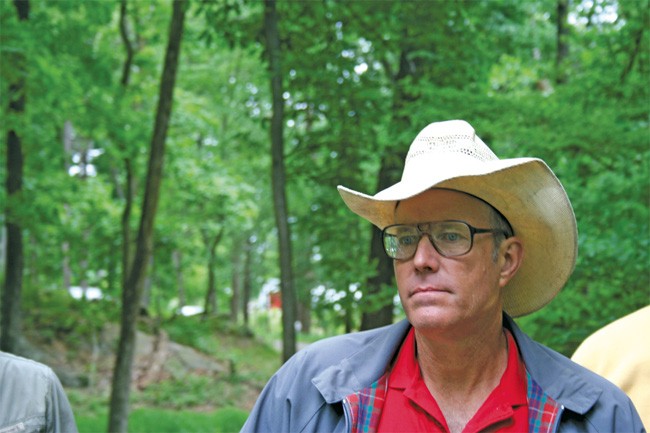 Folks, This Ain't Normal: An Evening With Joel Salatin

Spoiler alert: I'm going to give away farmer-author-speaker Joel Salatin's whole presentation. Ready? The modern centralized industrial agriculture model is unsustainable and we are rapidly approaching the point at which we either adopt healthier, less petrochemical-dependent methods of farming voluntarily or we'll be forced to adopt them as part of a global health catastrophe.

This concept and Salatin himself, who is in town to promote his new book Folks, This Ain't Normal, should both be familiar. Salatin's beyond-organic Polyface Farm in Virginia is featured in the documentary Food Inc., and he's presented as the hero of Michael Pollan's bestselling book The Omnivore's Dilemma. If you've paid any attention at all to food production in the last 20 years, Salatin's sermon about how we're separating ourselves from “the ecological mooring of our umbilical” will be a rerun. Salatin urges more people to enter the world of sustainable agriculture, with smaller farms growing organically in more geographical areas, and advocates for the elimination of regulations that keep people from buying directly from their local farmers – a message so simple one marvels that anyone would fight it.

So why am I so excited to hear him preach?

“I do not apologize for talking to the choir,” says Salatin from his home. Polyface Farm, which raises a variety of meat animals through mostly natural grazing, has become his proving ground for the sustainable techniques others in the movement call for. “I give the convictional soundbite to the choir so that they can talk to their friends and family without doubt or hesitation.”

Condensed soundbites might seem an odd contradiction for a man who stretches his title to “Christian-libertarian-environmentalist-capitalist-lunatic,” and it might seem too easy just to go hear someone say things you already think. But he doesn't let the choir off the hook just because they agree with him. “There's a feeling of victimhood, that the problems are so big and the issues are so broad … this is a call to participate,” he says. “So many of these issues that are talked about … most of the people doing the talking don't make a living at it. They don't make earthworms dance.”

Each of us will be going to hear what we want, whether that's validation for abandoning the traditional career path to join the organic-farming movement (as I did … twice) or simply to see this message get greater exposure. “I'm grateful that Joel's visit will allow more residents to understand how the ‘novel' technology of genetically modified and factory farming is truly dangerous to the health of our country, and for them to make links with our local farmers,” says Emily Ruff, partner in the Homegrown food co-op and one of the organizers of Salatin's appearance here.

And still others see his work tied to what might appear to be disparate disciplines. Bruce Stephenson is the director of the urban planning master's degree program at Rollins. He is also one of the event's organizers. “Growing food was a staple of urbanism a century ago; it will be a staple in the future,” Stephenson says.

Salatin believes it's a good thing all these ideas are going to be in the same room. “Part of where our culture has gone wrong is that what it has become is totally segregationist,” he says. He says too many people divide up the social issues and the agricultural issues without realizing they're connected.

So Salatin, a naturally funny and personable English major, will tell an “extremely practical story … to make the philosophy live.” He'll offer a few alternatives to what he calls the “non-scalable regulations” that hold back new farms and tell a few anecdotes about farm life. He calls this not a lecture, but a performance.

“I want it to be enjoyable so that, even if someone comes and totally disagrees with everything I have to say, he can leave saying, ‘I'm glad I came.'”