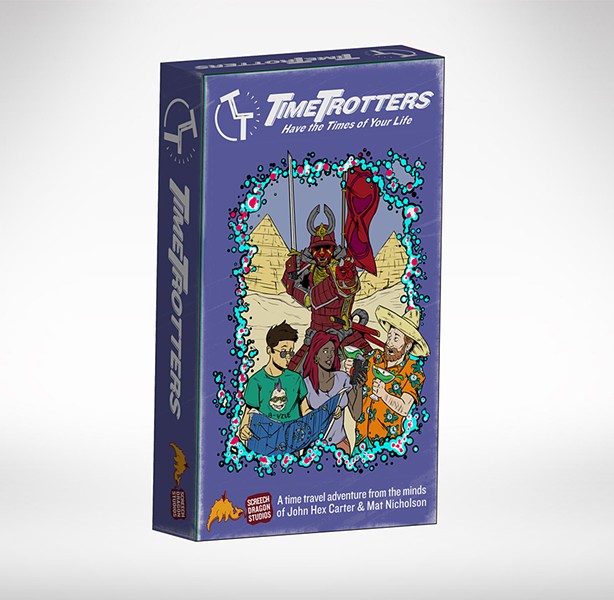 Games don't always occur on a field or get broadcast in prime time. Sometimes the best ones take place in the middle of the afternoon on your friend's coffee table. Or every Wednesday night at Cool Stuff Games in Maitland (8500 S. U.S. Highway 17-92, Maitland). "It's nothing formal, just whoever can make it out makes it out," says 33-year-old web developer John Carter. "Most of the time we test play each others' games, and sometimes we try out other games." Carter, with partner Mat Nicholson, has been refining a board game he designed, TimeTrotters, with groups of like-minded game enthusiasts for over a year.

Independent board games have seen an explosion in popularity in recent years, and that's fueled an equal explosion of games. Sites like Kickstarter and IndieGogo have leveled the playing field for designers who want to get a game out to a public willing to pay for it. Meanwhile, review blogs and gaming shows like TableTop have proliferated on the Web, finding an audience eager for help separating fun, well-designed games from confusing, boring games. That's where playtesting comes in.

For Carter's TimeTrotters, each player plays a persona looking for specific souvenirs during a trip through time. It wasn't until several rounds of actually playing the game with people that Carter noticed something wasn't quite right: "There was an issue where the personas didn't really fight for souvenirs: The Drinkologist had his drinks, the Weapons Nut had his weapons, and so on," he says.

The playtesting group suggested that the players should compete for the quality of the item as well. "So now we have personas like the Hipster, who wants anything handcrafted, or the Connoisseur, who doesn't care if it's a drink or a trinket as long as it's exquisite. Now that personas fight over souvenirs, there's a lot more interactivity between players, and that's a solution that spawned directly from the last event I went to."

After a year of tweaking the rules of TimeTrotters, Carter is looking for a publisher to work with to get the game out in stores. The first step on that journey is bringing the game to PrototypeCon, a convention for designers of unpublished games to playtest their games with representatives from game publishing companies and get valuable feedback or even land a deal. PrototypeCon takes place at the Ramada Gateway in Kissimmee Feb. 19-21, and is hosted by the Southern Unpublished Prototype Guild.

Even if he can't find a publisher through traditional means, however, there's always Kickstarter. Last year, over $84.6 million was raised through Kickstarter to fund tabletop games, more than twice the amount raised for video game projects. "The old gatekeepers for whether a game can get published, like Hasbro, are struggling to keep up. Meanwhile new names like Stonemayer Games and CoolMiniOrNot have come out of nowhere to have celebrated games that are also becoming very wealthy industries," says Carter.

And anyone dismissing the idea of a Kickstarter-funded board game becoming an unqualified success has only to look at the ubiquity of the black cardboard boxes popping up in every bar around town. Cards Against Humanity was one of the first Kickstarter successes, bringing in more than $11,000 over its $4,000 goal.