Locals lead an excursion through the work of William S. Burroughs 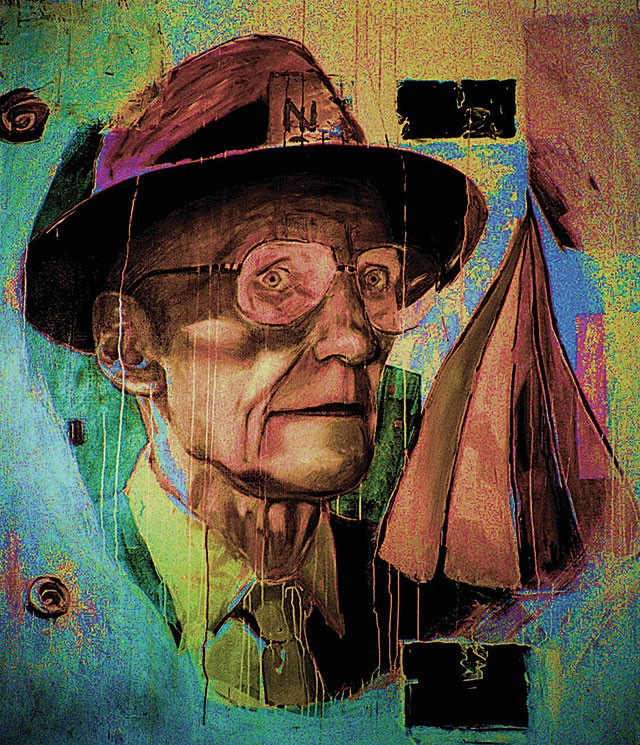 William S. Burroughs, the buttoned-up dean of American junk literature, purveyor of a caustic stream of nightmarish sex- and drug-fueled alternate realities, wasn’t actually much of a partier. To wit, this excerpt from an interview in the Paris Review, conducted on New Year’s Day 1965: “Firecrackers and whistles sounded the advent of the New Year of 1965 in St. Louis. Stripteasers ran from the bars in Gaslight Square to dance in the street when midnight came. Burroughs, who had watched television alone that night, was asleep in his room at the Chase Park Plaza Hotel, St. Louis’s most elegant.”

So Burroughs’ sardonic spirit (he died in 1997; 2014 is the centenary of his 1914 birth) may not be in attendance, then, at Nicholas Sellitto’s new production, Midnight Exterminations. Sellitto, who presents shows and events around town under the moniker Modern Music Movement, has stepped slightly outside his usual musical tribute formula to curate this selection of readings from Burroughs’ work. The “ambient dissections and excerpts” will be read by Megan Faubel, Patrick Greene and Christian Kelty, backed by original music composed and performed by Dana Fasano, Jim Ivy, Kris Gruda and Todd Elliott – all in all, a seasoned crew more than equipped to handle the creepily plausible surreality of Old Bull Lee.

The show takes over the stage at the Venue at midnight Friday and Saturday nights (or “12 a.m. to death,” as Sellitto puts it), after the Clandestine Arts production of Sweeney Todd clears out. (That a horror-musical celebrating the murderous barber of Fleet Street will give way each night to the words of a man who shot and killed his wife in a drunken game of William Tell is a nice bit of synchronicity.) Sellitto lays out the structure: “It’s in three segments: Each performer/orator gets 20 minutes, with music behind them. It starts out with the ’50s, acid jazz ... [the] next segment goes into sludge-metal, then an ambient segment to close the show.”

While the “orators” chose their readings, Sellitto has kept a tight control over the design of the show, picking the eras from which to choose literary selections and dictating the musical genre accompanying each reading. Fasano (Chopper Stepe, Potsie) and Ivy (a composer, improviser and member of the Civic Minded Five), with the help of Gruda (Crater Tater, the Hooba Hoobas) and Elliott (the Rules), have composed original music to flow behind and around each oration.

“Nick really didn’t even want to tell us what pieces they were reading,” says Fasano (who is also a graphic artist at Orlando Weekly). “He really is just taking all of these things and throwing them in the pot.”

That’s business as usual for Sellitto, whose local music bona fides include a stint at Murmur Records and a stretch of event planning at Sapphire Supper Club (now the Social). As Modern Music Movement, he puts on the annual Nashville South Lo-Fi Music Showcase, a smorgasbord of local and near-local alt-country, and has produced tribute shows covering the music of Neil Young, David Bowie, the Rolling Stones, the Replacements, the Smiths and many more in intimate venues around town including the Imperial, the Peacock Room and Elixir. A tribute to a writer may seem out of place, but Sellitto has long been a spoken-word fan, combing cut-out bins for CDs of Burroughs performing with Bill Laswell’s band Material, with the Disposable Heroes of Hiphoprisy and others.

Another show that will intrigue fans of the way-out happens 7 p.m. Sunday, Jan. 12, at the Space. (What is it with these nondescript, un-Google-able names; are the venues attempting to evade the NSA?) Percussionist Matt Roberts, last seen in 2013 bowing an amplified cactus with a feather at Silence 101, Gallery at Avalon Island’s celebration of John Cage’s 101st birthday, tackles David Lang’s Anvil Chorus and Frederic Rzewski’s Fall of the Empire (which calls for instruments including seedpods and lawnmower blades). Learn more at accidentalmusicfestival.com.