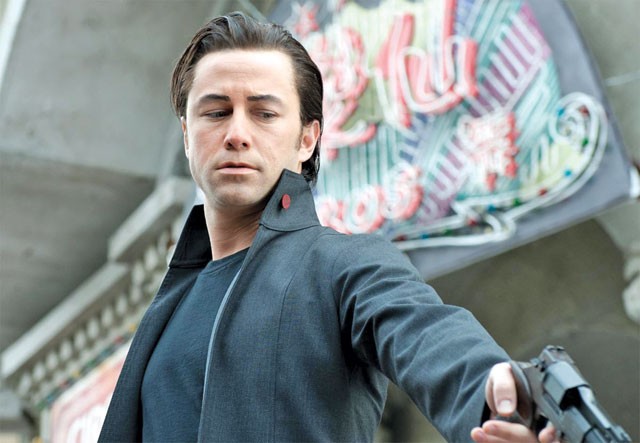 Joe is a dead man and he knows it. Hell, he signed up for it. 30 years in the future, where the income gap hasn't so much dissipated as become standardized to the point where the rich have fled to more stable climes, leaving the have-nots to fight amongst themselves for whatever table scraps are left, one way to make bank is become a "looper." The job description: Be at a designated place and time, wait for a hooded, tied-up victim and shoot him dead. It's a jarring, blink-and-you-miss-it exchange. Payment for the job is strapped to the victims' backs – silver bricks, or gold if you're closing your loop.

As Joe (Joseph Gordon-Levitt, star of director Rian Johnson's name-making debut, Brick) explains in voiceover that serves not to vomit exposition but to keep the audience focused on what's important – "If we talk about time-travel we're gonna end up sitting here drawing diagrams with straws," grumbles one character – and what's not, time travel hasn't been invented yet … but it will be 30 more years down the line. Future mobsters looking to get rid of their rivals' bodies send them back to be taken out by a looper. They're wiped off the face of the future map and some ruthless punks make some money.

Loose ends must be tied, however. You can't have a bunch of assassins who are overly familiar with time-travel hanging around after it's been invented. So, at some point, a looper will, hopefully unknowingly, kill his future self, giving him around 30 years to spend his gold and learn a foreign language or something.

Joe's not unaware of the problems this arrangement could bring up. In the first act, he attempts to shelter a fellow looper (Paul Dano) who has allowed his future self to run away. It ends gruesomely for both versions. So when Joe, confronted with Old Joe (Bruce Willis), hesitates just long enough for the elder to get the drop on him, he knows he doesn't have long.

There's a bit of a wait to meet Willis, but Johnson and Gordon-Levitt relish his build-up. Gordon-Levitt tries on a variety of classic Bruce Willis faces – a little Moonlighting here, a little Die Hard there – and Johnson eats it up with a shooting style that's alive with possibility and throbs with anticipation. When he arrives, we learn that he's on a mission: The future has been dominated, in quick and brutal fashion, by a mysterious man called "the Rainmaker." Willis knows where and when he was born, but not to whom, so he's left with the wrenching task of eliminating all potential Rainmakers. When young Joe locates the kid and warms to his self-sufficient mom (Emily Blunt), a showdown between the Joes is set into motion.

Johnson's brilliant move is to center his sci-fi around a basic human survival drama. His well-paced script rewards those inclined to track the futuristic angle with sensible twists and thought-provoking turns, but like last year's Source Code, there are also equally compelling subplots – a budding romance, rivalries, kids in peril and chases galore. Johnson regular Steve Yedlin's diverse cinematography is crucial to that effort, as is Gordon-Levitt's hard-bitten performance.

Over the course of three quality films in seven years, Johnson has made a high-school noir, a quirky caper and now a high-energy thriller. There's no telling what his next trick will be, but he's been highly vocal about his love for Annie Hall. If I may suggest a task at least as difficult as his others: saving the modern rom-com.