Wesley Slade is extraordinary as the Pinball Wizard 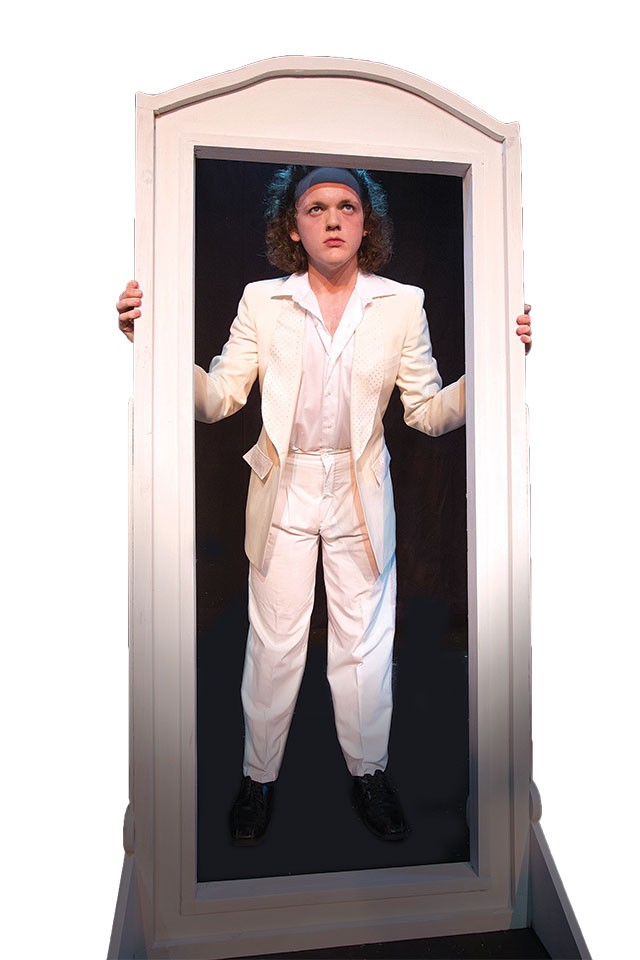 Whether you’re more familiar with Ken Russell’s 1975 film or the 1993 Broadway musical, the inscrutable storyline of The Who’s Tommy has remained largely the same since Pete Townshend penned the seminal 1969 “rock opera.” Capt. Walker (Arthur Rowan), presumed killed in action, returns from war to confront his young wife (Heather Kopp) and kill her lover (Sean Michael Flynn). The pair panic and persuade their son Tommy (Wesley Slade as adult)* that he “didn’t hear it, didn’t see it [and] won’t say nothing,” resulting in the boy becoming blind, deaf and mute (or “dumb,” as the un-PC lyrics put it). Tommy is alternately abused by his sadistic Cousin Kevin (Jake Mullen), alcoholic Uncle Ernie (Juan Cantú) and a gyrating Gypsy (Valerie Witherspoon), but shows no signs of sentience until led into an arcade, where he’s transformed into a “Pinball Wizard” and an international superstar.

Tommy’s book, adapted for the stage by Townshend with director Des McAnuff, butchers the original album’s religious commentary, downgrading Tommy from new messiah to petulant pop idol. But the Broadway cast – headlined by then-unknown Michael Cerveris, with Alice Ripley and Norm Lewis in the ensemble – delivered the classic rock score with uncommon authenticity for the pre-Rent era, and McAnuff’s effortlessly interlocking transitions prototyped the directorial style he later perfected with Jersey Boys.

Mad Cow’s production of The Who’s Tommy partially preserves the pleasures I remember from Broadway thanks to a strong central cast, especially the extraordinary Wesley Slade as the adult Tommy. Where Roger Daltrey played the role on film as hippie Jesus and Cerveris as a New Age Mormon missionary, Slade recalls a trickster shaman, bringing a puckish sarcasm to Tommy while mimicking Cerveris’ celebrated tone with eerie accuracy. Rowan and Kopp portray the Walkers’ frustrations with palpable power, making their bland ballad “I Believe My Own Eyes” sound better than on the cast album. Some featured performers don’t quite capture their characters, with the “Acid Queen” and “Sally Simpson” sequences falling flat, but as a whole the ensemble sounds solid, sending shivers up my spine when they sang the epic “Listening to You” ending.

While drummer Robert Walko delivers Keith Moon-worthy fills, keyboardist-musical director Heather Langs and guitarist Neal Faul can’t fill the original quartet’s remaining roles by themselves; without a bassist, John “The Ox” Entwistle’s essential contributions are lost, and eliminating the French horn (along with Tommy’s response to its sound) does major damage to the plot.

If this Tommy came from an unpaid community theater, I’d likely deem it adequate. But as much as I relished reuniting with Townshend’s tunes, Orlando audiences expect more from Mad Cow.

*[EDITORS NOTE: This review has been updated to correct an error in editing and an incorrect casting credit in the first paragraph.]