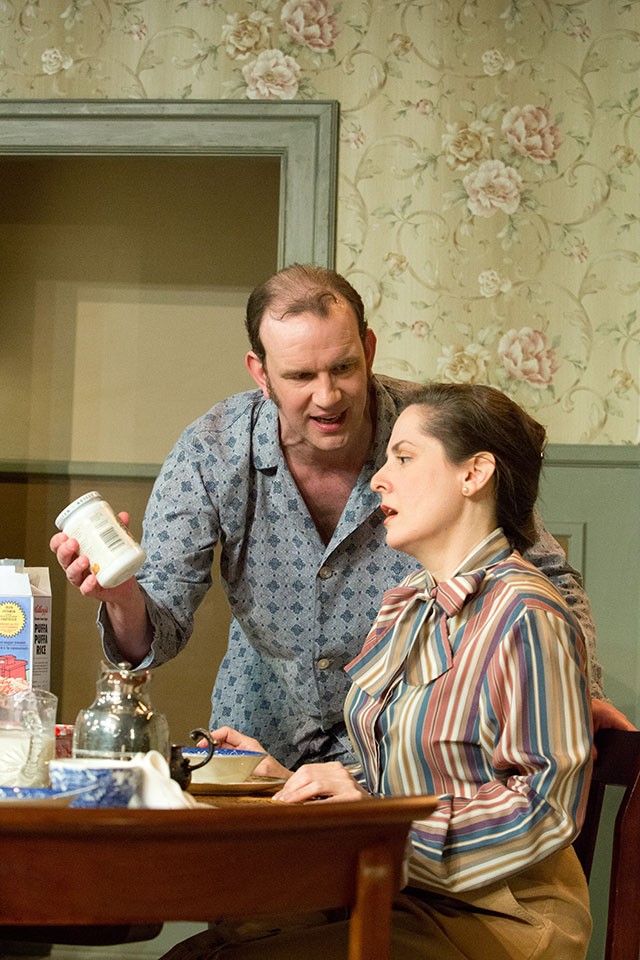 Prolific British playwright Alan Ayckbourn gave birth to something unique in 1973 with The Norman Conquests, a trilogy of plays about three siblings and their significant others set over one weekend at the family’s ancestral home. Though meant to be performed separately, the plays overlap, with the action of one taking place in a single setting while the events of the other two are occurring simultaneously in other locations.

Living Together and Round and Round the Garden are set in the sitting room and yard, respectively, leaving the dining room for Table Manners, the latest Mad Cow production. Though it is essentially a farce, it never reaches the absurd and actually has some serious stuff to say about sibling relationships and loneliness, all while serving up deliciously funny dysfunction and adultery, most of it courtesy of Norman, a “gigolo trapped in a haystack.”

Annie, the lone sibling still living in the house, is a frumpy fixer-upper who dresses in jumpers so often that her sister-in-law Sarah claims they must be “chiseled off her.” Annie is single but has a crush on Tom, the slightly dim next-door neighbor. Annie’s siblings are the snobby Ruth, who is married to Norman, and an insufferable but well-meaning git named Reg, who is married to Sarah. Separately, there’s not much to recommend any of the six; together, they are a familial Fawlty Towers.

American actors and audiences often find it difficult to embrace British farce without leaving it undercooked or in flames. Though director Dan Bright, in his Mad Cow debut, never shows us the play’s full power, he does a competent job with pacing (the biggest comedy killer) and blocking, which seems naturalistic and never too stagey, despite the limitations of a proscenium. (The play was meant to be performed in the round.) He’s also helped by William Elliott’s sets and Emily Smith’s costumes, not to mention some brilliantly playful between-scenes prop changes.

As one would expect with this difficult material, it’s the performances that sometimes hold the play back. The superb Simon Needham, the lone Brit in the cast, is in a league by himself, singlehandedly carrying the production on several occasions. He alone completely grasps the mood and language, infusing it with life and laughs. “I’m making small talk,” he tells Ruth, who answers, “It’s not small enough.” His retort: “If it were any smaller, I’d swallow it.”

Jamie Middleton, as Ruth, goes toe to toe nicely with Needham in these scenes, despite her overly upper-class, though well-done, accent, which clashes slightly with the less posh and more inconsistent dialect work of the others. Thom Mesrobian, as Reg, understands the visual comedy but can’t deliver consistent quality. And despite great energy and stage presence, neither can Heather Lea Charles (Sarah) or Ame Livingston (Annie), the latter seeming a tad too young, especially since she has eyes for Tom, played by the seemingly older Tommy Keesling. That age mismatch notwithstanding, Keesling is a strong second to Needham, capturing his character’s quirkiness while rarely losing his dialect.

If you’re not familiar with Ayckbourn’s brand of relationship comedy or haven’t visited the beautiful new Mad Cow home on Church Street, pull up a chair for Table Manners. Just don’t expect a five-course meal.