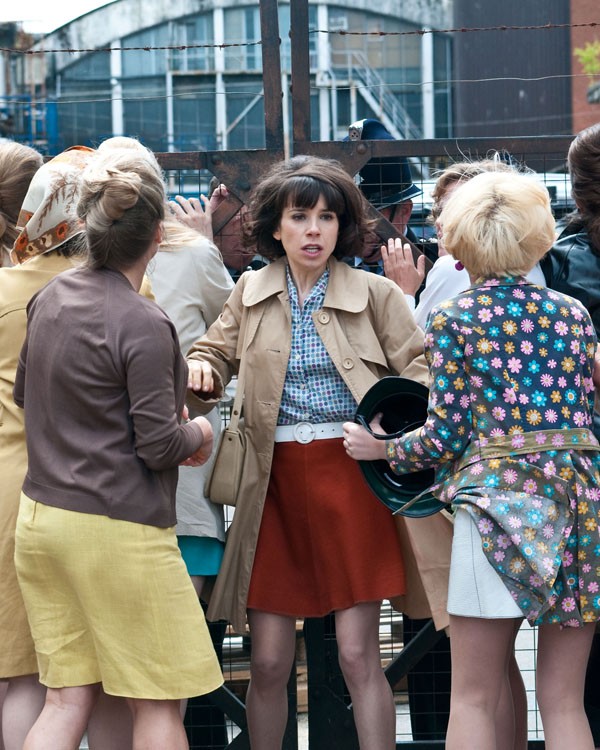 The world doesn’t seem to have as many great changers these days. Maybe it’s because cries for equal rights ring out as more of a niche interest than a noble pursuit, with everyone throwing up a Twitter hashtag for change and then patting themselves on the back. Maybe we’ve run out of Norma Raes and Martin Luther King Jr.s, (?) or maybe no one individual can make comparable headway in their respective fights as those leaders did.

Rita O’Grady (Sally Hawkins) fit the “changer” bill. In 1968, when womens’ sewing work at a Ford plant in Dagenham, London, was classified as “unskilled labor,” while mens’ assembly line duties were considered skilled, O’Grady led a strike for equal pay. It was a display of might that earned the attention of Ford execs (exemplified here by Richard Schiff) and U.K. Secretary of State (Miranda Richardson). It eventually spurred England’s parliament to follow the lead of the United States with regard to gender gap-bridging legislation.

As relayed in Made in Dagenham, though, the women’s tale of conviction fits into a very particular crowd-pleasing mold, with director Nigel Cole sticking to formula just as he did with 2003’s Calendar Girls. In Dagenham the fight for equal rights is rendered with an ever-so-bawdy sense of humor – a banner intended to say “We Want Sex Equality” temporarily read “We Want Sex” (a true-life development that was the film’s original title) – and a liberal dose of era-appropriate pop tunes on the soundtrack.

There are, of course, a fair share of Serious Moments with plenty of defiant speeches, glimpses of the financial hardships that came with closing a town’s primary source of jobs and maybe a few too many downer subplots. After all, if we didn’t have those, how would we know when to feel good again?

Hawkins depicts O’Grady as a convincingly reluctant leader, covertly urged to take action by union leader Albert Passingham (Bob Hoskins in a smirking supporting role). Richardson serves as the film’s designated scene-stealer, a woman in a position of power who is still subjected to the condescension of her male colleagues. Also in Rita’s corner: the well-educated yet shoved-aside wife (Rosamund Pike) of – wait for it – one of those stuffy auto execs, and Mr. O’Grady (Daniel Mays), an assembly line worker who suddenly finds himself caring for the kids and standing up for his wife while his fellow machinists grow restless.

Ultimately, Dagenham feels like a good movie about a great movement. In the moment, it’s a pleasant, safe entertainment that doles out story beats with assembly-line precision and whose stakes reside primarily in the performances. As a chronicle of generation-spanning progress, it’s too pat. Even behind the camera, we could use a few more changers these days.