March for Science: 'It's a little surreal' that it was necessary 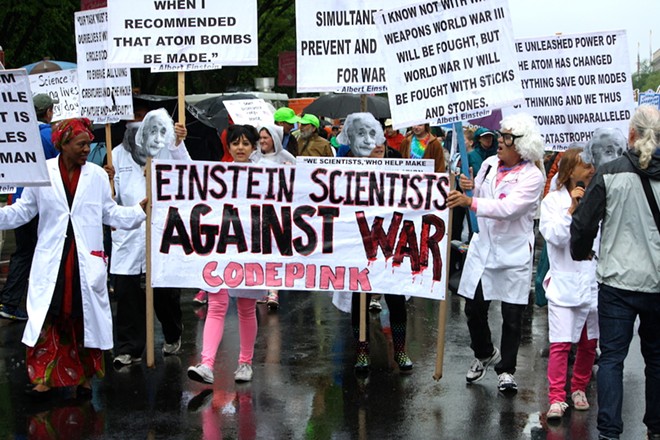 Twenty years ago I was arrested for occupying the office of Senator Pete Domenici in Albuquerque, New Mexico. The senator and one-time segregationist Dixiecrat presidential candidate Strom Thurmond had threatened to defund the Environmental Protection Agency if it did not approve the Waste Isolation Pilot Plant (WIPP).

The idea was that if you put nuclear waste in a big hole in the ground, it could be contained, sealed and isolated for thousands of years. Some studies showed it would work, but the EPA wanted additional studies. The senators wanted to move forward sending waste in trucks through our cities and then burying it deep in salt caverns in New Mexico, where some at the EPA worried it could leak.

We said we wouldn’t leave the office until they arrested us. But then the police officers burst in, red-faced, and started screaming there was a bomb threat in the building. This was shortly after right-wing white supremacist terrorist Timothy McVeigh blew up the Alfred P. Murrah Federal Building in Oklahoma City.

“Come on!” the officers yelled. I didn’t know what to do. Were they tricking us? Were they going to blame the threat on us? Was there a bomb?

I thought about that moment a lot as I trudged through rainy Washington, D.C., streets with an estimated 40,000 people – many of them scientists – a couple of weeks ago as part of the March for Science. It was on my mind partly because living in the world feels like waiting in a building that might be blown up by right-wing terrorists as cops yell in your face and senators politicize science. But this march, like my WIPP sit-in, seemed largely inspired by attacks on the EPA, whose budget Trump is proposing to cut by over 30 percent.

A week after being sworn in as the head of the EPA, Scott Pruitt – who sued the agency more than a dozen of times in his previous position as Oklahoma attorney general – said, “The future ain’t what it used to be” at the EPA, quoting baseball’s Yogi Berra.

Given Pruitt and Trump’s radical regulatory rollbacks, denial of climate science, removal of protections for federal lands and belligerent foreign policy, a lot of us are worried that the future ain’t gonna be nothing at all. That’s why people were out protesting for science all around the world.

“It’s a little surreal,” said Rob Hart, a major in aerospace engineering at Penn State who drove to Washington to march in his lab coat and goggles, about the idea of having to march for science.

He was right. It was bizarre. There were thousands of people like him wearing lab coats and goggles, carrying signs with scientific puns and equations dripping down poster boards in the rain. There was someone dressed like Beeker from the Muppets, and there was the Order of the Raven – a goth-looking crowd going for a “mad scientist” look, according to Erzsebat Ruhig, one of their members, who had stark black hair, pale sunken cheeks, and a pin on her lapel that pictured a pentagram and the scientific popularizer Carl Sagan on it.

But Code Pink, an activist group marching as Einstein Scientists Against War, seemed to be the only ones to acknowledge the complicated relationship between science and our problems. They carried masks of Einstein and signs with his words printed on them. Medea Benjamin, the founder of the group, read Einstein’s anti-war quotes through a megaphone. Like Einstein, she recognized the potentially destructive nature of science.

“Any intelligent fool can make things bigger, more complex, more violent. It takes a touch of genius and a lot of courage to move in the opposite direction,” one of the signs, quoting Einstein, read.

A week after being sworn in as the head of the EPA, Scott Pruitt said, “The future ain’t what it used to be.” Given Pruitt and Trump’s radical regulatory rollbacks, a lot of us are worried that the future ain’t gonna be nothing at all. tweet this

Sure, to have thousands of people in the streets calling for evidence-based decision-making and protesting budget cuts for science is pretty fucking cool. And we need to keep the pressure on the White House day after day. But are we also marching for the scientists of the military-industrial complex? Or for whoever is toiling away right now on the next model of nuclear missile? Don’t they, too, use the scientific method?

This march was about politics – not science. And that is not a bad thing. The scientific method cannot convince someone to apply it or to “believe in” it. Marching is not objective or peer-reviewed. And no one actually expects Trump to understand E=mc2. But when scientists take to the streets, they hope to send a political message. “You know it’s bad if I’m out here,” as one sign put it.

But when we march, we should be clear what we are marching for. The week after the March for Science, there was a long-planned Climate March. It may have been more politically effective for the scientists to come together to support the Climate March rather than holding a separate event – because it is climate science, specifically, that we need to stand up for right now. And not because we love science for its own sake, but because we love the world and it is in mortal danger.

“The unleashed power of the atom has changed everything save our modes of thinking,” one of Code Pink’s Einstein signs read. “And thus we drift toward unparalleled catastrophe.”

That’s what made me think of my fight against WIPP back in the 1990s. In 2014, a drum of nuclear waste exploded inside WIPP’s underground chamber, causing an untold amount of ecological damage – its cleanup is estimated to cost $2 billion – and exposed a number of workers to airborne polonium. WIPP was designed to last 10,000 years and barely made it to 20. Using science well requires wisdom – it is just a tool, not a panacea.

Trump’s disavowal of science is almost precisely the same as his attacks on other forms of authority, such as the press and intelligence agencies, that might limit his power. And in the same way he had me uncomfortably defending CNN – cable news brought us Trump in the first place – he now has us marching for “science.”